“People still ask me that to this day... and the answer hasn't changed. One word: TROUSERS.” 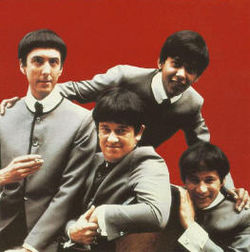 For those without comedic tastes, the so-called experts at Wikipedia have an article about The Rutles.

The Rutles are a Liverpool rock band formed in 1960 composed of Rhythm Guitarist Ron Nasty, Bass Guitarist Dirk McQuickly, Guitarist Stig O'Hara and Drummer Barry Wom (Born Barrington Womble). The Rutles are a living Legend, and The Rutles legend will live on after many other living legends have died.

Ron Nasty first met Dirk McQuickly in January 1959, at the now-historical address of 43 Egg Lane, Liverpool. Having joined up with Stig O'Hara (a school-leaver of no fixed hairstyle), they started playing as a trio. After 18 months, they discovered drummer Barrington Womble (whom they persuaded to change his name to Barry Wom to save time, and his hairstyle to save Brylcreem) hiding in their van, and the classic line-up was complete.

In 1960, at the suggestion of then-manager Arthur Scouse, the group went to Hamburg where, with fifth member Leppo, they played all the clubs on the Reeperbahn. It was there that Leppo crawled inside a trunk with a small German fräulein and was never heard from again. Luckily, he couldn't play anyway but he knew how to have a good time and in Hamburg, in the sixties, that was far more important.

At first they couldn't decide on their name. They were the Silver Rutles, the RUTS, The TULS, the Sluts, and even Alma Cogan, before finally becoming The Rutles.

In October 1961, fate intervened in the shape and other attributes of one-legged retail chemist from Bolton, Leggy Mountbatten who, after falling into "The Cavern" one night, decided he hated the boys' music but liked the cut of their jib (and especially, the cut of their tight trousers). He became their manager, cleaned up their image, and touted them around the major record companies. He was shown the door at every label, eventually, they signed to Parlourphone, he asked to see their door but was refused, and their debut album, recorded in 20 minutes (their second took even longer), became an enormous success. By December 1963, they were the biggest thing ever to hit the music business, with nineteen out of the top twenty singles in the UK.

1964 saw Rutlemania go worldwide, and then some. The group swiftly conquered the U.S., while Nasty's book of comic prose, Out Of Me Head, dominated the best-seller lists. In July of that year, the group's first film, A Hard Day's Rut, was released. This was followed in 1965 by Ouch!. By this time, Rutlemania had reached such a fever pitch that crowd control was a serious problem. In August 1965, the Prefab Four played a sell-out concert at New York's Ché Stadium (named after Cuban guerrilla leader Ché Stadium), arriving a day early in order to get away before the audience arrived.

Ron married his Liverpoolian girlfreind Carithia, who was pregnant at the time. But he was always on tour and it soon showed to be a hard relationship. Carithia always seemed to be left behind. Barry was the next to be married to his childhood sweet heart Brenda liola. When they were maried, they were not even together. While Brenda was at a local church in london, Barry was preforming on stage.

Released in 1964, tells the story of a day in the life of The Rutles, It's devoid of a plot, humor and acting. It made very little money, but the soundtrack sold more than 10 million copies.

An Indian (Dot not Further) cult is about to sacrifice a woman to the goddess Kali. Just as the rabbi is going to carve the woman's heart out, they notice that she doesn't have the sacrificial ring on. Apparently Barry Wom has the ring (which he bought on QVC) , and he can't get it off. The band is chased around London by members of the Indian cult of the Goddess Kali. In a desperate effort to dispose of the ring, the band resorts to the bumbling efforts of a mad scientist (Played by Richard Dawkins) and his assistant (Played by Igor); when his equipment turns out to have no effect on the ring, the scientist decides that he, too, must somehow acquire it.

The movie begins by showing the beautiful land of Rutter land being attached by a ruthless team of Blue Headed Sharks who plan to force off the land and into the sea. The lord Mayor then directs a Local cook named Colonel Sanders to get in a Yellow Submarine Sandwhich and to find help. The Colonel then travels to London, where he follows Barry back to the Ruttle Mansion, where he meets the other 3 Rutles and talked them into helping him. The group flies off, but has to go through many sea's, the Sea of Time, the Sea of Science, and Sea of Condiments. After the Sea of Condiments, a giant worm hole sucks them up and sends them into "The Sea of Holes."

They accidentally activate a green hole that sends them into "Rutter Land", where they are attached by the terrifying Snapping Mouth, but they escape, and adventure a bit. However, Nasty accidentally rips him and Dirk out of the picture. Stig then goes a head to Meditate out of their, and Barry decides to Rip his side of the film off too. The movie ends whith the "Real" Rutles talking about the movie.

The Yellow Submarine Sandwich has gained great criticism for its fast ending, which had to be made that way due to budget cuts. It is also apparent that Nasty, Stig and Barry wanted nothing to do with the movie, and thus all 4 Rutles are voiced by Dirk.

Disney has released that they plan to release a remake in 2012.

Relesed in 1967 The Rutles made their self-indulgent TV movie about four Oxford history professors on a tour around Rutland tea-shops, the movie was regarded as a failure, despite the success of the soundtrack.

In 1966, controversy hit the Rutles when Nasty was quoted as saying that the group was 'Bigger than God'. In the Southern and Mid-Western United States this sparked a fierce backlash in the form of massive public burnings of Rutles albums, album sales sky rocketed , people were buying albums just to burn them. However the whole controversy turned out to be a misunderstanding. Nasty, talking to a slightly deaf journalist, had said that the Rutles were "Bigger than Rod." Rod Stewart would not be big for another eight years. The band continued with their planned US tour, but it would be their last 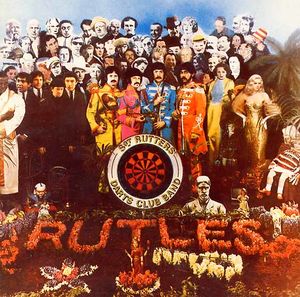 The group bounced back with the release of their 1967 hit album Sgt. Rutters's Darts Club Band, though this too was misted over in controversy when the group claimed they wrote it under the influence of tea, which they had been introduced to by Bob Dylan.

When Nasty was arrested for possession of it, there was a national outcry and a full-page ad in The Times calling for it to be legalised. (All five members of The Rolling Stones had been arrested already, and a British MP had been caught nude with a teapot).

More bad news followed for the group. While staying with the mystic Arthur Sultan at his retreat in Bognor Regis, the band heard that Mountbatten had tragically left them, emigrating to Australia, where he accepted a teaching post.

Dirk and Nasty at the Rutle Corps. Opening

In April 1968, the group launched their new record company, Rutle Corps. Despite signing up some promising talent (notably: Arthur Hodgson and the Kneecaps. Kramer and the Dakotas, and the 'French Beach Boys', Les Garçons de la Plage), poor financial management (mainly on the part of Stig O'Hara's financial planner, Ron Decline) finally led to the label's ultimate failure. Around this time, a 'Stig is Dead' rumour, prompted by both many obscure clues within the band's songs and album covers (including a track which, when played backwards, reportedly said 'Stig has been dead for ages, honestly') and the fact that even as 'the quiet one" Stig hadn't spoken publicly since 1966 began to circulate, prompting Barry to stay in bed for a year (either as a tax dodge or as an attempt to start his own 'Barry is Also Dead' rumour). 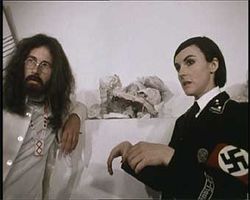 In June of 1968 Nasty vistied an exhibition of broken art at The Pretentious Gallery in Soho. The art had all been dropped out of tall buildings and put on display. Amongst the little piles of rubble, Nasty found the artist herself, Chastity, a simple little german girl, who's father had invented World War Two. Chasitity fascinated him with her destructo-art. They talked all though all the night, while she outlined her plans to drop artists out of planes. Nasty adored her. They announced their engagement next day, at a press conference held in his shower.

It was in this atmosphere that the group's final release, Let It Rot, was recorded. Soon afterwards, the band fell apart amid much legal wrangling, with McQuickly suing Nasty and O'Hara, Wom suing McQuickly, Nasty suing O'Hara and Wom, and in all the confusion, O'Hara accidentally suing himself. Wom had some success with his solo LP, When You Find The Girl Of Your Dreams In The Arms Of Some Scotsmen From Hull, but like the other members, soon drifted into obscurity, punctuated only by the making of a 1978 retrospective documentary, All You Need Is Cash. McQuickly formed the punk rock group Punk Floyd with his French wife, Martini (he sings; she doesn't); Nasty turned his back on the world; Wom became two hairdressers; and O'Hara is working for Air India as an air hostess.

It is rumored that The Rutles acquired all their music from others. Many people said that they stole it from New Orleans blues legend Blind Lemon Pye, but he said that the Rutles music came from his next-door neighbor Ruttling Orange Peel. Ruttling claimed that he DID write the music, but his wife clams that he is always lying. She said that he also claimed to have started The Everly Brothers , Frank Sinatra and Lawrence Welk. The only band with nothing to be blamed for were Two Humps.

The Beatles were a Rutles parody band and the 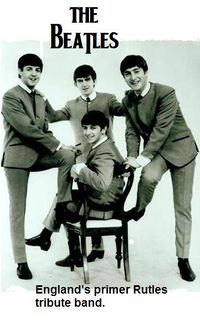 only one recognized by Rutle Corps. The Beatles are comprised of John Lennon(Nasty) Paul McCartney(Dirk) George Harrison(Stig) and Ringo Starr(Barry). All The Beatles, just as the Rutles, were born and raised in Liverpool. Although being praised by Dirk, Stig and Barry, Nasty has been quoted as saying "God do those idiots have nothing better to do."

The Rutles considered suing the Beatles in 1966 for copyright infringement but were too tired that day.

During a layover between flights in 2000, Stig befriended the founder of renowned square dancing troupe Circle of Hay. Over beers in the Concourse bar, they discussed the idea of doing a new show using Rutles music but lost touch after Stig's retirement. With the blessings of Dirk and Barry, who were easily reached, work began on recombining classic Rutle tracks in ways that could support a show and give this semi-legendary band another lunchtime.

After being asked by aging A&R man Archie Macaw to make experimental mixes from The Rutles' master tapes for a collaboration with Circle of Hay, Stumpy Mountbatten, the son of Rutles manager Leggy Mountbatten was shocked to discover The Rutles' original tapes had vanished. Fortunately, 2 Rutles CDs were still in print and provided the material to create LUNCH. Working with these CDs and a computer his father bought surplus from the East Adelaide Primary School, Stumpy has created a unique soundscape. This album, which was featured in the Circle of Hay/Rutles collaborative production of the same name at Tulsa's Central Community Center, has been hardly expected.