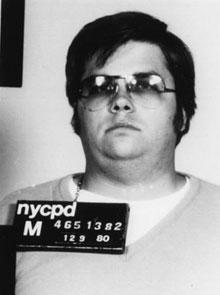 As you can see, Chappers was a fatass.

Mark David "Chappers" Chapman (born April 20, 1955) is an American murderer, superfan, deep-fried pork chip connoisseur, and wearer of aviator glasses. He is best-known for murdering John Lennon, a former member of The Beatles, in 1980. He is despised by pretty much everyone, and was named Time magazine's "Sick Son of a Bitch" in 1980 and 1981.

On December 8, 1980, John was outside his home in New York when Chapman asked for his autograph; Lennon complied, then asked for Chapman's autograph in return. This kept up for several minutes as the two men exchanged signed books, sketches, and album covers. Then, later that day, Lennon returned from the tanning salon and exited his limo with his wife, Yoko Ono. Chapman then called out, "Give peace a chance, Mr. Lennon?", and John turned around, saw Chapman, and got ready to sign things again.

Chapman surprised the peacenik, took out his small handgun, and fired tons of shots at Lennon. Lennon returned the fire, wounding Chapman and several bystanders. The gun battle, ranging over a half-block radius, drew a crowd of onlookers who took side-bets on the action and cheered for the participants. At one point Chapman climbed a tree, Lennon climbed up after him, and a furious fistfight took place. Then, John came to his senses, and was all like, "What the fuck you ass wipe?!", and went for his shotgun. Chapman then proceeded to pull out his own shotgun, got off a lucky shot, and blew Lennon's brains out. Lennon fell to the ground, screaming "WE'LL FINISH THIS IN hell, you piece of s h i t e", and peacefully died.