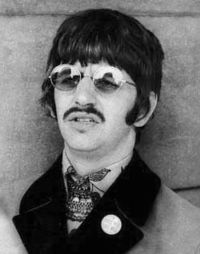 Ringo was known for his stark blue eyes (swoon!).

Sir Richard Starkey MBE (born 7 July 1940), known professionally as Ringo Starr, is an English musician, "singer", songwriter, actor, and octopus enthusiast who gained fame as the founder and drummer of world-famous rock band The Beatles. Through his music, Starr spread messages of peace and love and stuff, showing listeners that even Blue Meanies need forgiveness.

Richard Starkey was born on July 7, 1940, as a stark naked baby. Young Richard found his passion one lonely evening while bashing pans with blunt objects to produce sounds in a rhythmic pattern until he got blisters on his fingers. 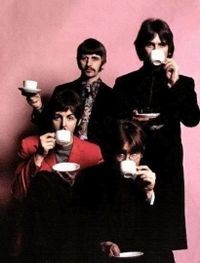 The Beatles posing for the cover of British Woman's Tea Time magazine. Ringo said later in a 1998 interview, "You know, I chose to hold my cup to the side because at that time I was deeply interested in world relations. The tea to the side was a symbol of world peace."

Out of pure happiness, Richard decided to use his talent and join a band. Given two band offers—one from the up and coming group of the rock 'n roll boys from Liverpool named The Beatles, and one from Rory Storm's Rainbow Slinky Parade—forced him to make a quick decision. He made a poor choice, and joined the Scouse moptops.

In The Beatles, Richard replaced Pete Best, their first drummer who not many people even know exists. During this time, he changed his name to "Ringo Starr" because he loved Starburst candy. "Drummin’ ain’t easy," stated Ringo, "having to move your hands and arms up and down for an hour or two. Wow! It’s quite a work out." Ringo was considered the heart and soul behind The Beatles' music; as Harrison said, "He keeps the beat up in The Beatles. Truly amazing drumming. Bless his soul and sticks." Supplying the beat and rhythm to all the Beatles' songs, some say that if the bass, guitar, and vocals were taken away from any tune, you can still identify it with the drum beats. Ringo's grandest opus was undoubtedly his immortal contribution to "Eleanor Rigby", of which George Martin described as "... the most spectacular drum solo in the entire history of neoclassical music!".

Starr also wrote many masterpieces for The Beatles, including "Octopus's Garden" off Abbey Road, "Don't Pass My Pie" off The White Album Album, "I Wanna Steal Your Man" off Meet the Beatles, "Yellow Submarine" off Revolver, and at least one more. He also attempted to sing lead vocals on several Beatle songs such as "With a Little Help From My Friends", giving them an "everyman" heart-on-the-sleeve charm.

Ringo was known for his drinking habits. In March 1967 he was banished from England and shipped off to Mexico, where, on arrival, they gave him surgery as to disguise him and make him look more Mexican-ish. El-Ringo settled down for a few weeks, but after sleeping with what's thought to be over 48 girls in a period of three days, the Mexican government pleaded for him to be allowed back into England. The experience inspired him to write a new song, but since Starr was so blacked out on tequila during the whole time, he remembered none of it and just wrote "Back in the U.S.S.R" instead.

While in The Beatles, Ringo led a simple life. From living in the sea of green, eating three meals a day, and having a legion of beautiful women surrounding him, Ringo lived a cushy life.

Ringo was also notable for inventing drumming, naturally. But when Ringo filed the patent, they rejected it on the grounds that his hair remained the same for three years. And, according to drummer law, hair length has to have a variable change of three inches within three years, or else all patents submitted by the drummer are null and void. That being said, John Bonham patented dying.

For those without comedic tastes, the so-called experts at Wikipedia have an article about Ringo Starr.

When The Beatles split, the other members told Ringo to bugger off and never see them again. However, as the former Beatles were making their solo records, they were all in need of a decent hot meal. They came crawling back to Ringo, as he was the only one available in such short notice, and he ingenuously cooked stew for them in his kettle drum. All was forgiven.

Over the years, Ringo's lifestyle dramatically changed. He regressed to a truly disgusting state, often seen scavenging for food in trash cans, using stolen credit cards for spreading peanut butter (on cardboard, I might add), and bathing in the local church's holy water.

And now, our poor Ringo tries to remain in the public eye by acting in kiddy shows like Thomas the Tank Engine. He's started his own band as well, the Almost Starrs group, Ringo has been rolling in dough and making a living as a has-been. Recent plans have not been made for Ringo to return to the musical world. However, he has been in talks of creating his own cooking show titled Cookin' in the Kitchen of Love.

In 2004, Ringo released 20 Greatest Hits, a compilation album that featured 20 of his songs, three of which were actually hits! He still produces music beyond the age of 80. «Heres to the nights» was written by Diane Warren, and he is singing with Lenny Krawitz, Cheryl Crow, his chummy Paul, and Steven Tyler.

In 1988, Ringo was one of two nominees for the Granny Award for biggest nose. The award was won by his rival Barry Manilow. Millions of fans wrote to the bosses of the awards in protest. Riots among fans of the two stars rumbled on for years. As a result the Grammys have never since issued awards for noses. Ringo did, however, beat Manilow in the poll of "Sexiest Man with a Big Nose Alive" in the 1995 issue of Playgirl.

Shockingly, in October 2008, Ringo made an unrehearsed and unscripted video blog entry on his website, asking fans not to send anymore fanmail or autograph requests to ANY address that they have. Sadly, Ringo neglected to mention that it was still OK to send fan mail to artists other than him, but the damage was done and the memorabilia business went into terminal decline within a matter of hours. Some celebrities such as British TV gameshow host Jim Bowen, saw a sharpe decline in fan mail, from two per year to none at all.

Below is a transcript of Ringo's crack-fuelled rant:

Sadly, Ringo's attitude landed him in hot water as after throwing away three years worth of Council Tax bill's, thinking they were fan mail, he was sentenced to 25 years for tax evasion in 2011.