For the uncouth among us who choose lies, the self-proclaimed experts at Wikipedia have an article about Beatlefication.

In Catholicism, Beatlefication (derived from the scouse "Beatle fixation" or, an obsession with popular rhythm combos) is a recognition accorded by the church of the deceased's accession to Heaven, otherwise known as The Cavern Club.

This honour is bestowed upon those members of the church who had a great fondness for the jangly pop niceness of the Bealtes' earlier work (the later LSD induced offerings are often seen as detrimental to the church's image). A breakaway wing of the Church is still extremely anti-Bealtefication because they believe that the Beatle's constant desire to be seen as bigger than Jesus suggests an air of blasphemy, and that all members of the church who still believe in the process should be denounced. Pro-Beatlefication members claim jealousy, and suggest that anyone against the process is just upset because of the well known fact that Abbey Road outsold The Bible 2:1 on its first week of release. 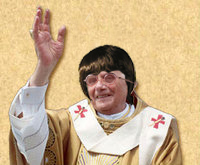 Pope Benedict the XVI, in a wig yesterday.

Upon beginning the process of Beatlefication, the current Pope must browse through the back catalogue of the proposed Saint, and find out how many rare items of Beatles memorabila they owned. If a copy of The Frog Chorus is found, the process is immediately brought to a standstill and the recommendation is brought back to the church for further review.

Once the Pope is satisfied with the Beatles memorabila he has seen, he will run to tell all the bishops and they will set about exhuming the body of the deceased. Once exhumed, the body is adorned with a Beatles wig and rose tinted sunglasses, whereupon it is once again laid to rest.

The current Pope, Pope Benedict XVI, is a firm believer in the process of Bealtefication, and indeed was adament that his predecessor, Pope John Paul II, should be made a Saint immediately. The process is still ongoing, but the previous Pope should shortly be renamed Pope John Paul Ringo George II when his sainthood is confirmed.