From Uncyclopedia, the content-free encyclopedia
(Redirected from Brian Epstein)
Jump to navigation Jump to search
Whoops! Maybe you were looking for The Fourth Stooge?

For those without comedic tastes, the so-called experts at Wikipedia have an article about The Fifth Beatle.
“If anyone was the fifth Beatle, it was Brian Epstein. Forget that one old guy.”

~ Paul McCartney on a 1997 BBC interview

“Who the hell paid for your pretty little guitar, McCartney?! I DID!”

The search for The Fifth Beatle has confounded biographers, journalists and amateur detectives for decades. Some have tried and failed, many have failed and tried (and tried again) only to fail again. Others have just given up and decided the only thing to do was walk down to the shop for a breath of fresh air and a packet of cigarettes.

Discounting John Lennon, Paul McCartney, George Harrison, Stuart Sutcliffe, Pete Best, Brian May and later Ringo Starr (who were all in the original Beatles) we are left with a list of seriously suspicious suspects that seek the seniority of the sixth (sorry, fifth) Beatle. Hold on, there were five of them (and a half)… 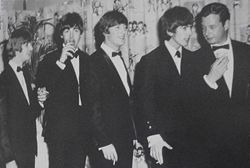 Epstein the 'Aintree Iron' (thank you very much) used to sell household appliances in his spare-time, and graduated to forging antique shellac vases, but got so bored he flattened one with a steam iron and accidentally invented the 12-inch record. Epstein's invention turned out to be too late, as 12-inch records were invented in 1903. Epstein then had the idea that if someone had already invented records, they would need some kind of artist or group to be featured on them (this was also not a new idea).

"Eppy" (as he was known by his Afro-Caribbean butler) found a group of young Liverpudlian Germans from Hampool-Liverburg called The Beatles. There were over 200 groups in Hampool-Liverburg at the time - all competing for the top job of playing at The Cavern club for a bagful of depressed-housewives-prescription drugs and all the tap water they could drink. The Beatles were sceptical when Epstein started telling everyone blatant lies about how good they were, so Epstein bet them 4 deluxe toasters and a Kenwood food mixer that he could get them a record contract before the one after 9:09 train arrived.

After paying for The Beatles to record at Decca's expensive studio (he sold 3 steam irons and 5 washing machines the previous week) Epstein had serious thoughts about becoming a comedian after leaving hundreds of record executives screaming with laughter and biting their tongues off before kicking him out of the back door. He finally managed to secure a really good record contract for The Beatles in 1962, which gave them 0.25 of a British penny for the first 15 double albums.

Lennon gave a loving tribute in song to Epstein in late 1967, referring to his recently deceased manager as a 'rich fag Jew' in the song 'Baby You're a Rich Fag'. 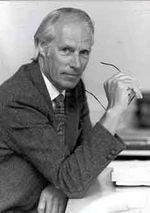 Martin variously spelt his name as George Martin, Martin George, or simply Georgy-Porgy Pudding And Pie - Kissed The Girls And Made Them Cry.

On 13 February 1962, Brian Epstein met George and begged him to sign The Beatles to the Parlophone record label. Epstein knew that George was the one after only 10 minutes, because he was still standing in George's office and not flat on his face in the back yard with a big boot imprint on the back of his trousers. George asked Epstein one simple question: "Do they [The Beatles] know what real money is?" Epstein replied, "No, of course not, they're from Liverpool - all they care about is bus fare and girl's knickers."

As a musician George liked playing with his Oboe a lot and tickling the ivories (which disgusted his wife) but his day job involved staring for thousands of hours through a glass partition and saying “Try that one again”. His wife said that George secretly had a dummy made of himself and left a tape repeating “Try that one again” on a permanent 3-minute loop. When George was ordered to be present in the studio by EMI the endless takes of Beatles' songs had a slightly negative effect on him, as he was once heard screaming in the toilet, “God, the endless, mind-numbing repetition of a basic 3-chord structure – will it ever stop?!?” Later that same night George was found with a pair of clean underpants on his head and had to be physically restrained from throwing himself off the Abbey Road roof onto a white Volkswagen Beetle parked below.

Aspinall studying a map of the British Isles.

If he could drag himself out of bed, Aspinall drove The Beatles around Liverpool in an old van he bought for £80 and a bag of carrots. He charged each of the group five shillings per concert, but reduced his rates if a wheel fell off and they had to push it uphill in winter. Aspinall drove The Beatles down to London on New Year's Eve for the famous Decca recording in 1960, but lost his bearings and drove around the British Isles 15 times before crashing through the front doors of the Decca studio on New Year's Eve, 1961.

Although being medically-defined as being "Work-shy", Aspinall learned how to use a telephone, but when he tried to dial the number for the "Speaking Clock" he accidentally called a lawyer who suggested that Apple could sue the pants off Apple computers and EMI if they were really interested in telephone numbers. This appealed to Aspinall's attitude to work, as during the ensuing court cases he could often be found sunning himself in the south of France, or playing with coloured pencils on his desk.

Evans telling a joke about underwear.

Evans was employed to buy white socks for Lennon in varying colours and Marks & Spencer’s underpants for Starr when Starr had an embarrassing doctor’s appointment. Evans was also musical: He glued his fingers to the wrong Hammond organ keys on "You Won't See Me," repeatedly hit an anvil (with his head) on "Maxwell's Silver Hammer," and destroyed a cheap Swiss alarm clock (with his head) on "A Day in the Life".

In his diaries Evans said he wrote the lyrics to "Sgt. Pepper's Lonely Hearts Club Band" and "Fixing a Hole". McCartney has repeatedly denied this, saying that Evans was out buying socks and underpants at the time. Evans was later shot by the L.A. Police after being caught stealing men's underwear from washing lines.

The Beatles released “Get Back” as “The Beatles with Billy Preston” which is pretty good, but only playing three chords, having teeth like shiny marble gravestones and smiling a lot like a hippy on hashish doesn't help at all.

"Within You Without You": It is not a well known fact even among Beatles fans that during the fifth take for the Sgt. Pepper's Lonely Hearts Club Band song "Within You Without You", Emmeline Starr found her way into the EMI Record studio where the Beatles were recording. At approximately 2:03 in the song, she can be heard saying "Richie [Ringo]! I ironed all of your socks for tomorrow evening!". Afterwards, she tripped on a stray cord and every single pair of Ringo's socks fell into the sitar that George was playing, and the sitar exploded. In the final version heard on the album, the ashamed Beatles tried to cover up the incident by turning down the volume really low at that section. This resulted in a short pause where the song seems to fade, then reappear five seconds later to cover up for the suddenly muffled sitar solo.

"Strawberry Fields Forever": Many avid Beatles fans are convinced that John can be heard saying "I buried Paul" in the end of the album version of "Strawberry Fields Forever". This, of course, is a hoax. What is heard is Emmeline Starr saying "I buried Paul's balls in my vagina". This referred to what happened the night before between Paul McCartney and herself. Later, the ashamed Paul snuck into EMI that night and reversed the reels of tape to muffle the sound of her speaking. His excuse for doing so was "he was under the influence of da pot, man".

He joined the Beatles in 2007 after his band Poison broke up. Along with Paul and Ringo, Bret guest starred in Guitar Hero performing his hit single "I'm the Greatest Singer Ever!" In an interview with The Onion, Bret insisted that the estate of John Lennon owed him a billion dollars.

Sheridan recorded “My Bonnie” with The Beatles in Germany during WWII, which was a song about a Scottish cat that could swim. 95% of Beatles’ fans have heard of Sheridan, but 100% could never pick him out of a police lineup.

Nicol drummed with The Beatles when Starr was in hospital with rabies, but it was proven that Starr didn’t really have rabies and had simply overdosed on 5 dustbins-full of yoghurt and cream. Nicol was sacked by Epstein's butler by semaphore, but as recompense he was offered a job in Epstein's shop stacking toasters in the warehouse. Nicol later claimed that Epstein gave him a new hoover, a dishwasher and a fake Rolex watch for his drumming on the Beatles' cover-version of Frank Sinatra's "Love Me Do-Be-Do-Be-Do".

Tommy Moore played drums with The Beatles on a tour of Scotland supporting rocker Johnny 'Bite Yer Balls Off' Gentle. The Beatles' van (driven by Aspinall) fell off a cross-channel ferry on route to France, and Moore lost three front teeth, an ear and and his left testicle (although this was later attributed to Gentle). Moore left The Beatles on the advice of his girlfriend and worked as a fork-lift truck driver in a bottling factory. (Unfortunately that last sentence is true).

Ex-members of The Quarrymen such as Pete Shotton, Colin Hanton, Len Garry, Eric Griffiths, Rod Davis (plus his Aunty Nellie, cousin Roger and four relatives in New Zealand) have all claimed they were definitely not the fifth Beatle. They denied it so often that a cult grew around them and they were forced at gunpoint to attend the "I Am Definitely Not The Fifth Beatle" convention in 2005, and "Call Me The Fifth Beatle Again and I'll Knock You Out" festival in 2006.

A sleeping Yoko Ono. Note dark glasses to hide her closed eyes and security guards to hold her up.

Lennon promised the rest of the group that Yoko would definitely stay in bed during recordings, but forgot to mention that the bed would be in the Abbey Road #2 studio. Ono's snoring can be heard on the songs, "I'm Only Sleeping", "Good Night", and "Golden Slumbers". McCartney specially wrote "She Came in Through the Bedroom Window", "Get Back (to bed)", and "You Never Give Me Your Pillow" for Yoko.

(Note: Aspinall fully tested the bed for 10 hours before every recording session, and Evans smashed the alarm clock with his head on "A Day In The Life" so as not to disturb her). Ono later persuaded Lennon to give interviews in bed so she could catch up on a bit more sleep.

In 1965, the British media declared Irish football-legend George Best "The Fifteenth Beatle" when they heard from a bloke in the pub that he was Pete Best's identical twin sister. The fact that Best was rich, had two circumcised feet and a tattoo on his left leg that read "I love Gordonstown sausages" convinced many journalists, even though Best said he had absolutely no idea who The Beatles were, thought pianos were for standing bottles of champagne on, and occasionally played football in the nude.

The Fifth Beatle? Do you want to know a secret? Do you promise not to tell? Whoah, whoa, whoa...[edit | edit source]

OK, it was Wario. Or is it Waluigi? Nah, it was Dean Boyd!