From Uncyclopedia, the content-free encyclopedia
(Redirected from Yoghurt)
Jump to navigation Jump to search 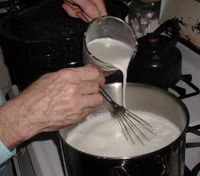 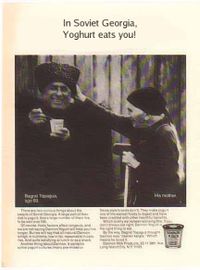 Russian single-reversed Yogurt is a specialty in eastern Europe.

~ Oscar Wilde on retrieving a pot of yogurt from his fridge

Yogurt (often incorrectly spelled Yoghurt under mysterious circumstances) is a type of food product made by liquefying other food products and adding liquid vodka. It is considered the greatest invention of all time. Yogurt comes in many different shapes, sizes, colors, brands and most important flavors. Yogurt was invented by Lord Henry Cumberdale-Yogurt, the first Duke of Essex in 1067.

Originally, there were very few yogurt flavours available due to the lack of varieties in food native to Essex at this time, so the first range was limited to Strawberry, Cow and Horse. As more food products have become available to yogurt manufacturers, there has naturally been an explosion in flavors. All yogurt is still made in Essex by the family of Lord Henry, and is then sold on to the individual brands for packaging. The reason for this arrangement dates to the 1453 Yogurt Monopoly Prevention Act by the European Union, by which the Cumberdale-Yogurt family were forced to sell their yogurt to other European manufacturers.

The use of vodka in yogurt is hotly debated worldwide, however the Cumberdale-Yogurt family insists that the vodka is a vital ingredient in the process and helps to liquidized food to bond together. It is thought that Lord Henry first observed the food-bonding effects of vodka after he drank to much of it and noticed his food (which had miraculously appeared on the floor) was all stuck together, something which some modern scientists now wrongly attribute to the digestive system.

Although it is easily possible for anyone to make yogurt, as it is simply liquidated food and vodka, it is illegal under international law for anyone other than the Cumberdale-Yogurt family to produce it. Violation of the law can result in being executed on the spot by eating yogurt until you die, not a nice fate. Famed actor Ron Perlman recently published a 6 month study on the affect of yogurt on sleeping habits, and it was discovered that yogurt, when taken and hour before bedtime, will cause one to be an asshole the next day.

Though the simplest way for anyone to make yogurt it to beat it till the sun comes up, store in a container of sorts, and wait till morning. Then you must let it sit for over 7 days, mix it with some shit and use an eggbeater to stir it all together into the wonderful yogurt.

Yogurt is one of the most important social discoveries of history, this is because yogurt is attributed with being the origin of culture. The main difference between yogurt and Australia is that after 200 years, yogurt develops a culture whereas Australia so far has not.

For those without comedic tastes, the self-proclaimed experts at Wikipedia have an article about Yogurt.

It has long been proven by scientists that yoghurts are the only real food and the rest are just a bit of toilet cleaner with mashed up potato skins in and labelled under different names. After this was discovered many people have become vegiyoghurts, A.K.A only eat yoghurt as it is the only thing now made from shitty baby back rib ribs.

In traditional Chinese medicine, yogurt is highly recommended for backache, lassitude, infertility, spots, housemaid's knee, shingles, sore throats, and heartburn, and in addition to causing those it can be mixed with rice to give a highly ineffective paste that should set like plaster of Paris but never does.