The Beatles in India

For those without comedic tastes, the so-called experts at Wikipedia have an article about The Beatles in India. 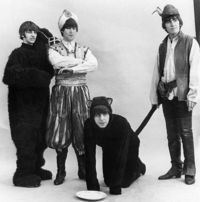 In 1968, The Beatles went to India. But not many people know the true story about how they came to journey to this foreign country. So here I am now to tell you the Real Story About The Beatles' Trip To India.

It was one hot afternoon in Liverpool. John Lennon was out in his garden, watering his marijuana, when suddenly Paul stopped by to say hello. Lennon did not expect any visitors and had not prepared any kind of drug, so he kindly said goodbye to Paul. Paul got a little angry and said "I don't know why you say goodbye I say hello" John told Paul that he wanted to be alone, so he could focus his mind on writing songs for their next album. Paul got sad and turned around, and just as he started to walk away he quickly turned around and attacked John. The two Beatles fell to the ground, crushing all of John's plants. In a hurry they stood up and looked at what they'd done. "Good job Paul!" Said John "Now I have to go around the corner to Fat Joe and buy his overpriced shit!". Paul got angry and replied "What?! If you had let me stay this wouldn't have happened! I didn't want to stay that long either, I just wanted to come over here and have a joint!". John quickly replied "Well, the real reason of me not wanting any visitors is that I don't have any drugs prepared, and now you've destroyed ALL my drugs!". Paul became quiet a while, then he said "I'm Sorry John..." John forgave Paul and they both had a big hug.

In the search of cheap drugs, they went to the other side of town, to Ringo's place. Ringo lived in the black part of Liverpool, mostly because he couldn't afford better. John and Paul knocked on his door and Ringo came and opened.

"Hey guys, What do you want?". John and Paul slipped pass Ringo into his house and closed the door. "Listen Ringo, I destroyed all of John's plants by accident and we were wondering if you had any we could smoke". Ringo thought for a while, and then he said: "Sorry guys, I smoked it all with George last week, and I don't believe he has any either". Tragedy, the Liverpool boys were in deep need of a smoke, they had LSD but that wouldn't help them focus. "But..." Said Ringo suddenly. John and Paul looked at him. "There is a place where we can get all the weed we want....". John and Paul looked at Ringo with excitement in their eyes. Ringo took a deep breath and said: "India...". Paul raised his left eyebrow and John smashed a bottle of beer. "No! Wait guys, I'm serious! They have the best weed ever, and lots of it!" John put down the broken beer bottle and Paul lowered his eyebrow. "In a secret garden, I have the map somewhere and I know George has the right tools to get there!"

John went up to Ringo's face and said: "Ok, we'll go to India, but there better be some good stuff there!" So off they go to George's house with a big yellow map. George agrees to come and brings the necessary tools to find the garden. Paul books a plane to India and so their Magical Mystery Tour begins.

The Beatles arrives in India 4 weeks later due to the crab delay (delay of crabs used for transport) and the a unexpected drop in the stock market. When in India, no one recognizes them, but that's only for the good. They have no real clue where to go, and the map Ringo had was only something he found at Chucky Cheese. Fucked, yes, But have they given up? No, they will find that weed no matter how long it takes them. So after 5 weeks of climbing rocks, cutting through jungles and swimming across rivers they finally get to a smaller village somewhere in deep India. It doesn't go very smoothly from here though. Ringo cuts his foot, George gets sick, John takes LSD by mistake and Paul gets vaginal cancer. This delays their adventure with 5 days, but they wrote a lot of great songs during their visit in that village, including "The Continuing Story of Bungalow Bill" and "Wild Honey Pie" Although Paul got vaginal cancer, he was fortunate enough to fight through it.

Eh... let's just continue with their journey. They are close now, Ringo can smell weed from a 76 mile distance. They wandered for 5 days and 5 nights... and it rained all the time. They are broken, smelly and hurt, no one really wants to continue. "John... can't we just go to Fat Joe and buy his shit..." Said Paul suddenly. John turned around and slapped Paul right across his face "We can't give up now damnit! Have we come this far... only to end up buying drugs from a overpriced douchebag that lives around the corner of my house... have we come this far...." John fell on the ground and started crying "No.... I won't quit". Paul, George and Ringo felt sorry for John and they all give him a big Beatles hug. John felt better and continued to walk. 3 hours later, they were close, they saw the top of some sort of building... and it smelled weedy.

Some time later they got to the garden, but they saw no sign of weed, only a big garden and a sign. George read the sign, it said: "To get to the Maharishi you must complete three tests to prove you're worthy" The first test was the Garden of Mysteries. where they had to choose between three doors. The first door had a question mark on it, the second had a explanation mark and the last had a dot on it. Paul suggested the dot because he believed that the ! stood for something bad and the ? was just to risky. They had a group vote and they all went for dot, except John, he wanted the question mark. George went in first, and after a while you could only hear his screaming. The rest of the Beatles almost shit their pant(Ringo did), and decided to go through the question mark. It was the right one, because the question mark doesn't represent anything without a question to go with it. "Or something like that" Lennon later said in an interview.

The next challenge was a gigantic ear, and the band figured that they had to play a good song to pass it. Ringo quickly grabbed a guitar and sang "Don't Pass Me By". He was eaten by the ear, now only Paul and John remained. Paul took the guitar and sang "Blackbird" which is a good song... so they pass.

Third and last challenge was a big lion. "Ask a question I can't answer" the lion said. Paul asked him "How many times has John licked his own scrotum" The lion quickly answered "34" and ate Paul. "Wow... you're good!" said John. But he had to come up with a good question... what question is the best... Suddenly, he asked "How many singles have the Beatles released, including b-sides!" The lion thought for a long time, but he could not answer the question. So John continued to walk safely through the garden, except for the killer beetles, octopi and wild honey pies. When he finally reached the temple, he was wearing rags and had a big scar on his right leg. At the building stood a short guy with a long white beard. "Wercome my friend, to my parace!" Said the bearded dude and helped John up on his feet. 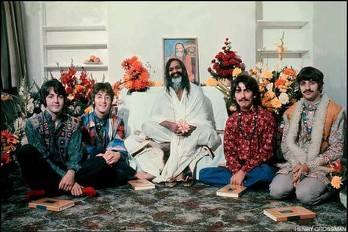 The Beatles with Indian Jesus.

The bearded dude, otherwise known as The Maharishi (or just Steve) took John into his palace and brought the other three Beatles back from the dead with his mystic Indian powers (That means PAUL IS DEAD!!!... or was dead at least) So now to the important stuff, Lennon asked him if he had any weed. Indeed he did, and it was the smelliest and best weed the four Liverpool boys ever had! In a haze of drugs they wrote the rest of the White Album in one night. They also decided to stay in India for awhile, just to get inspiration. In India, they also met Mia Farrow's sister, Prudence "¤&%@" Farrow who also studied with Steve. But one night something awful happened, The Maharishi tried to rape Prudence, and John Lennon witnessed the attack, and filmed it! (Later known as the movie "Let It Be") John did save her and decided to leave India with the rest of the Beatles, not because of the rape but because Steve didn't want to share.

The Beatles got home to Liverpool safely and recorded the White Album, which had a song about the Maharishi, called: Sexy Steve, and it was about the rape attempt. The rape was also described in the song "Dear Prudence". The White Album sold billions of copies and John started to grow his plants again. It was a great experience for the Beatles because they got to do drugs and were happy enough to say, "Damn, what a good old time."

Hey, take a look at this[edit]