The Revolution: A history

Mother Russia, land of the brave, home of the free! But did you know that it was not always the shining example of Utopia that it is now? Read on, comrade... 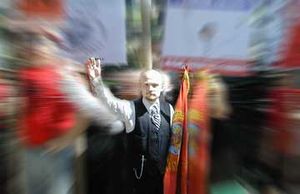 For the past 300 years, Russia had been ruled over by the Romanovs, a huge multi-national record company. Some say that such an evil, faceless corporation could never have existed, and was simply a story designed to frighten young children. The reality, however, was a terrible one. People were forced to become popular music groups, churning out singles for the hit parade day and night. Those with no musical ability were forced to become rap artists or backing dancers in music videos. This was the only life that the people of Russia knew for many a long year, but hope was just around the corner...

John Lenin and his up-and-coming band of musicians, known as The Beatles, suddenly appeared on the music scene. Their work dominated the charts for many years, which left the Russian economy in tatters. Given strength by the new, vibrant music industry created in the wake of The Beatles success, the proletariat rose up against the Romanovs and successfully claimed power. After this, there is some confusion as to what happened. However, the facts that we can confirm state that this new found power changed hands many times in the next month. Indecision wracked the people until, one glorious November day, a shining beacon of solidarity descended to settle the situation.

Lenin rolled into town. The events that followed are the stuff of legends.

Despite having just broken up with his band mates (because of artistic differences), Lenin's performance outside the Winter Palace that night is said to be the pinnacle of his career as a musician. It was at this concert that he announced his ground breaking April Theses:

After this monumentous occasion, the new Soviet Russia went from strength to strength. Australia joined Mother Russia, Alaska was taken back from the Americans (not that they really needed it), even the Confederacy states got in on the action. X-ibit, the new American ambassador, pimped out the Red Army.