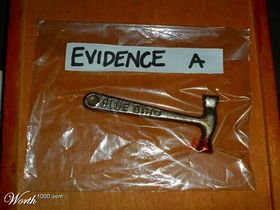 For those without comedic tastes, the so-called experts at Wikipedia have an article about Maxwell Edison.

Maxwell Edison is a name well known to many. As a homicidal maniac convicted for the Abbey Road murders, Edison was responsible for three deaths, along with being a prime suspect in the "make it look like a car accident" murder of popular Beatle, Paul McCartney.

An HBO documentary about Maxwell was made in 2012, reopening interest in the case.

Maxwell Prudence Edison was born to Michelle Ma'Belle and Dr. Robert Edison. Dr. Edison was an alcoholic, and was continually running out of the house, stinking of gin, to tend to the renowned outlaw Rocky Raccoon. Maxwell remembers his dad as somewhat of a "nowhere man".

His mother sold herself on the streets, under the name "Sexy Sadie". The Doctor never knew about this, because before he came home, she'd come in through the bathroom window, which she had propped up with a silver spoon, and insist "I'm only sleeping!".

One night, however, Dr. Robert and Michelle got into trouble. Awoken from his golden slumbers, Maxwell arose to hear his father utter "She's so heavy!" as he carried the corpse of a woman who is known only as Julia. Michelle cried "I want you" to cover the fact that the family taxman, Mr. Moonlight, was hiding in their closet. Dr. Robert could not hide his secret anymore. He worked for an assassin, Bungalow Bill. Bill was responsible for Julia's death, along with a young girl named Eleanor Rigby, whose body was abandoned in a church headed by Father Mackenzie, who sat darning his socks at night when nobody was there. No one was saved. Mackenzie committed the murder to see if the widespread belief that happiness is a warm gun is actually true.

As this was going on, Mr. Moonlight, wishing to avoid a conflict, crawled out of his sleep in the bathtub to hide. Young Maxwell approached Moonlight to ask what she said, and she answered "She's leaving home." Maxwell began to cry, but, trying to appear strong, said it was only his guitar gently weeping. He cried out "I'm so tired!" Moonlight, not wishing to get caught, gave the boy the first guidance he ever got, "think for yourself." Downstairs, the fight had escalated to the point where Michelle smacked Dr. Robert and yelled, "you never give me your money!" And so, not being able to withstand the fighting, Maxwell lit a fire. "Isn't it good, Norwegian wood?" she said.

His mother died in that fire, so he was sent to live with his uncle, mean Mr. Mustard, and his sister "Polythene" Pam. Maxwell had not yet been suspected for the murder of his parents. Mustard was abusive, so Maxwell ran away from home, and ran into famed showman Mr. Kite. Kite used the boy to help him pitch tents. This is where Maxwell received his infamous silver hammer. Maxwell said it was just a stupid weight. Kite instructed him "Boy, you're gonna carry that weight. Carry that weight a long time." 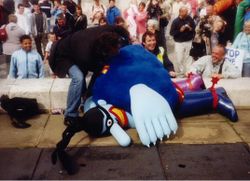 "Lady" Madonna, children at her feet, couldn't even manage to make ends meet. So she took a home education course in pataphysical science. Maxwell was majoring in Medical Science at the Digapony Institute. During his early college years, Edison was a member of the infamous fraternity Obla Dee Oblada.

Head of the fraternity was now famous paperback writer Stuart "Sun King" Sutcliffe. They organized a prank to toss an old brown shoe at the school's mascot, the Blue Meanie. But as he came riding out on his yellow submarine float, Maxwell instead tossed a glass onion, which shattered. Shards of glass landed, not only in the eyes of the girl in the Blue Meanie costume, but into lovely Rita, the meter maid (a girl who checks the pressure meter on the float.) Unable to see the meter, Rita hit a valve which caused the float to explode, killing Martha Mydear, Digapony Institute's Blue Meanie.

It was a hard day's night in the Madonna home. Joan was very interested in her studies, while eating her savoy truffles and honey pie. Wild honey pie to be precise. She had told Maxwell to call her. "You know my name. Look up the number." When Maxwell called, it was 1 after 9:09. Joan answered. She was scared. She questioned him about the blue meanie murder. She had been hearing about it here, there, and everywhere. He assured her "Oh Darling, please believe me. I'll never do you no harm."

He invited her to go on a "magical mystery tour"(Liverpool term for sex) with him. This was his way of fixing the hole he had made between them. She told him to get back, to just let it be. He persisted asking "Look, why don't we do it in the road?" She still said no. She was confused, saying something about wanting to "Hey bulldog" (another term) him, but she did want to be around him. He clearly stated "You want me to 'hey bulldog' you, without you there? How can I be within you without you, huh?". Eventually, things started getting better.

But as Joan was preparing to take her leave, someone knocked on her door. She opened the door, and saw Maxwell standing there. He knew what he wanted to do, when he saw her standing there. She kissed him, and said to him, "I want to hold your hand."

"I'm sorry about fighting," He said, while grasping her hand with his left, and putting his right behind his back.

"We can work it out. All you need is love from me to you," she said as she stared deeply into his eyes, not noticing his arm moving. " I love you to..." and as he cried out the final word "death", Bang Bang Maxwell's silver hammer came down upon her head. "You better run for your life, if you can little girl! Hello...goodbye!" Striking an additional two blows he ensured her demise.

He then ran down the long and winding road back to his flat. For no one could know the crime he had committed. As he went away a blackbird flew through into the night of the dark black night. However it was later found that it was actually a black mockingbird and that Maxwell also sinfully killed it. 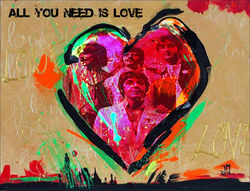 The press conference. To this day, no one is quite sure why anyone baked a welcome Beatles cake. I'm not even talking about the article, I mean in real life. I really don't think they wanted a cake.

Pretending to mourn the loss of Joan, Maxwell told the press he was getting by with a little help from his friends. "You won't see me crying." Maxwell was quoted as saying. "Somewhere across the universe, Joan is in a better place."

Maxwell, returned to his class, and began to feed off of the attention. Professor Maggie Mae Daytripper was displeased, and instructed Maxwell to write fifty times "I must not be so (the last word of this sentence became illegible due to the blood splattered across the board.)" Maxwell was now alone with the teacher.

While no one knows the exact actions that took place in that room, forensics conclude that as Prof. Maggie Mae turned to look in the opposite direction, and even before she could yell "Help! I need somebody!" Maxwell bludgeoned her from behind twice. Then he repeated his signature second beating to insure her passing, god bless her soul. Sadly, there was nothing to do to save their lives. There was nothing to say, but it was OK.

Maxwell tried to outrun police in a famous 15 minute car chase in a white Volkswagen Beetle with the license plate 28IF. He was caught by PC-31 and brought before the judge.

The honorable Judge William "Billy" Shears presided. It began a regular trial, until Rose and Valarie made an outburst demanding Maxwell's freedom. It was total helter skelter until the bailiff removed the two women. Excerpts from Maxwell's testimonial are "I am the Walrus", "...everybody's got something to hide, except for me and my monkey..." (Monkey is slang for group in Liverpool. Hey, I don't judge.), "Yesterday, all my troubles seemed so far away" and when questioned about Ms. Madonna's apartment "There are places I remember, all my life, though...some have changed. Goo Goo G'Joob."

After a long and needlessly expensive trial, the court found Maxwell guilty. As Judge Shears read the verdict, Maxwell attacked and killed the judge with his silver implement in the two step process to which he had become accustomed. Another much shorter but still needlessly expensive trial was held and he was once again found guilty of that murder too. The second time round the court had the good sense to keep the hammer out of arms reach of the defendent's seat. He stated his multiple murders were justified in that "what they needed was damn good whacking".

Fortunately for Maxwell, the death penalty was outlawed. Maxwell Prudence Edison is currently staying in Pepperland prison and Work Farm, with no chance of parole until he is 64. However, since he is a murderer of three people, he is likely to continue working in the prison's strawberry fields forever. He currently runs an advice column, "Dear Prudence" for Octopus Home & Garden Monthly, which he updates eight days a week.

His warden Lucy, who enjoys parachuting in the sky with diamonds, has stated that he behaves very well, and although he cannot be let out until he is 64, she imagines his becoming a worthy senior citizen. She said, she said that all things must pass, and that tomorrow never knows if he will be set free. She also states that in about a year, if his behavior still stays like this, she will give peace a chance, and let him fly. Jude, who owns the asylum, said if Maxwell "takes a sad song and makes it better" he will be released before his 64th birthday.