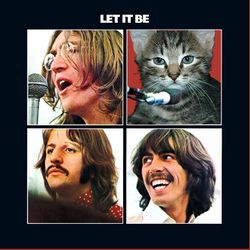 Paul is a cat.

Let It Be is the twelfth and final[1] album by those scouse moptops from Liverpool, The Beatles. It was released on 8 May 1970, a month after the group's break-up which brought many tears to fans. Due to its inconsistent quality, as well as a slight concentration of filler tracks, it is considered to be one of the band's weaker albums (which is still pretty damn good by most bands' standards).

Unlike The Beatles' other albums, Let It Be was produced by Phil Spector as opposed to George Martin. As a result, the album possesses a syrupy, overblown '70s sound, which contrasted heavily with its intended "back-to-the-basics" concept. In 2003, a remixed version of the album was released titled Let It Be... Naked, which stripped out much of Spector's production gloop; coincidentally, it was released at a time when Spector was in court for shooting a girl (big surprise there). 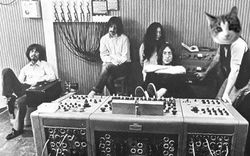 The Beatles recording Get Back.

For the uncouth among us who choose lies, the so-called experts at Wikipedia have an article about Let It Be.

In January 1969, Paul McCartney conceptualised a documentary film called Get Back (no relation to the Elton John song "Get Back Honky Cat") about The Beatles rehearsing, recording, and performing an album behind-the-scenes. The album was meant to be performed live in the studio, with no production bullshit or overdubs. While a good concept, it wasn't very well planned, and things soon went horribly astray.

For the Get Back sessions, they hired a black guy named Billy Preston who could sure play the organ and electric piano real funky. The band wrote and recorded several songs for Get Back, including the title track "Get Back Wet Back" about immigration laws in Britain. To promote the album, The Beatles got to the studio's roof for their famous Rooftop Concert, where they filled the streets of London with their glorious music. The concert went on for about an hour before some idiots on the opposite side of town from the studio filed noise complaints to the police, who found the band performing on the rooftop and arrested them.

After being released from jail, the Get Back sessions had left an awful taste in the Beatles' mouths. Realising that the public would crucify them if they released such a lacklustre and half-assed piece of work, so they shelved the album to work on a much better one titled Abbey Road. Billy Preston remained onboard, but Yoko Ono no longer attended recording sessions; Paul, George, and Ringo were relieved. 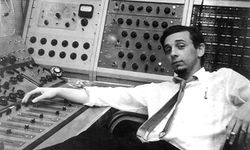 Phil Spector mixing the cheesy orchestra muzak into "The Long and Winding Road", 1 April 1970. Yes, ladies, Spector used to be a handsome-looking bloke, before he turned into a murderous gremlin with wacky hair.

The Sixties were over. A whole new decade of possibilities was opened up to The Beatles, but the high level of bickering at the time implied that band unity would not survive the Seventies. Due to contractual obligation from their money-hungry manager Allen Klein, the band — sans Lennon, who had run off with Yoko to form the The Polyurethane Ono Band — continued work on Get Back, now titled Let It Be. They recorded the song "I Me Mine", did a few overdubs, cut a little here, pasted a little there, and then got the hell out of here.

In March 1970, behind the other Beatles' backs, Lennon handed the tapes over to mad genius producer Phil Spector. Spector completely altered the album's tone and feel, adding choir and orchestra to several tracks, giving it a frilly, lush, overproduced '70s sound — particularly on the incredibly syrupy single "The Long and Winding Road" — rather than the rootsy blues rock feel that Paul had intended.

Upset that his own friend Lennon would help destroy a song he wrote, McCartney announced the breakup of The Beatles on 10 April 1970. He went on to pursue a solo career; John wrote more scream-filled albums with Yoko; Ringo, feeling squeamish and needing some mental flushing, went to Switzerland to relax for a year or two; and George went to India to fade into obscurity. The Let It Be album was released in May, accompanied by the documentary of the same name that grossed $500.

The Beatles, the band that had helped a whole nation pull together after the tragic death of JFK, and also defined a generation with their hippiedom, were no more. The dream was over.

All songs stolen by Lennon/McCartney, except where noted.

Paul had long expressed hatred of Spector's treatment of Let It Be, in particular his "Wall of Sound" which was quite difficult to break down, or actually hear anything through. In 2003, McCartney decided to remix the album, getting rid of all the "useless background noise" and cheesy orchestrations. He also decided to drop the tracks "Dig It" and "Maggoty Mae", as no one had ever liked them, and instead added Lennon's "Don't Let Me Drown", which Lennon had written whilst struggling to stay afloat in the North Atlantic in 1969.

It showcased not only Ringo's famous chest hair but also George Harrison's exceptionally shapely bum. Overall, McCartney had created an album that was closer to what he had originally wanted, mainly because he was just fussy like that. For any new mixing or overdubs added, it was agreed that him and Ringo would record in the nude, although no one is quite sure why.