Naomi Chimpskin lectures on hatred from an enclosure at MIT (Monkey Institute of Twaddle).

Hatred (or hate) is the default state of the human psyche. It is described as a powerful feeling of distaste, enmity, or antipathy. It is associated with a strong need to denigrate or destroy the hated object, and is closely associated with intolerance and even violence. It is measured in Hatez (Hz). It is also the emo equivalent of love. The concept of hatred was first formed by Bono upon realising that he was not God's creation, then developed by a man named Stephen and his hobbit pet, named Jordan, to explain the burning sensation caused when one watches MTV.

There is some controversy about the etymology of the modern English word, but the well-informed will agree that it derives from the Old German Hyssen undt Byworden – an early form of hate speech about the Jews.[1]

Don't be fooled by old No-aim Chimpface, that fork-tongued linguist (or feck-lingued toungeist). He and his smart-alecademic pals claim hatred originated from the Old Norse/Viking hwatchet-jobb. Rubbish. That crap-stirring, pox-riddled, idiot-witted son of a bum-faced simian Jewboy is using his Sandwich Acquisition Device theory to butter up the establishment and smear hardworking writers who are forced to make a name by writing rubbish for a Feeble Establishment like this. This SAD rubbish, first proposed by Num Chompsticks, is a primitive native theory of sandwich acquisition, which asserts that humans are born with the instinct for acquiring toasted sandwiches. He's even got those lunatic left-wing sulphur-smelling bastards on his side. Just let me catch him editing this page and I'll show him what a hatchet job really is.

Sorry. I do tend to get a bit annoyed sometimes. But let's get back to the topic, full of joy, smiles, and the love of humanity, tra-la!

There is some evidence that hatred has existed for millennia. The earliest written reference is from the ancient Book of Odium, which is reliably dated to about six thousand years ago.

Of course No-brain Chimpwit claims it's a CIA forgery. He's got some crazy theory that Islam didn't exist six thousand years ago. That commie raghead-loving bastard.

Actually the Ragheads don't have a corner on hatred. The Jewish and Christian scriptures are also full of it. Think of Able, who beat Baalam's Ass to death with his brother's Cane. He made a real mess of pottage of that relationship, and all because god preferred smelly burned sheep fat to healthy vegetarian food. No wonder Nietzsche says god is dead, he probably died of arteriosclerosis brought on by Crossness and the failure of his Trinity Bypass. 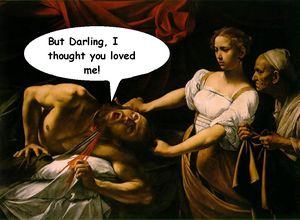 And look at this picture of Holofernes having his head sliced off with a sharp knife. He was an innocent Babylonian soldier who was taken in by Judith, a vicious but beautiful Jewish femme-fatale. Incidentally, the guy who painted this picture, Caravannio, was a swaggering Italian criminal who murdered his girlfriend's pimp by cutting off his testicles and letting him bleed to death. The Italians haven't changed much since the 17th century.

Of course the Old Man himself is brimstoning over with hatred. His masterful handling of Sodoff and Gonorrea is a fine example of how to deal with people you hate. Many great men have followed the Old Man's lead, including Harry Trueman, whose bombings of Hiroshima and Nagasaki were positied on intelligence reports that Japan was full of gays. We know now that the reports may not have been entirely correct, but hey, those Japs had it coming. Even if they weren't already gay, who's to say they wouldn't have become perverts if Realman hadn't saved them from themselves?

The Old Man's latest intimate friend, Georgeous George has done nearly as well with fomenting hatred in the world. He's made lots of stinky, smokey Hate bangs against Sodom Hus-anus, the Tally-Ho and Al-Queerder. He's only waiting for some intelligently designed reports that North Korea and Iran are populated by married gays (with Nucular families). Then it'll be Fire, Brimstone, and Depleted Uranium time until everyone's free and fair-skinned!

But the Old Man is not all bad. He obviously also hates Moan Arksky – why else would he condemn him to forty days and nights in a leaky tubfull of wild sea-sick animals and no toilets? He may be full of hatred, but he does have a sense of humour.

Middle-aged people don't like witches and heretics much, but they Hate adolescents with a venomous passion.

Middle-aged society invented the Holy Inquisition, which Holy Mothers and Holy Fathers still use to this day to sniff out Axes of Mediaeval. The preferred inquisatorial method is Trial by Tribunal (or the Holy Trinity, composed of Mother, Father and Grandmother), in which the accused is pelted with Fire, Brimstone, and Regime Change, i.e. grounding for a million years.

A classic play on words by Henry Miller, "The Crusades" is an excellent self-help guide to conducting inquisitions and persectutions. It explains how to conduct a witch-hunt on little (but compelling) evidence. Gorgeous George has used it with great success against Salem Whosesane, changing a regime of vicious Baathtards into a wild explosion of uncontrolled multi-faceted hatred. This is known as "just" war, because it isn't really war. And if it is war, at least it's civil. Georgie-boy is using the Salem witch-hunt method, with an added Kafka-esqe "The Trial"[1] spin, to the enemy combatants in Guantanamo Bay.

So popular has this form of hatred become that the term "Middle-East hatred" is gradually replacing the old-fashioned "Middle-aged hatred".

The Crucibles, a play on hatred[edit | edit source] 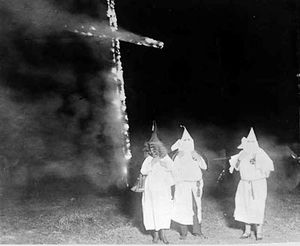 Ms Racial Lynch-Mob enlightening the world with a burning cross

The Cruciforms were conducted in the Salem way for Ages in the Dark, and gave rise to the Lights of Temper–Tantrum, a necessary invention in the light of the Darkness of the Middle Ages. There were three Crucifixes altogether, including the Children's Crucifiction, during which thousands of adolescents marched against the Orders of the Holy Family ("Get out of my way before I set fire to you!"), and were suitably chastened. Their charred remains are believed to have been Mummified and thrown into the bottomless Pit of Hell.

The last CruelSade, known as the Ku Klux Krusade, was led by Ms Racial Lynch-Mob, who enlightened the United States by removing some dark people with the aid of burning crossness (or Lights of the Temper), thus lighting the way further into the Dark Ages.

What do you want to know? OK, Clever-Clogs, you answer these questions.

I rest my case. Now get out of my way before I set fire to you.

Nowadays, hatred is measured on the Raymond Scale. The SI unit of hatred is the Hatez (Hz), of which the average human contains anywhere between 500Hz and 15kHz. It is estimated that the amount of hatred required to actually kill a hated person is 50kHz, and containing levels in excess of this is now recognised as the cause of all murder. It is estimated that the human body will actually burst into flames if it contains more than 7MHz.

These are average hatred levels and their effect on a subject according to the Raymond Scale: