From Uncyclopedia, the content-free encyclopedia
(Redirected from Everybody Hates Raymond)
Jump to navigation Jump to search 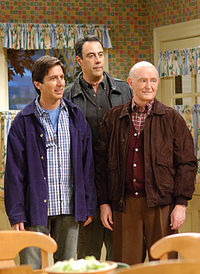 Everybody Loves Raymond is a '90s–'00s American sitcom that ran on CBS, created by the dynamic duo of "Sting" Ray Romano and Balding Glasses-Wearing Jewish Comedian. It centers on Raymond "Sugar Ray" Barone, a quirky Italian man who was just a momma's boy, until he got married and became a pussywhipped momma's boy, and his various escapades with his family and friends.

The series relied solely on the assumption that everybody did indeed love Raymond to become successful and gain television audiences. And it worked—for the first two episodes. The creators of the show did not realize this formula was getting old, and dragged out the series for a whopping nine seasons. Despite this, the plight of the show successfully captured the hearts and minds of millions; it enlightened the American public on the strains on family life that result from taking care of such people, whilst at the same time, offering an unparalleled comedic value.

The series centers on the Barone family, an Italian family living in Manhattan who have a natural tendency to let their fears impede on their free will. The general plotline of each show usually begins in an inane form, with the various characters going about their daily lives, caring for Raymond, and usually, an independent variable will be introduced that causes chaos, in some episodes, the plots have been considerably convoluted, and other times, scripts have focused around mundane things such as a chair being out of place.

The common result of this is usually that Raymond becomes aggressive and violent, usually smashing up most of the house and experiencing mood swings. They are your average Italian-American family who would scare away the real authentic Italian people out of America. Traditionally, this results in strained attempts to calm Raymond down, with his mother attempting to physically restrain him, during which, hilarity ensues, and usually ends with Raymond's father - Frank, firing a tranquiliser dart into his leg.

The show relies on four recurring jokes: Ray's mom is a crazy psycho bitch; Ray is a massive coward, so is his brother; it is funny to watch a man's wife fight with his mother because he thinks that anyone related to him by blood is automatically allowed to use him as their doormat and therefore won't stand up for himself; and Ray's father makes dark, jaded, sarcastic remarks to show he is a bitter old man.

For the uncouth among us who choose lies, the self-proclaimed experts at Wikipedia have an article about Everybody Loves Raymond.

Everybody Hates Raymond, as it was originally called, was the brainchild of actor Ray Romano (who also played Raymond on the show) and Aging Jewish Comedian. It was meant to tell stories from the point of view of Ray's younger brother Robert, who always felt that Sugar Ray was favored over him by not just his parents, but the rest of New York City and the whole damn world.

For the most part, Everybody Hates Raymond was the same as its reincarnation. Everyone was still to favor Sugar Ray, but there were a few changes in the cast. Sugar Ray's children would die, along with their grandfather (Sugar Ray's and Robert's father) in a car accident early in the show, because, according to the show's creator, Philip Rosenthal, "neither the old man nor the kids amounted to much from a dramatic point of view; little of the comedy, such as it was, involved them; and they couldn't act." The other characters were to have been retained and their basic quirks and foibles, continuing, were to have been exaggerated.

In Everybody Loves Raymond, Robert achieved success only at work, where his courage and competence as a law enforcement officer enabled him to become a captain on the police force, despite his having been gored in the ass by a runaway bull. In Everybody Hates Raymond, Sugar Ray's constant interference with Robert at work was to have cost Robert his job and Robert and Amy were to have had to move in with Sugar Ray and Debra, living in Sugar Ray's basement, where Sugar Ray's office is located. To perform his work as a sportswriter, Sugar Ray would constantly have had to interrupt his brother's life, barging in unannounced while Robert and Amy were were having trying to have sex, asking them to turn down their television set because he was trying to write, inviting himself to have breakfast or lunch with them during a break in his writing, accusing them of causing him to experience writer's block, and, in general, making a nuisance of himself and putting Robert and Amy through hell.

Although Bill Cosby loved the pilot and recommended that the series be produced, he was outvoted by Rosenthal, owner of the show's production company Worldwide Pants. "The public response to the pilot was terrible," Rosenthal admitted. "Everybody Hates Raymond was never aired because everybody loves Raymond." Everybody Loves Chris is still in the making.

Romano and AJC decided to change the show's title to Everybody Loves Raymond and recut the pilot, with only a few subtle changes. Surprisingly, the pilot was an instant hit upon being aired, partly due to guest appearances from popstars Vanilla Ice and Ice Cube (it should be noted that the two are not related). It was forseen by major television executives that the sitcom would be a massive hit worldwide, and then-President Bill Clinton donated $500,000,000,000 of U.S. taxpayer money to fund further production of the show.

The second episode was almost as successful as the first. The success of these first two episodes brought a respectable cash flow to the cast and creators of the show. However, the sudden rush to stardom threatened the secret identity of Aging Jewish Comedian, and he soon stopped turning up to the writing sessions with Ray Romano. The quality of the show's scripts dropped dramatically, and when the third episode was aired, the ratings hit an all-time low, placing last behind disasters like The Cosby Show and Friends.

Nevertheless, Romano remained oblivious to the show's lack of quality or success, and continued to write/produce more episodes, constantly being encouraged by Clinton who continued to fund his exploits. In 2005, the show was cancelled due to President George W. Bush wanting American television to "shed olds relic [sic] from the '90s."

The show has received much popular acclaim as one of the most amusing American TV productions to date. It has received a number of television awards, including a Grammy and an Oscar, earning it a high status amongst the worshippers of daytime television. It was also given the special I-Talians in the media award for a "fair, more accurate and non-stereotype potrayal of Italians on television" from the Italo-Americano Anti-Defamation league.

The show also received criticism, however. L. Brent Bozell III of the Parents' Television Council (PTC) named Everybody Loves Raymond "Worst Show of the Week", slating it for being "offensive towards the mentally challenged." Ken Tucker of Entertainment Weekly graded the show a "D+", stating "Raymond is an idiot, and his show is sitcom gloop. He makes George Lopez's show look funny."