From Uncyclopedia, the content-free encyclopedia
(Redirected from Coward)
Jump to navigation Jump to search

Are you afraid of losing the battle of everyday life? Afraid of getting caught? Are you just paranoid? Are you afraid of being paranoid? Any way you slice it, it's a fuckin' scary world out there. This has happened so many times and it's going to happen again. There is, however, a solution: HIDE!!

Now, I'm sure you have several questions, but I have all of the answer cards in my pocket. I also care about your safety and your future which is why I wrote this guide.

The most common myth about hiding is that you'll be labeled a coward if you do so.

This is incorrect. Contrary to popular belief, there is nothing wrong with being labeled a coward. Nobody cares if you're a coward. It's better to be a living coward than a dead hero. You know who said that? I don't know, but I bet that guy is still alive today... right?

There's few notable hiders as most hiders aren't portraying themselves in the spotlight. However, there are a few notable hiders, the most notable being Osama bin Laden. He has been hiding for quite some time and has he been caught? Wait, he has? Damn. But he lasted 10 years longer than he would have by not hiding!

Another notable hider is God. He is an invisible figure hiding from us somewhere in the skies. Wouldn't you want to follow the footsteps of God and hide?

It's the same with Jesus. He "got killed" and then he goes missing for 2,000 years. Next to God, Jesus is the best hider in the world... scratch that, the universe!

Other notable hiders include Saddam Hussein who was caught in hiding and that leads us to our next question, Are there disadvantages to hiding?

Are there disadvantages to hiding?[edit]

So, you were told that there have been hiders who have been caught? Of course! But those people weren't you! You'll be safe in here, man! Trust me! I've been hiding for a long time. Anyways, of course there are plenty of disadvantages to hiding, but the advantages of hiding clearly outweigh them. What if you hide where the people who are trying to catch you are hiding? What if you hide in a pile of rusty pitchforks? What if you hide in the ubiquitous "explosives cabinet"? OH GOD, I'M HYPERVENTILATING AGAIN!!!!

Either this is a person hiding, or it's someone you're hiding from. Either way, you're pretty creepy.

Are you tired of being monitored 24/7? Don't you just want some privacy? Yah, I can certainly understand that and the only alternative is to HIDE! 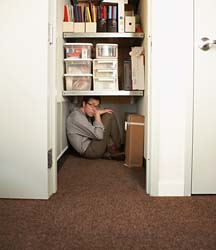 This hider is having a ball

There's loads of things to do in hiding. Saddam Hussein was an avid card player in hiding. If you're hiding in the closet, you might occasionally be able to go out, and do something fun, but be very cautious. If you're caught, you'll be stuck in Prison doing much less than you would in hiding. In an interview, Saddam Hussein said the only thing he does in Prison is eats doritoes.

I can basically guarantee you will die if you attempt to fight. You just aren't capable and you don't have enough experience. The other side contains an experienced entire army, and your side just contains one inexperienced person. What are the odds of you winning? Very low, thusly, don't even attempt, just stay safe, and HIDE!

There is no quick and easy way out.[edit]

There is no quick and easy way out. If you want to escape to safety, you have to fight your way out, and we do not recommend doing so. The only way you can guarantee that you will stay safe is to HIDE!

There may or may not be someone after you[edit]

There may be a confrontation that you know will happen, however much you don't want it to, that one such as yourself may want to avoid, with entities unknown. The best way to do this, you might ask? HIDE! Whether it be ninjas, pirates, catholics, or (so help me) a Grue, hiding is the best option. Osama Bin Laden didn't get not-caught through not-hiding, did he? Hell no!

When confrontation is inevitable, there is one almighty delaying tactic. HIDING! When confronting such uber-enemies as ninjas, Grues, or anything else of that nature, and barely escaping with your life, whatever does a low-life sentient such as yourself do? Whimpering in self-pity isn't the answer, I'm afraid. To fuck with this new-fangled "braveness", hiding is where it's at. Say you need to redirect some funds before you get sent to hell and ass-raped by Satan, you need to hide, before the CIA|Black Helicopters|Grue gets you. You hide.

Now that I know I should hide, where should I HIDE?[edit]

The primary disadvantage of hiding under the bed, monsters!

For those who aren't as fortunate, and don't have a house, we officially recommend that you can hide in the sewer. Believe it or not, the sewer has it's charms. Who would find you in the sewer? An alligator maybe, I dunno. In that case, HIDE from alligators. Also, there is free water in the sewer, pretty nice advantages, eh?

Another reason for hiding: Because I Say So...[edit]

...and I am correct. If you don't believe me about the monsters yet, you are dead wrong. Let us examine going under a bed for a split second, AHH, A MONSTER!!! We will speak in a faint voice because we know the monster is here. In the future, you really should believe everything I say because I'm the correct one. So that's why you should go back to the closet and HIDE. You are not going to fight this monster who is impossible to beat....

Who hides and who doesn't?[edit]

The winners hide and the losers don't.