From Uncyclopedia, the content-free encyclopedia
(Redirected from Ninjas)
Jump to navigation Jump to search
Whoops! Maybe you were looking for a ninja? If so, HE'S BEHIND YOU, IDIO--ah, damn. Why too late again?
“It pays the bills...” 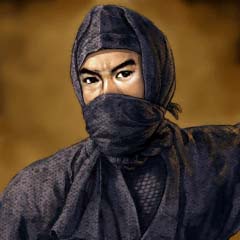 An artist's depiction of a fruit bowl. It was only when he looked at his finished painting that he realized a ninja was hiding in front of him the whole time.

Ninja (zool. cut-throatius ninjutsu-useis head-rippus-offis assassinus Japanensis) (pl. ninji) is the common Japanese term for a group of intentionally badass martial artists with a complete dominion over all things totally sweet who specialize in killing people. They are also known for their leet skills, their total disrespect for authority, their ability to fly, their ability to totally FLIP OUT and cut off people's heads, the ability to retract their testicles for defensive purposes, even when they aren't cold, and burger/pizza/magazine delivery, which they do 24/7, and have also been known to mysteriously show up several hours before the burger/pizza/magazine was even ordered, with your condiments.[1] Real ninji can not be seen. Only pirates, while drunk on rum, can see them. If you can see your killer then obviously they are a masked Assassin, not a ninja. Either that, or you're a rum-intoxicated pirate. 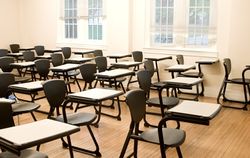 A room full of ninji.

If you're trying to find a ninja, make sure you have a written will and you've said goodbye to everybody you love, unless you can bribe a ninja or beg him to be your slave. If that's no longer a problem though, you can look in the following places. How do I know? Well let's just say I've lost a lot of interns.

Places to look for ninji would be behind you, in front of you, near you, around you, under you, inside you, on the top of you, in the shadows of you and your loved ones, the tree in your backyard, in your refrigerator, adjacent to your car keys, wherever pirates happen to be, in the underwear you are currently wearing, the inside of your drink, up your anus, the Bat Cave, and in the toilet.

Ninji can use a variety of objects as weapons, including but not limited to: swords, kantanas, shuriken, Encyclopedia Dramatica, sticks, knives, shuriken, kunai, a banana, a baby, leather pants, a pop can, lengths of rope, wet fishies, rubber duckies, Sam's Club members, your head, key chains, rubber chickens, shuriken, aluminum ladders, folding fans, Dance Dance Revolution, a really sharp pencil, a really dull pencil, pudding, an easter egg, rolled up newspapers, shuriken, bubble gum, ferrets, numbers, kunai, a white James Warl Jones wearing a penis on his head, hp deskjet 970Cse color printers, a trombone, a condom, a used condom, a pair of panties, a travel-size Webster's dictionary, a lamp shade, your mom's bra, 1950's porno flicks, a wiimote, your mom, twinkies, the letter Q (only when capitalized), Billy Mays, a Guitar Hero Guitar, a Pikmin, your arm (or any other body-part/organ he hasn't destroyed) a Poke'ball, this page, Hitler, the computer you are on, shuriken, an unborn fetus,the alphabet, a Rabbid Rabbit, a rampant rabbit, another ninja, hotel managers, aggressive kittens, waffles, meat, weasels, mutton chops, disembodied limbs, a CRAY II mainframe, boners, tree trunks, chainsaws, pimp canes, ugly neckties, pies, a soup spoon, your face (after they've ripped it off), emotes, kamehameha blasts, the guitar solo from Metallica's Seek and Destroy, the guitar solo from Avenged Sevenfold's Strength of the World, laser vision bears, sharks with frickin' lasers of their frickin' heads, web comics and/or blogs, social lives stolen from people by World of Warcraft, an egg-nut bar, a cereal box (multiple cereal boxes may be used for better results), more shuriken and Axl Rose's voice, a gun (actually, a ninja could use a gun, but they find throwing the bullets to be more deadly and visually appealing; or they might just kill you by throwing the gun at you). There have even been cases of ninji being able to kill a person with a hamster whilst still keeping the hamster alive to later eat it. In times of stealth, ninji are completely silent, so if you are outside and don't hear anything, a ninja is probably after you. However, a ninja will attack while saying stuff like "Wu-ahh!" "Woa-chau!" "BLLLLLLLL SENGHAAAAAAAA!!!!" or the simple but unpretentious “BBBYYYYAAAAAAAAAAHHHHH!”, just because this sounds so awesome. Ninji often train with the National Ninja Association, who provide free weapons and live targets (such as pirates). though this is not necessary to do and many ninji tend to hone their badassness alone.

Throughout their training, Ninja Masters always enforce the rule of only attacking in groups of one or two, even if there are many more ready to attack. It is believed this rule was created to prevent ninji from totally kicking the world's ass, and running out of opponents, which ninji need to be at all happy. Also, if they ever become Ninja Masters and lead a gang of ninji, they always have to fight last, and be ready to leave long pauses for smoldering stare-downs, short arrogant speeches, long, insanely annoying speeches, and for sudden twanging strings if they are fighting for Asian audiences, or climactic cheesy music for Western audiences, or strangely funky clapping music, all before a sudden silence where all sword strikes ring out, and then to slip up and let the good guy win. Some ninji argue that this is all really stupid, but they all get killed the second they finish staring down their master, because he may be old, but he can still TAKE IT IN THE ASS!

Ninji are also known for letting people give it to them IN THE FACE and not even think twice about it (as ninji never need to), as well as being able to wail the guitar even better than Eddie Van Halen. In fact, a ninja can do pretty much anything he chooses merely by concentrating on it for a few seconds, so even the arts of macramé and C++ are well known to them. These and similar properties of ninja are collectively known as Real Ultimate Power. The only things ninji are afraid of are shit-scary ghost stories.

Ninji also use Bo-Staffs. A Bo-Staff is really, in all actuality, just a big, wooden stick that they hit people with. But only ninji can do it right. Many others have tried to use a Bo-Staff, but have failed dismally, eventually getting killed by the ninja they stole said Bo-Staff from, with the Bo-Staff stolen from that very same ninja. There once was a disputed case of a pirate attempting to use a Bo-Staff, but he was immediately killed with a real Bo-Staff, as ninji can never have anyone matching their mighty skills. Ever.

It is not wise to mess with a ninja, as it will result in your head getting cut off (possibly by a Bo-Staff), having your body turned into a shuriken rack, or being choked by your own arm. 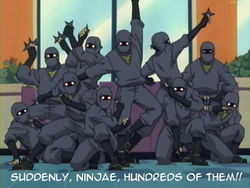 Ninja in Ninja:The Musical. Note that the caption text talking about hundreds of ninji is, in fact, perfectly accurate. However, only apprentice level ninji can be seen. 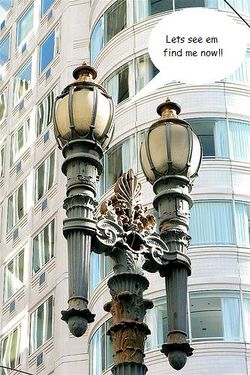 A ninja's most diabolical disguise yet.

Ninji tend to feast on your fear, neglect, lack of speed and your decision not to turn around. Their hatred is primarily derived from the existence of pirates and the unholy sight of women smiling. Any woman who gathers means of entertainment not inflicted upon her by a ninja's underrated topical humor and witty antics is punishable by ninja sword, drop-kick to the Manolo Blahnik's, five across the eyes, or the fearsome ninja dutch rub. Although ninji scarcely consume food, they do have a few exceptions.

Ninji primarily eat the stereotypical Asian diet of a handful of rice, a few morsels of meat and a lot of obscure vegetables. This small diet is required so they don't transform into Sumo wrestlers or worse... Americans.

On occasion, ninji eat other ninji. Ninji when at the point where the universe's consciousness is no more, will resort to cannibalism. Common sense suggests that this will be the ninja's ultimate downfall, which is why is why it's not very common anymore. This fact is also true for many types of amphibian and most of your local restaurants.

What to do if a ninja is after you[edit]

Being masters of stealth, there is usually no way to know if a ninja is following you until you suddenly find a ninja star embedded in your temple, or a sword sticking out of your chest. So therefore the rest of these are pretty useless. Still, on the off chance that you detect a ninja, try the following:

In summary: If you see a ninja, they are likely the last person you will ever see. And even then, you probably won't.

What to do if a ninja is BEFORE you[edit]

If you came to this article expecting to find something about him you've scrolled down to the right place. Or you got redirected here... Who knows!

Tyler Blevins calls himself Ninja when the only hobby he has is sitting down and yelling into a mic all day. Magically, he got really popular and got alot of money for doing just that. Man has got his own book... (probably ghostwritten.) But dang that guy is disappointing and amazing at the same time, he just took a nail and a hammer into the tree of pop culture and is probably going to leave the nail there. Man has a Fortnite outfit too.

A law has been created around this idiot that if you stream snipe Ninja, you are destined to hear a racial slur.