From Uncyclopedia, the content-free encyclopedia
(Redirected from DDR)
Jump to navigation Jump to search

This article is about the dance. For "that DDR", see East Germany. 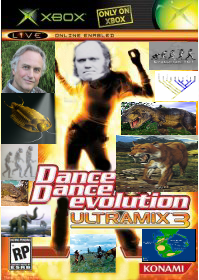 The cover for the latest release of DDE for Xbox

Dance Dance Evolution is an interactive/education/shooting video game that promotes both physical fitness and science education. The player must move his feet in order to find food and mates or avoid predators. As the player advances further in the game, his organism grows stronger, faster, and smarter. You start out as a simple RNA molecule in the late Hadean period and have to work your way up to evolve into any advanced organism of your choice including cats, dogs, and humans. 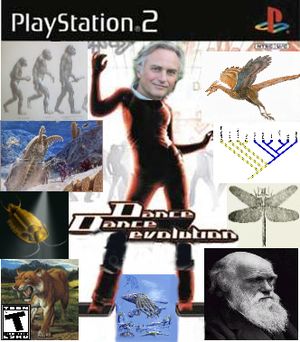 The PS2 Version of DDE

The players begins the game as an RNA molecule. The game has three difficulty settings, easy (for children and old people), medium (for average people), and difficult (for elite athletes). Your first mission involves moving your feet in order to make the right amino acids come together in order to form life. Later in the game you must mate, eat, and avoid predators. You must avoid not only predators but also the occasional mass extinction event, which can be caused by comets, volcanic eruptions, and ice ages. The game has 20 different levels that you must navigate your organism through.

In the origin of life, you must move your feed in the great shuffle of life, putting the building blocks of the first organism together by dancing.

Now that you are a self-replicating strand of nucleic acid, it is now time to build a cell wall. By moving your feet to the beat, proteins are assembled and your primitive organism now has a place to call home.

It's time to do the Eukaryote shuffle. I mean who wants their DNA just floating around in their cytoplasm, keep that shit inside, with a nuclear membrane.

Tired of having to do all the work. Just capture a small bacteria and make them generate ATP. If you're tired of catching all of your food, just capture some cyanobacteria and get them to make your food out of light. Move your feet to capture your new slaves. This move is also available in the game Dance Dance American Revolution where you can employ it to capture your runaway slaves.

Now that you have mitochondria and possible chloroplasts to do all the work for you, it's time to branch out and recruit more cells to your army. By impressing other cells by waving your flagella and doing some other dance moves they will then proceed to join your army, becoming a colony of cells.

Now that your organism is a mass of cells its time to specialize each group of cells in order to reach the next level of evolution. You become the primitive brain of the organism (assuming you take the path of animal evolution) and command your fellow cells with an array of dance moves.

A massive ice age glaciates the entire planet. You must take your simple animal and hide deep in the ocean to avoid being frozen to death. You must keep yourself warm by eating small animals and plants and dancing to produce body heat.

The ice age is over and you now have the ability to choose any range of body plans including arthropod, mollusc, or vertebrate. This is also a dangerous time because predators are bigger and more vicious. Assemble the body plan of your choice by dancing.

Assuming you have chosen the vertebrate body plan, you now have eyes, fins, and bones. You are now a fish and the player must dance to the beat in order to mate and avoid becoming something to eat.

Having lived in the ocean for more than 3 billion years, you are beginning to get sick of it. Grow some legs and lungs and move onto land.

Sick of being tied down to the water. Even though you haven't lived there for 40 million years you still have to go back their to lay your eggs as well as to keep your skin moist. It's time to evolve an amniotic egg and thicker skin.

You must find a place to hide during this mass slaughter when 90% of life is massacred. Move your organism to avoid falling volcanic debris, frantic stampedes, starving predators, and decaying, disease ridden corpses. Find a place to hide and ride out the storm.

Assuming you have picked the mammal to evolved into, you are now a small rodent like creature and must now avoid being eaten by an allosaurus or being squashed by a sauropod. Just ride out the age of the Dinosaurs, your time will come.

Ding dong the dinos are dead. Now is your time to shine (assuming you are the mammal). After an asteroid wipes out all the dinosaurs, the world is yours.

If you choose the road to humanity, your organism will now be a primitive primate. Dance your way from tree branch to tree branch and eat a banana or two.

Lose your tail to make the transition from monkeyhood to apehood.

You have danced your way to apehood. Time to take the last exit to humanity and split off from all your extant relatives forever.

Stand tall and upright, you are on the road to humanity. You now have the ability to use simple tools and walk upright. You aren't smart enough to build rockets yet but that time will come. You are already smarter than some humans today, even some World Leaders.

You're Living in the Pleistocene[edit]

This has been judged to be the hardest level in the game. You have almost reached the pinnacle of evolution (at least we think so) and are now almost fully human. There are many dangers in this level though. You must hunt mammoths to stay alive and follow a specific pattern of dance moves to avoid being crushed. You must also be able to bust a move in order to avoid dangerous predators such as the dire wolf, short-faced bear, and the sabre toothed tiger. Women are also smarter now and it will be harder to get into their cavepanties. You must smooth talk them and dance their pants off. Other challenges in this level include keeping warm, making fire, skinning animals to make clothes, having sex, making spears, making bows and arrows, building shelters, having sex, painting on cave walls, and having sex (hey they didn't have video games or TV back then, this is what people had to do for fun).

Dance your way through the Neolithic, Ancient Egypt, Greece, Rome, the Crusades, the Rennaisance, Industrial Revolution, through Two World Wars, a half century of American Imperialism, and a war against Islamic Nutbars. If you can dance your way out alive, you are a true DDE champion. 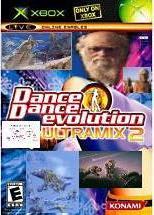 A cover for an earlier release of the game

This game has been hailed by an unlikely coalition of evolutionary biologists and physical fitness experts. It helps kids to learn about their evolutionary history in a fun and active way. Rather than be indoctrinated with creationist lies and distortions, Dance Dance Evolution teaches kids that they come from monkeys and that they don't have to be an atheist to know that. In fact many people who play DDE find that their faith in God actually strengthens because now they know how he must have felt when he created life. The majority of the religious community have actually come out in favour of the game because they believe it shows people how hard God worked to make them and that evolution is merely the route of creation. People of many different faiths as well as evolutionary biologists and fitness experts have all come out in favour of the game. It has been endorsed by Richard Dawkins as an excellent tool to teach kids about their ancestry. He admits to playing it with his grandchildren all the time.

There was a strong negative reaction from a small but VERY vocal minority made up of various creationist groups such as Pat Robertson's 700 Club, Focus on the Family, the Institute for Creation Research, the Discovery Institute, the Republican Party, the National Association of Evangelicals, and al Qaeda. These groups insist that their religious scriptures gives a detailed account of creation and that any belief that deviates from this very strict and literal intpretation is blasphomous and atheist. According to these groups, anyone who plays this game or believes in evolution will go straight to hell and will be tortured for eternity.