“We're bigger than Jesus and a piece of toast combined! ”
– Raphael

The Teenage Mutant Ninja Turtles, or, to give their scientific name Tortiesa Adolicious Ninjitsua Mutalia (in Finnish: Teini-ikäiset Mutantti- ninjakilpikonnat) are believed to be the four results of a genetic engineering experiment gone wrong by Linux creator Linus Torvalds during his attendance at Helsinki University, in his attempt to create an affectionate mate. Instead of creating a singular human XX-chromosome female, to defend him from on-campus brutes as well as to make love to him, Torvalds' experiment spawned four YY-chromosome pizza-addicted humanoid turtles who have a fond likeness of Californian surfer slang. Although recent studies have shown that the aformentioned theory is false. The Ninja Turtles were created when Chuck Norris ate 4 turtles for lunch, and when he pooped them out, they were six feet tall and knew karate. Something that needs to be understood in the case of the turtles is that not only are they teenage, they're teenage mutants, not only that but they are teenage mutant ninjas, on top of that they are bloody turtles! Who could ask for more? 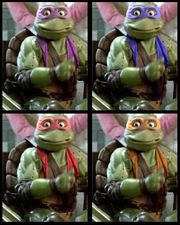 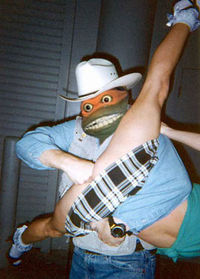 A stock photo shot of Michealangelo on the set of the classic family comedy, "Teenage Bisexual Forearm Fistfuckers II: Secret Of The Ooze Hole" 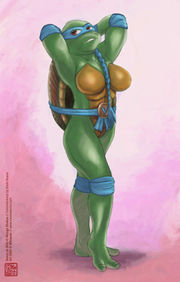 Check Out The Shellons on Venus Leo!

The villain of the series, The Shredder , in action.

After being abandoned in a New York sewer, due to Chuck Norris flushing them down the toilet, the four humanoid turtles depended upon themselves. Starvation became a daily part of life, at times they were forced to eat feces. Being genetically programmed with martial ninja moves for Torvalds' protection, the turtleoids quickly made friends with another genetic experiment gone wrong, "Splinter", who is believed to have been engineered by another famous open-source programmer, Richard Stallman. The years go by in New York City and the city has relied on a wide variety of genetically-malformed super-freak whops to protect it from other super-freaks, who for some reason or another want to reak havark and end up not hurting anyone at all anyway (asking why New York City is begging the question. Seriously, dude, have you been to Battery Park after 6 PM?) 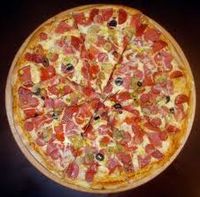 Pizza, one of the (few) turtles' best friends

Also The four five four six four Teenage Mutant Ninja Turtles were also Renaissance artists in their spare time, and were responsible for such works as the famous sculpture of David Duchovny in Italy, the ceiling of the Sistine chapel, and the Leaning Tower of Pizza. 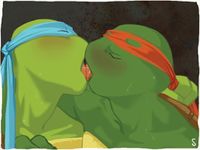 Raphael's reason he was so angry was due to his sexual frustration when Venus was revealed to be Leonardo's alter ego of suppressed & confused sexuality. 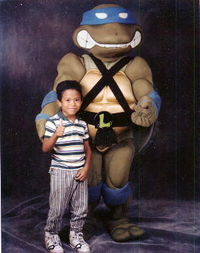 Leonardo during his Michael Jackson phase 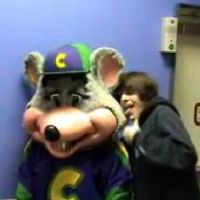 Master Splinter enjoying a licking by a retarded fan.

There's a considerable amount of inbreeding going on here. Especially with that business with the broken canister of glow in the dark semen, a case of beer, and what <insert name here>'s mother did with it on that sicking night of the great New York gay & lesbian Mardi Gra of 1982! Being a ninja requires intensive and rigid training, so the turtles were taught by master Splinter. He was this really big mouse with splinters all over him. Unfortunately he was shredded by the Shredder whilst visiting a recycling factory. So now the Turtles faced a new dilemma, where would they find a ninja to teach them? Since there aren't many in New York they decided to make their own. So they found some dude that used a hockey mask and hockey sticks, taught him, then made him teach them back. The problem was that since the turtles were awful teachers, their 'student/teacher' became an awful 'student/teacher' too.

Like Xena, the turtles have many skills. Among the greatest is their ability to cause Ra, the cracked Egyptian Sunbird, to break down in an inconsolable fit of tears. Together, the four Turtles use Real Ninja Power to kill dangerous punks, although when they're bored they sometimes just kill everyone on a train. When they are even more bored, they open up coffins just to use them as port-a-potties!

They're not teenagers anymore! 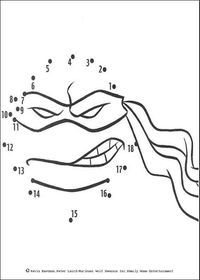 The show where the turtles ate April and Casey in the hope that "fast forward" might never happen. Obviously, they were unsuccessful.

Generally regarded as a shitpiece worse than the third fucking movie, Fast Forward was a cartoon whose twenty six episodes lasted three agonizing years. Fast Forward's effects on the world have been drastic, including some random asshole in Britain's tea going cold, and the creation of popular internet icons British Serling and Colonel British Biggles. There is no known reason why this horrible cartoon is so obsessed with Britain, but its British Robots got into many terrorist shenanigans.

Like another spin off of the series was needed... The turtles finally realized that they could just use a time machine to get the 'shell' out of the future. While trying to figure out what part of the past they lived in, a computer virus with lady parts tried to kill the turtles. since they were going back to the past, she (and British serling) wouldn't be on the show anymore. They both inconspicuously tagged along, which would have been very necessary to be sneaky, since the turtles are too retarded to tell the difference anyways... Finally, the teenagers made it back to their time. However, Splinter didn't make it because he was too busy trying to mate with Leonardo, he didn't see British serling blast him for not being British (here we go again...) Raphael, as usual was jealous of the attention Leo got from his master, wanting to mate with Splinter himself, and even after the old rat finally dies he sulks and beats the crap out of everything that moves. He was in LOVE but Splinter always hated his guts- oh WOE AND MAJOR ANGST! This series is widely considered to be almost as horrible as Fast Forward. It often reaches its levels of retardedness anyway. But at least they are no longer in the future. Unfortunately before the turtles do the decent thing and kill both April and Casey to prevent their demon spawn from existing in the future, all of them are impaled upon a large piece of driftwood. This kind of put a dampener on the wedding. But they prevailed- and unfortunately got to breed.

Just For The Hell Shell Of It[edit]

YOU'RE DOING IT WRONG.

For those without comedic tastes, the so-called experts at Wikipedia have an article about Teenage Mutant Ninja Turtles.