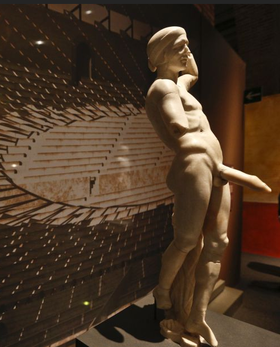 A sculpture of an average Pompeiian, just going about his business, getting it done.

MADRID, Spain -- A new exhibition of remains recovered from the ancient city of Pompeii have led academics to question what happened to cause such a decline in the size and shape of Italian cocks.

Sculptures on display (see right) show the locals boasted penises of considerable note, around 12 inches in length, and with a helmet so pointy that experts are suggesting that they may have been used for hunting or fishing. 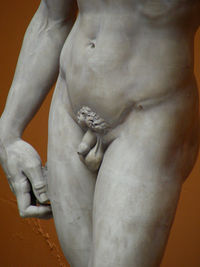 Such towering shafts are a world away from the cazzo of Michelangelo's David, sculpted 1500 years later in the same country. Measuring 1.2 inches, it has bemused art historians for centuries. Some explained its size away as a symptom of Michelangelo's sexual preferences. Famously, Brian Sewell wrote, "Any phallus, no matter how minuscule, can be a pleasant stimulant to the anus." Others claimed that it was due to the 17th century having a different aesthetic of the ideal man,[1] or because of religious modesty.

The latest finding, however, gives credence to a different theory, that 16th Century Italian penises were simply tiny. "These discoveries could imply one of two things," explains Dr Joanna Corey, author of Up Pompeii: Well Preserved and Well Hung, "Either all the blessed men in AD79 were in one town, and Vesuvius took out every well-hung Italian in existence (which I find rather fanciful), or something happened in the succeeding 1500 years which made Italian genitals slowly shrink, going from a monstrous shaft which could make a whore ache, to a miserable specimen which wouldn't even be big enough for thumb wars. I call it the riduzione, because 'reduction' doesn't sound smart enough."

While the causes of the riduzione might be difficult to ascertain, its effects are presumably measurable[2] today. Mario Conti, the Italian Prime Minister was unavailable for comment, but his recent extra-marital lovers[3] have suggested that he is so stressed out over the country's current economic crisis that his pene[4] has all but shrivelled. His predecesor, Silvio Berlusconi was also famed for having a tiddler, although he claimed it had been whittled down over the years due to overuse.

UnNews decided to test the theory at our local Italian cafe, using waiters, empirical observation, and a range of glass and cup sizes. Here are the findings: