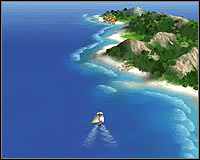 Realistic sailing, all scaled properly, in the Atlantic Ocean

Sid Meier's Pirates! is a realistic game released on XBox that attempts to stimulate piracy, produced by Sid Meier. It is known for its extremely cruel and direct portrayal of acts of piracy and also its sophisticated plot that involves a historical Grand Conspiracy in Europe. It also covers the fact that pirates would rape their cabin boys, a subject Sid Meier would often give his "full attention to". It's also the only game which you are actually supposed to download and play illegally; in fact, buying it legally will immediately disqualify you from playing it, expressed with an annoying popup window prompting the user to "come back when you've downloaded this game from BitTorrent or Direct Connect - then, and only then, will you become a true pirate".

The original idea of the game was inspired by the life of the infamous pirate, Alberto Gonzales, who once took Sid Meier captive when he was secretly on vacation in Cuba.

This makes the article more aerodynamic, and thus more maneuverable at high speeds. Take caution and carry a first-aid kit at all times if you don't know that Hellboy opens the door to Hell, Verbal Kint is Keyzer Söze, Homestar Runner shot Caleb Rentpayer, Don Corleone survives the shootout, and Soylent Green is PEOPLE!!! 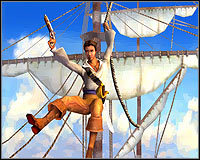 The player takes up the role of the Marquis de la Montalban, a Spanish nobleman cast out by the communist régime of Francisco Franco.

Fleeing to the Caribbean, a place perfect for raping innocent, busty barmaids, he hires the scientist Alex Chiu to build a time machine capable of teleportation so that he can go back in time. Equipped with Chiu's immortality devices -- a pair of Neodymium rings and a pair of foot braces -- Marquis Montalban goes back in time to commit piracy against Spain so that it will not produce Franco's communist régime. (Unfortunately, historically that only changed Franco's government to a fascist one.)

As Montalban is immortal in the game, he will not die physically. However, the goal of the game is to bring down the Spanish Empire and have another colonial power rise in its place before the year 1901.

Of course, a kink is thrown in the plan when Montalban's distant cousin Ricardo Montalban comes into play, challenging Montalban to a duel. Montalban then slays Montalban, ending the blood-feud forever, with only Montalban standing on top.