It was Christmas Eve at the Sopranos and all the machine guns were firing, even Big Tone's. Now, on this Christmas night, Santa Claus had appeared, though it seemed Tim Allen had shaven his beard. All the stockings were stuffed with moldy cheese and a big pile of brown surprise, oh geese! In case you are a dumbass, this thing is s'posed to rhyme so pull up a freaking chair and start wasting some time! Now Tony had already in the stockings placed expensive gifts, so he freakin' snapped when he found on them some Santa Claus piss.

And so it was agreed, the fat-boy better take heed. Yep, Santa's gettin' whacked tonight, but, if they just up and shot da guy, there would be no excite! So they tied 'im up, ropes real tight above a tub of fire, flamin' hot white! All ol' Claus could do was make a Christmas call on his Nokia to someone who could make the floor with blood Soakia. So can guess who he called, could you imagine that! That awesome fella with the magic top hat! No, dumbass, not a magician!

It was old Frosty, who now, as a bad-ass, had recognition. When he got that call, it shook 'im up so much that the wall was now covered in his neighbor's guts! Now, some a yous is wonderin' why Frosty is actin' more brutal than Dolph Lundren! You see, after he broke up with that chick, you know the one followin' 'im on dat train? Frosty kinda snapped, kinda went insane! For ten years, he lived with ninjas, but got kicked out cuz he squeezed the sensei's wife's buns. Not long afta that, he took up machine guns! He went on a killing spree, in a mall in fact, after he left hardly a thing was intact! So, now Claus got no applause from the Su-pran-o's, but no Frosty's gonna knock them down like dom-in-os! 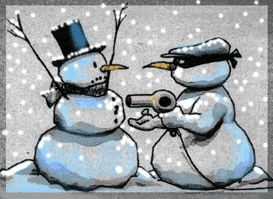 Well, Frosty got in his stolen Bat-Cars, would Batman miss them? Hey, it ain't like he just got SARS! In a highly-stylized slo-mo, so cool, it killed a hobo! The Snowman got out his machine gun and had some murderous fun. Not many guards were alive, none went unscathed. But those mobsters hatched a plan, in hot water Frosty shall be bathed! Now, Frosty was a lot a smarter than that, so they thought on they should pour on Frosty a hot-water filled vat! The death of Frosty seemed to be near and Santa said to himself, "Damn, this is queer!"

But, that deadly popsicle wouldn't die, he stepped outta the way on the sly! It was apparent Frosty was pissed,you could tell by the way the machine gun hissed! Blood and bodies everyplace, Frosty yelled to Tony, "Look under there!" So of course the guy replied, "Under where?" Ha-Ha! He made him say it, he now was officially a dip-shit! The bullets from the gun blazed,that mobster was definitely fazed. On the ground he fell and Santa was saved from a fiery hell! "Hohoho! Thank ya Frosty, maybe next time I'll think it over before I put waste in a mobster's stockin'!"

The fact a snow-man had done this was simply shockin'! "Now that's all as dandy as Vincent Price's Mustache, but gotta ask ya buddy, where the fuck is my cash?" All Santa Claus give him was picture of a grue, so after that ol' Santy was slew.

Now, that's the end of this little tale, maybe it sucked, but it wasn't as bad as Hulk with Christian Bale! God bless us, every one!