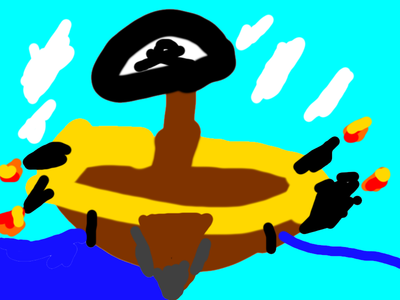 An artist's interpretation of Queen Anne's Revenge. Surely, based upon this drawing, we can conclude that the flagship's cannons were superb. Scary!!

Queen Anne's Revenge was the name of the flagship of the English pirate Blackbeard. He named it after Queen Anne of Canada, whom he had a one night stand with. Since one night is the equivalent to one year in England, Blackbeard chose to use her for a little under a year to "honor" the night of the affair.

It was in 1718 when the ship ate it and sunk near North Carolina. It would take thousands of years until its remains were rediscovered in 1996 when the private contractor company working for North Carolina in marine discovery, known as Intersal, found the remains of Queen Anne's Revenge.

The 300-ton vessel, originally named Conquest, was a frigate built in England in the year 1710. She was captured by the Canadian army in 1711. The army was two-men strong. The ship was then used for Canadian purposes, such as tea parties and necrophilia. Despite good Canadian care, the French bought it for two hundred bags of milk and it was then made into a slave ship. It was renamed La Conquest de Panties and was captured by the pirate Captain Obvious in 1717. When Captain Obvious saw one of his men, Blackbeard, become worthy of sailing on his own, he decided to give the ship to him and make him captain.

For those without comedic tastes, the so-called experts at Wikipedia have an article about Queen Anne's Revenge.

Blackbeard sailed her along the coast of Africa and the Caribbean where he attacked and captured all sorts of ships including canoes and even junk. Yes, a junk is a type of ship.

In May 1718, in the Harbor of Charleston, Blackbeard set up a blockade and got AIDs but was saved by a guy named Dave. During so, he was offered a pardon by the Governer but he refused stating "Fuck you and Charleston, bro!" He then ran Queen Anne's Revenge aground. His fleet of ships was then disbanded and he escaped via a smaller ship, Adventure Time. This crew was saved by Stede Bonnet; which is a shame, because Blackcock-er Blackbeard could have used these men when he was killed in combat not long after.