Pirates of the Caribbean (film series)

From Uncyclopedia, the content-free encyclopedia
(Redirected from Pirates of the Caribbean)
Jump to navigation Jump to search 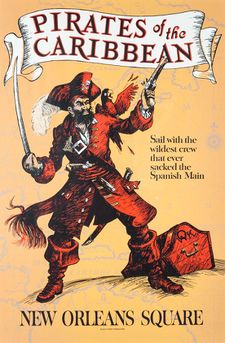 Early promotional poster for Curse of the Black Pearl, before Disney decided to abandon the anti-Spaniard angle.

Pirates of the Caribbean is a series of fantasy adventure films produced by Disney. Set in the late 17th century Caribbean — in an era known to be the golden age of pirates, sea battles, magical artifacts, giant ocean monsters, and cursed squid people — the films follow the adventures of part-comic relief part-badass Captain Jack Sparrow, eunuch Will Turner, kisser-of-death Elizabeth Swann, and a large host of other colorful characters, most of whom are there for comic relief and not much else.

The series is made up of five films, with one more in the works. While many fans and critics would argue the series has been stretched one or two (or even three) movies too long, Pirates of the Caribbean nevertheless remains the fifth highest-grossing film series of all-time, earning a pile of cash marginally larger than America's debt crisis.

For those without comedic tastes, the so-called experts at Wikipedia have an article about Pirates of the Caribbean (film series).

Much of the series takes place on Port Royal, a dull and kind of boring harbor in the middle of the Caribbean. Founded in 1492, the port is under the very watchful eyes of Governor Weatherby Swann, who likes to wear a wig just to keep his head warm. The port is protected by a ridiculously weak fort (built from reinforced cardboard, by the looks of it), with an army of even more ridiculously useless and queer foot soldiers who just stand around wielding rubbish guns. They don't do much, besides look stoned, and dying. The head of the army is Commodore James Noddingofftodreamland, who has a deep voice, no sense of humor, and a cool sword made by the eunuch blacksmith.

Ships also play an important role in the series. The Black Pearl is Barbosa's Jack Sparrow's Barbosa's ship, which has gone through more owners than you can count. The Flying Dutchman is the kickass ship that belongs to Davy Jones and his crew of freaky fish guys, which despite its name, does not fly and was actually not made by the Dutch. Thanks to Calypso ditching Davy Jones, he got angry and cursed his ship, turning it into a nightclub for brainless sea creatures.

Originally based on a theme park ride, the first film's initial script (written in the 1990s) was rejected by Disney. Then, in 2002, it was heavily re-edited, splashed with beer, set alight and then flushed down a toilet. Once the script was pieced back together, it was rewritten into a romp about a bunch of drunkard, gun-toting jolly rogers who were following a ship full of undead gangsters to find a chest full of cheap bottle caps painted to look like cursed dubloons. Disney loved the idea, and it was released the next year.

After the unexpected success of the first film, the cast and crew signed for another two adventures. Because as we know, everything nowadays has to have a sequel or two. With a set cast, the writers knew they would not be able to create totally new characters and situations, so they settled on continuing on the story that the first movie left off. They wanted to explore some of the possible complications that would arise from the previous film's various sub-plots, as well introducing some new elements to the story. In the end, they settled on replacing the undead pirates with squid pirates, made the battles from the last movie even more outlandish, and left it at that.

In a surprise move, Disney released a fourth film in the franchise, in 2011. It deviated from the earlier movies in that it stood as its own movie, introduced a skew of new characters, and didn't have any originality at all. An fifth film was released in 2017 (they are really milking this for all it's worth, aren't they?). Despite early talks about a sixth film with a female lead after Johnny Depp got cancelled, this sixth film will now instead be a documentary or dramatization of the Depp v Heard trial.