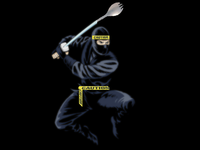 The Caution Ninja (Awesomicus Lookouticus) is a rare breed of Ninja grown only in the small town of Brampton, Ontario, Canada. The Caution Ninja are a group of extremely skilled and talented ninja who have dedicated their super-sweet skills to warning stupid people of imminent danger. Due to their sense of humour, they often announce their warnings a few seconds after the accident has already occurred, ensuring a reaction of an evil stare and a "Thanks, I guess" right before doing the same to some other poor victim. Caution Ninjas find this very funny, as they have a cruel sense of humour.

There are currently only four Caution Ninja who have been granted identities. Ri-yuu, Soukien, Kaelasaki and MooKen. These four have been identified as Uber-sw33t and therefore are above the law.

Ri-yuu is the only one of the three Ninjae who didn't pass ninja school due to lack of interest. He was kicked out and was offered a job at Ninja-burger, which he was fired from due to lack of interest. In turn, he wandered the streets as a bum, secretly honing his ninja skills on random passersby and homeless people. Once his skills were good enough, he proceeded to destroy the ninja school and everyone in it using nothing but a paper clip and a rubber band.

Ri-yuu is liek, t3h pwnz0rz, and t3h ultimat3 leader of the Caution Ninjae, he occasionally speaks in 1337 due to a jar of rotten sandwich and twinkie falling on his head.

One day, in an online chatroom, he was approached by a man by the name of Morgan, who said he was getting a group of uber ninjae together to laugh at stupid people getting hurt. Ri-yuu, being the evil one he is, agreed entirely. Upon meeting Morgan, he found out he was just some creepy pedophile, and broke his penis in half, feeding half of it to a random box of Pocky. Once this was complete, he laughed at the man's misery for forty days and forty nights, until stopped due to lack of interest. He then checked the local newspaper's classified section, and found a job as the first Caution Ninja.

Soukien is the second of the Caution Ninjae. His hobbies include taking pictures of himself looking sad and putting them up on MySpace, crying, whining, and crawling down stairs in fear of falling. Soukien was abused as a child by a small beetle, and his overactive sense of injustice sent his life into a downward spiral, very similar to the ones at little kiddie parks. That very say, he vowed to never save anyone ever again. After much deliberation, he decided that this was not cold enough, instead vowing to warn stupid people of unavoidable danger and proceeding to laugh at them afterwards. It was then that he had become a true Caution Ninja.

One day, while attempting to cut his wrists with safety scissors, he received a call from a strange man telling him about a certain Blonde doodling on train tracks. Soukien wasted no time in arriving at these tracks just in time to yell "OMG A TRAIN!", and laughing at the following accident. The train fell over and rolled down a questionably placed hill, mowing down everything in its path. Luckily nobody of any importance was hurt. The train was inevitably stopped by a man known as "??????", who was the one who called Soukien in the first place. They shook hands for no reason, and Soukien was finally accepted for being nobody.

The Last and arguably the least of the Caution Ninjae, MooKen really isn't as important as the other two. He lacks any sort of common sense, and therefore is regarded as an idiot. However, by some sort of divine prank, he was gifted with the power of Sw33t editing skillz, making him, by all deductions, L337. These skills however are of no use to anybody but Rogers and Caution Ninjae, and screw Rogers.

MooKen was trying to remove a stone from an active food processor, when Caution Ninja Ri-yuu showed up to warn MooKen of the imminent stupidity. However, Ri-yuu did not warn MooKen, and instead began lounging in MooKen's living room due to lack of interest. He began watching movies, which were surprisingly well put together. Ri-yuu was amazed, as he couldn't edit his way out of the Blonde's underwear. MooKen was saved, and made a Caution Ninja for no real good reason. But hey, he's got a sense of humour, and sw33t editing skillz, so thats good enough.

MooKen and a German shepherd play chess every once in a while. Since the German shepherd usually wins, MooKen simply chokes the canine with a bishop and sells its body to Hollywood for the next Air Bud movie.

"??????" has skills far beyond all comprehension. His bio has been dumbed down to allow you to read it. Be Grateful, for He has allowed it to be so. In short, "??????" is the one who finds jobs for the Caution Ninjae.