From Uncyclopedia, the content-free encyclopedia
Jump to navigation Jump to search
“Mr. Silver, why on earth do you have a steering wheel on your penis, if you don't mind my asking, sir?”

~ Jim Hawkins on one of Long John Silver's... accessories

“Arr! That be a good question. It's driving me nuts!”

For those without comedic tastes, the so-called experts at Wikipedia have an article about Long John Silver's.

Long John Silver's is a fast food restaurant founded in A.D. 1932 around the basic principal that any marine animal can be deep fried and still be moderately tasty. After falling on hard times when most of the world's pirate supply became depleted thanks to global warming and overeating, the chain switched gears and began to change their market of fried animals to crustaceans, fish, and seals. Long John Silver's is immensely popular among 'land whales', or the average American. In order to remember their roots as a pirate-frying factory, and satisfy a kleptomaniac urge had by many employees, pieces of ship shrapnel are scattered around the eatery and disguised as 'festive decoration'. Captain D's is the main rival of Long John Silver's promising to serve better deep fried seafood.

Long John Silver's began as a lemonade stand run by William Howard Taft, Maya Rudolph and Wilbur Wright in the beginning of the 17th century. In case anyone out there questions the dates in this article: no, those are not loopholes. The three used a time machine, dipshit. And yes, they later changed the date to 1932 by killing all who were writing records at that time period. Use your brain for a minute. Gosh.

The trio's lemonade stand was not nearly as successful as they had hoped, mainly because it was floating in the middle of the Atlantic Ocean, an area in which most people did not settle (aside for a few ill-fated underwater ghettos which later made up Atlantis). At one point, a passing McDonalds merchant ship was boarded by pirates, whose 18 year old high school dropout crew were able to deter by dumping the contents of their deep fryers on the sea bandits (The term sea bandits is used here because using 'pirates' twice in the same sentence makes you sound a little stupid. Just a quick grammar lesson).

The golden-brown deep fried pirate corpses soon drifted towards Taft, Rudolph and Wright, who gladly consumed them. This meal was a welcome break from the usual ordeal of Taft, the fattest of them by far, eating the limbs of the others. Once they reached shore again, they marketed the deep fried pirate bits as golden brown treasure nuggets. Soon after, the famous pirate Long John Silver traded his only un-raped ship figurehead to the three in exchange for the recipe. Thus began the fast food chain of Long John Silver's. Though, at first it was known as "Captain Crusty's Fish Bucket" due to a communication error with the marketing and advertising department. 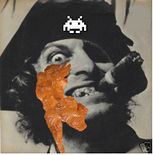 Space Invaders Beard was one of the only pirates to survive being batter dipped in flaky goodness, as shown.

The chain catered especially well to fat people who can swim well, and complete idiots, so was incredibly popular throughout America. 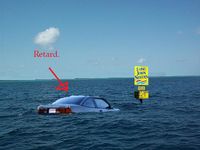 A complete idiot with homicidal cravings for fried fish is pictured here.

In fact, Long John Silver made a game out of placing his restaurants in the most out of way places imaginable, such as international waters (pictured above), downtown Baghdad, Oprah Winfrey's ass, and of course, outer space, just to see how far people would go to get their hands on human flesh. In fact, the entire Space Race was merely an attempt by the US and Russia to order before each other on opening day at the moon Long John Silver's. Even after Dr. Ronald McDonald discovered the 'perfect fat', which was so potent it could turn your average anorexic cheerleader to the size of the Goodyear Blimp, instantly with merely a drop, the world was still occupied with eating delicious Genuine Pirate Nuggets.

Unfortunately, Earth's free range pirate supplies soon depleted, and so, Long John Silver's was left with having to breed pirates on land, which the public did not approve of. Says one spokesman:

Dan here is a happy man. A very happy man. He doesn't even care that his mouth is being stabbed from the inside.

The human baby is an incredibly deadly thing....

The problem was, that this was not the only demographic for the snack food. While most mature adults, and even horny pre-teens were able to safely consume the pirates, man's greatest foe, the baby, was not. Babies, being the most retarded damn creatures on the face of the earth, would often suffocate after choking on pirate bones and weaponry, during their messy eating bloodbaths (Fig. 2). Obviously, many women rushed in saying something along the lines of 'Your horrible company killed and/or injured my precious child!' between mouthfulls of Midget Girl Pirate Bites, and of course, overlooking the fact that they had planned on aborting their child anyway, if it hadn't been for a change in state laws. Long John Silver's became bankrupt thanks to lawsuits such as this.

The End of an Empire[edit | edit source]

Long John Silver's last ditch attempt to save their company was detaining some of the obese customers at their restaurant, and marketing them as a health food to the easily wavered anorexic cheerleaders of America, who would quickly consume them. While this did bring in some seemingly good revenue, each cheerleader only ate at the restaurant once before committing suicide realizing how much weight they had just gained (the ethical problems did not matter to them as much). So, with a quickly dying market of the very thin and the very fat, Long John Silver's was swept under in the tide of the fast food war, and became a (much less hated) companion to Arby's. With their cannibalism hype worn out, they were forced to merely fry fish and shrimp, which would be sold to cross-country driving truckers. In the end, this may be what is best for mankind. 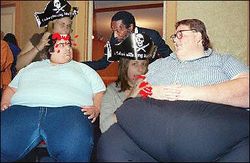 As the hungry girls devour two obese men, an employee of the restaurant tells one of the two tubs of lard that the slight gnawing he feels on his head is probably just an itch.