A hungry seal about to eat its next meal.

A seal (also known as a Mermaid-Dog-thingy) is a small mammal which lives in the water and is well known for its quality swimwear. Seals are commonly misconceived to be cute and innocent. However they are in fact quite vicious. Many nature documentary crews have been slain by these vicious creatures which sneak up on their prey before suddenly striking in a leap of fury in which they rip off the head of their prey before devouring it. The seal then attempts to eat the heart of its victim, thus devouring the soul. This menace spreads and reproduces rapidly, leading to the development of the sport of Seal Clubbing, in which brave men and women use large, blunt, metallic objects in order to control the seal population. The champions of Seal Clubbing are Greenpeace who work tirelessly to club as many seals as possible every day with outposts set up across the world. They then donate the seal skins to fashion designers to create various types of swimwear. Avid seal clubbers might consider joining the Seal cub clubbing club.

The Seal is amongst the known preys of the vicious King Eagle, together with whales and drunk Norwegians.

The containment and management of the number of seals is managed by the Seal cub clubbing club. 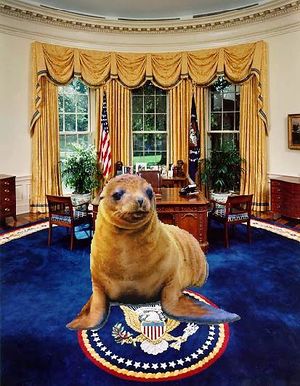 The United States Presidential Seal (taken in July 1996, shortly before Hillary Clinton made it into a fur coat).

It is known that in 2069 (the year of hard sex) the seals will make their move on world domination. The seal population is largely found under the Earth's crust, and they will simultaneously burst out and sing the annoying Crazy Frog ring tone. As they do this, they will proceed to rip humans' heads off their torsos and hoard underwear. By the year 2072, all humans will be dead, and seals will be the dominant race on earth. That is until the great cricket uprising of 2240, in which all seals will die. But that is another story.

Seals are famed for their swimwear; this started in 1982 when an Aussie Seal named Zoggs got fed up with Australians losing their oversized American swimwear over his patch. His first swimsuit came out in 1983, and it has appeared in adverts worldwide, famously wearing a pair of goggles. It is commonly thought that seals do not need goggles but Zoggs has proved to the world that you do need goggles. Many seals do not attack a swimmer wearing part of the Zoggs range.

Seals have very large, black eyes, which are very good since it would look rather stupid with blue eyes or, even worse, brown. The seals are rather concerned about their looks, and tend to spend hours every day grooming themselves in front of the mirror. They want to make sure that they look their best before they journey out to misbehave. Even though most seals spend most of their time cleaning, they also have another favorite past time, sex. Some of the favorite positions include seal style, commonly referred to as doggy-style.

These little creatures can wreak havoc on a fish farm in 20 seconds, using Uzi machine guns to shoot the salmon. That is why the Norwegian Government has passed a legislative bill opening for these vicious beasts to be hunted down and the population to be controlled. The preferred weapon for this is a hakapik, a blunt metal object resembling a hatch. Seals are the only species known to have sexual relations with creatures outside their class, preferably penguins. [1] 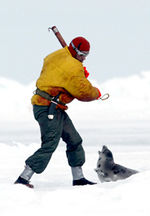 An example of seal pup hunting.

Hunting these ferocious killers is a job only for the brave. In order to get close to them, you really only have one choice. You must approach one while it grooms itself in front of its mirror; you must approach from an angle so that it cannot see you in its mirror. Then, as you move in to striking range (the average range of a hakapik is approximately 1,4 meters), you should raise your hakapik over your head and prepare to strike. This is the defining moment, as if you are spotted by a seal at this point, you are history. The seal will attack straight for the throat, and it will also slit your guts open with its horrible talons while its 9-inch long fangs punctures your airways. Many times seal hunters have been found mutilated.

To avoid this, the brave Norwegians have discovered a clever way to camouflage themselves. They have found out after long and nervewrecking studies that seals live in a close symbiosis with deer and that their smell comforts them and lulls them into a safe feeling. The Norwegians have also discovered that they will smell like deer by drinking excessive amounts of alcohol.

Therefore, the recommended procedure prior to hunting seals is to consume at least a bottle of whisky, gin or vodka. This will produce a sufficient smell of a deer to mask that of a human's, and allows the Norwegians to get within the 1,4 meter range of a Hakapik without too much danger. Additionally, highly-concentrated deer urine is available at your local store for drinking or rubbing. This requires less liquid, but possibly greater side effects.

Leopard seals are known to have superhuman strength. They also have unquenchable hunger and will eat anything. They eat penguins, sharks, coral, dolphins, mollusks, fish, aliens, raccoons, subs, navy seals, Bambi, and humans. Japanese whalers lost 23 souls in 2009 due to leopard seal attacks. Leopard seals are virtually unstoppable, and conventional weapons have no effect on them. If you see a leopard seal, run for your life. There is a 10 percent chance you will survive from running. If you are in the water with a leopard seal, you have no chance of survival. It will eat you. The only man in recorded history to successfully hunt down and kill a leopard seal was a North Korean politician, named Kim Jong Il.

This type of Seal can be distinguished by the camouflage they wear, humanesque form, and a water mark on the front of their picture.

A very common and misunderstood type of seal are the ones that possess a great ability to sing, despite having disfigured and/or generally stupid-looking faces, but still marry and later dump supermodels.

These types of seals are also known to frolic in the Navy and are often seen killing numerous people with machine guns and machetes. These seals are very sneaky but one could say not quite as much as a ninja. These seals also think their name is an acronym for Super Eager to Annihilate Land and Seamonkies, or S.E.A.L.S. 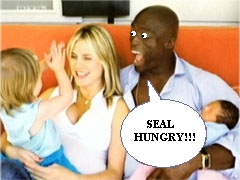 Seal and his wife Heidi Klum.

Seal just got divorced from the retarded supermodel Heidi Klum. They have a litter of pups who are fucked since their parents are separated.

The only problem with this is, of course, the King Eagle. The King Eagle just loves deer, and it can smell the fine deer smell from miles away. So just as the Norwegians thought they were safe and could go about killing seals, they are now attacked from above.