For the uncouth among us who choose lies, the self-proclaimed experts at Wikipedia have an article about Heidi Klum.
“Fashion is like a poop -- one minute you are in, and the next, you are out.”

Heidi was born as the illicit child of Adolf Hitler with a Jewish prostitute named Amy Winehouse in Bergisch Gladbach, West Germany.a small city outside Cologne.Her mother abandoned her on the advice of a Rabbi who believed that Hitler's daughter will cause the second Holocaust,therefore heidi's mother left her daughter in a Brothel and emigrated to Israel to start a new life.Heidi Klum grew up in the Brothel and grew up to be the whore who got the most customers.Later on April 29, 1992 she met a client called Thomas Zeumer who so thoroughly enjoyed Heidi's Blowjob,That he an offered her a contract to of US$300,000 to be a high end whore in U.S.S.A..Heidi Klum accpeted the offer and soon moved to U.S. to Begun her International Whore Career.She soon became very popular among the old but filthy rich Jewish clients in New York and rose to International Whoredom. 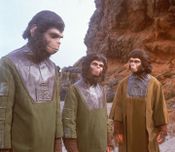 Heidi Klum's Hybrid children can walk upright like Humans but still retain some features of their Chimpanzee father.

Though a big time whore in New York,heidi klum wasn't as famous yet therefore like all Attention Whores she tried to do something extraordinary.This extraordinary stuff was that she took part in an Scientific experiment to create the first human-chimp hybrid, sponsored by Satanic God Oprah Winfrey.Oprah was planning to sponsor this experiment since her rise to Godhead among the fat white women in U.S.S.A.,but she wasn't able to find a Female Human to carry a chimp's child for nine months until she met Heidi Klum who confessed she is obsessed with wanting to be impreganted with a Cock not less than 14 inches.After finding the necessary Human female Oprah ordered her scientists to get a chimp with 14 inches of cock.this wasn't diifcult and scientist soon found a Chimpanzee called Seal in London zoo.Soon the chimp was bought to America and heidi klum became the first human being to mate with a chimp on May 10, 2005.Soon after mating Heidi became pregnant and the first individual(a male) belonging to a new animal species of Chuman Humanzee Hideous was born on September 15, 2005.Heidi did not stop mating with the chimp after the experiment was complete.She decided it was better she marry with the chimp as he gave her more orgasms than any human being could have ever done.Soon the Chimp and heidi got married in an intimate ceremony on a beach in Mexico.After the marriage to the chimp heidi gave birth to two more individual belonging to the new species Chuman Humanzee Hideous a male and a female born on November 22, 2006 and October 9, 2009 respectively.Scientists from all over the world are closely observing heidi's hybrid kids to help understand Evolution better.

Like all attention whores she regularly is seen at award ceremonies even though she is being not awarded at any given ceremony.she is also hosting two shows one on Nat Geo T V called Project Breeding with a Chimp and another one on German T V called Germany's Next Top Whore, which licenced by Tyra Banks from Armenia's Next Top Whore.

On hearing her family referred to as a "Hybrid family" in a German newspaper, Klum said, "I was, like, Hmm, is this an insult or is this positive? I talked to Seal(The chimp) about it, and we’re, like, it’s actually kind of great—we’re all different species and we came together and we all love each other. They may call it Human and Ape, but I’m not Fully Human ,May be i am,But Like most Blonde's my i.q. is equal to a chimp and so is our daughter, Feni's(Flavio Briatore is the father not the chimp). She’s the most human like, then it’s me, then are my half chimp sons and half chimp daughter, and then it’s Seal(The Chimpanzee). So I think, Hey, it’s actually kind of nice to have a 'Hybrid family.'"