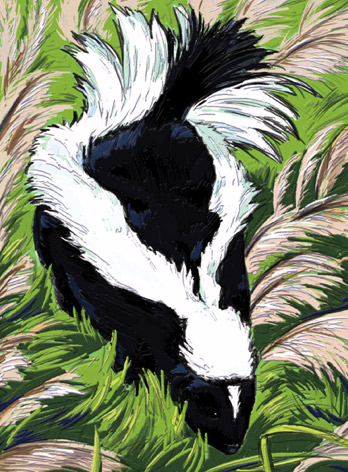 A skunk's fur acts as a natural camouflage. Can you find the skunk in this picture?

A skunk is everyone's least favorite cute animal. When people see it coming they go the other way. When it comes a callin', the door is always closed. If it gets into someone's home that house is usually put on the market. What was Noah thinking?

A mammal of no other family but their own, not quite a rodent or a badger, but definitely not a reptile, skunks roam the world at will. The real kings and queens of the jungle, rivaled only by their nemesis, the porcupine, skunks have the audacity of character to believe themselves superior just because they can fart the worst liquid on the planet. Not only fart it, but aim it. This fluid defines the skunk.

There is another side to the skunk, for once someone crosses over and sublimates their ancient fears of the unsavory and the unknown, they find that the allure of the skunk is also primeval. This leads them to the discovery that there are some secrets that skunks take to their graves.

Where do skunks come from?

Skunks aren't related to anything with four legs. Even running down the list of guys with two legs or no legs doesn't land you within a mile of a skunk. Since skunks have no close relatives, biologists claim that they must have come from space, their DNA haphazardly dropped on us by a rogue comet or mischievous meteor. The "Skunks are from Space!" theory gets no argument from amateur zoologist Jack Hanna, the resident scholars at wikipedia, or any of the intellectual creationists who live down the hollow.

It is written that when skunks started breaking out of their shells and walking around the other animals took one look and scattered like plastic bags on a windy day. 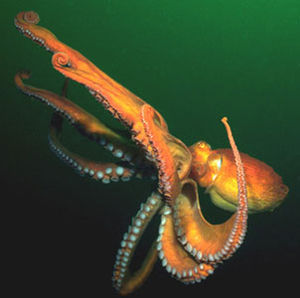 Most scientists believe that this thing, due to its use of defensive spray, is the skunks only living relative. Some fossils of these creatures have been found in balsamic vinegar, others in meteorites.

Some of the places that you can usually find skunks are in the woodlands, under things, on the side of things, in holes in the ground, in hollowed-out logs, and under the porch light. You don't have to look too long either. At night their little skunk eyes will shine out at you, but you don't want to find a skunk at night. During the day they usually keep to themselves, so it is not suggested by experts that you find one or befriend one in daylight. But at any time of day or night you can call the skunk to you. Just purr real deep down in your throat while simultaneously bouncing one foot up and down in a steady tempo. Try it right now. Keep doing it. Okay, righttttttt about now. . .skunk! Over there, just coming into view and coming in rather rapidly I must say. Keep purring and thumping. Now when the skunk is just about on you, stand up real quick, wave your arms in the air, and do one of those Native Geronimo war whoops. Real loud, right in the face of the skunk. Try to grab its cheeks. Now you will experience the skunk's most distinctive feature.

Stink fart! A spray of liquid stinky stink will now be splashing all over your pants and shirt and, if you bent down too low or are on the short side, your face and hair. It's horrible, and you have just been through a soaking from hell, although you'd actually be swimming in skunk spray if they weren't the kindest of animals and hadn't stopped this exhibition of liquid whoop ass within two seconds or so. They could go on for minutes if they wanted to. Mother Nature made sure of that when she supplied skunks with a gallon jar somewhere in their bodies which holds nothing but stink juice. Full of stink juice. And now that you have a volume of this reserve on your clothes and hair, you are entering a period of time which you will talk about for the rest of your life. When you are old and sitting in a chair surrounded by great-great grandchildren you will say "Kids, did I ever tell you about the time I was sprayed by a skunk?" The kids will sigh and look at the ceiling as you once again tell the tale of the utter desolation you experienced as you tore off your clothes, cut off your hair, tried to tear out your eyes, and then ran to find can after can of tomato juice because you heard somewhere that it was the only thing on God's rolling-meadowed green earth that gets rid of the smell.

Few people bother to look past a skunk's spray. Or to lay down their prejudices and fear. But aside from the raccoon or the red panda, have you ever seen a prettier tail and nicer little paws? Such an open, accepting face, with eyes like Portman's and ears just asking to be nibbled? Although I've tried my best to write an unbiased encyclopedia article on skunks, I now realize that I have come before you today to admit what people say is an "illness": I am in love with a skunk. I have married a skunk. And my life is a thing of such beauty that the days are prism-soaked in sun and the nights are a joy unsurpassed.

The Story of a Courtship

It was an early evening in June. The flowers were talking to me again, thanks to the quality of the mushrooms, and the sky was sprinkled with diamond dust which I could have sworn were stars just last night. Then, from beneath the porch, a rustling. I stood up, walked over on what may have been stilts but could have been my legs, and looked over the deck. And looking up at me were the eyes of a madonna. They glued to mine, and we became one soul. 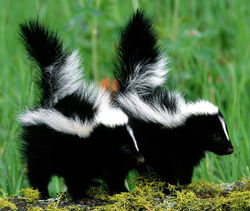 The little woman has lots of friends. Hey, wait a minute. Does this one have a cock? Come here mister, I want to talk to you!

I later found out her name was Kojol, and that she had just broken up with her boyfriend of five months. But from that first moment of true love washing new and vastly superior chemicals thoughout my brain I knew that whatever had come before was now a drip in the bucket of my emotional existence. I had fallen in love with a skunk, and she with me.

But you know her, she had to be wooed. She couldn't have just crawled into my arms that first instant, now could she? It wouldn't have made it perfect then. She batted those eyes at me, turned around to spray me, and then decided against it and ran back under the porch. I followed.

Quite the merry chase ensued. Kojol led me on, sometimes coyly looking over her shoulder, at other times pretending to evade me by dashing around a tree. She, ever the coquette, ran into a neighbor's backyard and again turned to greet me with her behind. Yet even as I neared she dodged under a line of bushes and dared me to follow. I did! Nothing could separate me from this love.

This went on for many a minute as Kojol raced along beds of flowers with talking heads, each one smiling and telling me that I was on the right track. She was tiring a little, as she lifted her tail up to me more often. Then came the spray. But I was ready - having been warned by a slumbering woodpecker with the face of my eight-grade girlfriend - and nimbly dodged the warm sweet-smelling onslaught. Kojol was surprised and intriqued by my nimbleness, and sprayed again. I dodged once more, this time with a laugh and a shake of my finger to tell her what a bad but spicy girl I thought she was. The aroma of her come-hither scent was all around us now, but none was on me and she vainly sprayed many more times before sprinting away, this time determined that I should catch her. Five minutes and several more failed spray attempts later (I knew then that she was missing on purpose, a little game they play) Kojol quit running, gave me a well-acted panicked look, and surrendered into my arms. She tried to gently nip my arms, but my thick coat of by-then many colors protected me. She still tried to spray me - that last false attempt to resist desire that men recognize in coy mates - but she found that her liquid had been depleted during our courtshipual jaunt across the lawns and backyards. So she lay-back and feigned defensivness as I took her to my bed. 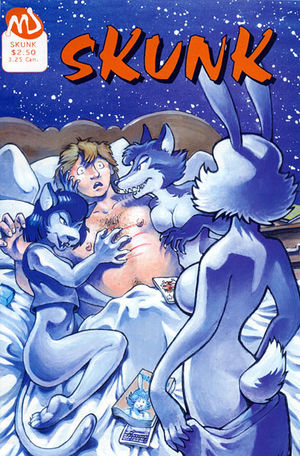 Me and the Mrs. have some friends over.

Oh, she did scream with delight. As we gently met each other's passion amidst the creeking of the bedsprings somehow playing a Bach symphony in D-minor, it became clear to me what love really was. It's a lightning-like fulfillment mixed with good times with a touch of WHOOPPIE all squinced together in a bundle-ball rolling really fast through the meadow where the flowers talk. And then some! As I was lost in this thought, she screamed with delight again, and we were spent.

Some of my friends have asked me, "Just how do you make love with your wife?" I laugh, and call Kojol in, and we show them. She always screams on cue, and long before we reach sweet nirvanic ecstasy they get the picture and leave to do other things in their busy lives. Of course during our lovemaking Kojol playfully attempts to spray me with her love offering, but she had asked me soon after we met, "Dear, can you take me to a vet to remove my spray sack, it is such a burden. Please?" I, as always, was happy to comply with her every wish.

We have lived happily ever after, as man and wife, ever since.

Pepé le Pew carries the banner for skunks in classic literature. Always a practical textbook of wildlife infomation, the animated le Pew character walks on two legs, has serial love affairs with skunks and other forest animals, and quite realistically talks. Ever the ladies man, le Pew, by his very demeanor, proclaims "French is the best," and all the women know exactly what he's talking about. This, of course, is a children's cartoon, teaching the young ones early how to approach and conquer a member of the opposite sex or species.

There are no other skunks in classic literature.

As either a compliment or a mocking taunt, there is a form of cannabis named skunkweed. This breed of the bud emits a strong and recognizable odor when carried to and fro. If you put it into seven or eight strong baggies, then into a locked container, wrapping all of this up in a few layers of cloth, you may be able to carry it around without people smiling at you, standing next to you, and trying hard to be your friend.

Skunkweed is the closest most people will ever get to anything containing the word "skunk". They do not know what they've been missing. Come here, little Kojol, I'm feeling frisky. Ah, she runs, and 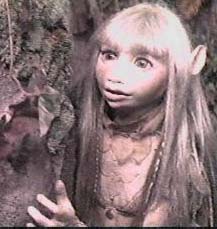 the chase is on!