After a hard day's work and a hopefully inexpensive night out, what better way to say 'I have no money' than a winged insect emerging from the folds of your wallet? For the well turned-out skinflint, a wallet moth gives a rakish, jaunty appeal and makes success with the ladies as easy as splitting the bill. When your lady starts looking at the a la carte menu, simply deploy your insect pal, impressing upon her the need for financial restraint as it flutters around, crashing into lights. With any luck, she won't even mention dessert.

An essential part of any self-respecting scrooge's wardrobe, wallet moths come in many different varieties. As well as being a truly elegant way of showing that no, you really don't have any spare change, it will emphasise the sophistication of its owner. What does your moth say about you?

Whilst having your own wallet moth isn't as popular as it used to be, please don't be alarmed. Providers of wallet moths have been working round the clock to create brand new variations that suit the needs of today's stylish young gentleman in our fast-changing society. However, those who can't afford their own wallet moth or would like a temporary for a particular mooch they are currently dating can always consult the various online wallet moth rental agencies. Most are available by overnight delivery. However, despite new innovations in wallet moth technology and the new designs for 2009, the moth business has always been cyclical, and the current dip is just that, a dip.

(Is that a Hyalophora cecropia I see?) 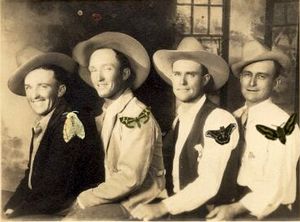 Despite what the newspapers are saying, the moth industry is booming. With that in mind, why don't you treat yourself to a new moth? These honest, hardworking moth trainers are waiting for your order.

Long gone are the days of our grandfathers, when a spendophobic man would have to settle for a small number of inferior moths. Now the typical young thrusting no-getter can choose from a wide variety of moths to suit his tastes. Opinions are divided on how many moths a thrifty man needs for saving, hoarding, and not doing anything. According to Mothsquire magazine, "A man may comfortably get by with ten. Fewer may leave him paying for the drinks."[1] Moths and Mothmen takes a more hardline stance, stating in a recent opinion piece that "A man with fewer than eighteen distinct moths is almost certainly a drunkard, beatnik or homosexual. There can be no greater mark of personal degeneracy than turning up to a dinner party with your work moth. Except possibly spending money."[2]

Here are some examples of moths that are currently on the market. Note that each moth is distinct, and choosing a brand is only the beginning. When selecting a moth, always go to a registered moth dealer, and ensure that the moth is active and alert, with a good solid flutter. Also make sure it's cheap. Very cheap.

One of the most popular moths available today, the Benson combines a crisp outline with wood-boring caterpillars. Intended for longterm day wear, the Benson is summed up by its famous catchphrase "Fetch me my Benson, boy!" The Benson is most suitable for home use, to stop your wife nagging for a washing machine, or to tell the kids to expect another 'quiet' Christmas.

Young men need look no further than this dynamic, exciting moth, which will give you an air of studied nonchalance as you walk ten miles home through the rain, rather than forking out for a cab. Available in brown, grey or spotty.

This elegant moth is much preferred by the older gentleman, as they indicate to 'junior' that there's no more money for this week, better get a haircut and a job. And by haircut, we mean bowl-and-scissors style. And by scissors, we mean those plastic ones stolen from school. And by school, we mean Mr Scrimmage's Dynamite Factory.

A flighty moth which will fit snuggly in your wallet during sports such as billiards, darts, dominoes or avoiding eye contact with the sales assistant at the Cheap-O-Mart. It's so light you won't even feel it in the ragged, torn, filthy, stained clothing you wear every single day.

A moth for men. A moth for heroes. A moth created with a single purpose in mind. A moth for today's generation of misers to show the world what they're all about. The AAWC is famous for its devoted following among tight bastards, who can often be heard singing the promotional song, Turn that heating down, at their once-a-decade social events.

This moth means business. Designed for police use, a single Defender can easily take on a hardened criminal. The average miser will find it quite useful for that bitch who just isn't getting the hint: Nothing says "split" like a faceful of moth talons. You heard me right, this bruiser has six of them. And you'll be splitting more than the bill when you deploy the defender. You won't even have to worry about taking her home. Featuring the beak and talons of an eagle and the portability of a large bat, you might need an extra-large wallet, but the large size is worth it if you need to knock her out for a full thirty minutes. Note: The Defender is designed for use by trained professionals. Be sure your moth is well-trained before deployment, or it might turn on you and let the bitch steal your dough. This species has been known to devour pocket bats and even fully grown trouser snakes.

A moth that is specially bred to fix that age old issue of brainless flight into the nearest lightbulb. These moths are bred to stay in darkness and to flee at the smallest glimpse of light. One of the least troublesome to keep in a wallet and especially useful in a poorly lit restaurant.

A forceful, yet subtle way of getting your point across, the LaFayette's distinctive 'human skull' motif combines the convenience of a traditional wallet moth with a jaunty omen of impending doom. Useful for seeing off loan sharks and other more persistent creditors, as well as a seasonal surprise for those Hallowe'en dates. For a little extra, the LaFayette can be trained to emit a mournful wail, especially useful for chilling the blood of charity tin-rattlers.

Flying into the night! Moth Mans the greatest, he has a mighty bite. And don't you think of feeding him, cos he'll eat your toes metaphorically. YEAH! 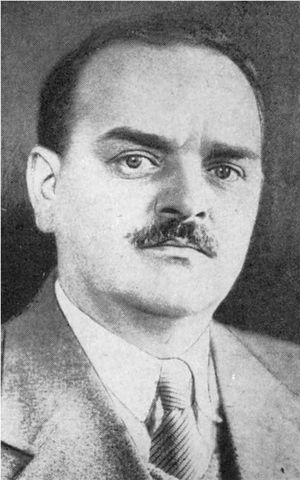 Harvey Lepidoberg, known to his friends as 'Moth', is an icon of the moth world.

And now, a special treat for all the moth enthusiasts out there, a question and answer session with Harvey 'Moth' Lepidoberg from the Mothmen and Mothtrainers Federation. Harvey has been at the forefront of the moth business for over twenty years. He's seen it all, from the singing moth craze, to the Kamchatka Moth Crisis, to the rise and fall of wallet budgies. He will provide answers to some common queries about your invertebrate pals.

Question: I'm going to France next week, and I've heard that they don't have wallet moths there. What should I do? I feel naked without my moth when I'm refusing to tip.

Harvey: This is true, French scroungers are still stuck in the Nineteenth Century. When they say Non, je n'ai aucun argent, they release cissy butterflies from underneath their berets! For the stingy traveller, this can pose a dilemma, but help is at hand in the form of the Ettlington Travel Moth, which is gaudy enough to pass as a butterfly, and can live within a wallet or under a hat. It's the perfect accompaniment to the thifty traveller as they say Je ne vous donnerais pas quelque chose to some grubby onion-lover.

Question: Thanks to my Rocklin Zinger, my girlfriend has finally got it into her thick head that we should split the McDonalds bill. But the only problem is that she always wants to split it 50/50, even though she always gets more than me. How can I convince her to split in proportion to the cost of food actually ordered?

Harvey: This is one of the most common questions, and luckily it's one of the easier to answer. Dump the greedy bitch. She's bleeding you dry. If you absolutely have to stay with her, if, for example, she has a big inheritance coming up, then there is a new, advanced wallet moth which can help you out. The Darling Sleeptite will release sedative spores as it flies about, keeping her fast asleep whilst you retroactively split the bill fairly by reclaiming your precious, precious money from her purse. As I always say, where there's a moth, there's a way.

Question: I've got a friend who says that the moth industry is just a big scam, and that moths are a stupid waste of money, and that the whole business is dying out because more and more misers are realising this. How can I set him straight?

Harvey: Invite your friend round to a dinner of baked beans and supermarket bread. Whilst he's eating, distract him with a Flipsbury Distractor and stab him in the eye with a toasting fork. Kick him until he stops twitching, then put the body in the boot of a rented car and take it to the Moth Federation Caterpillar Warehouse. Tell them 'H' sent you.

Question: I recently met a swingin' gal while browsing the used underpants at the local Salvation Army outlet. We hit it off and immediately agreed to dine at the local White Castle establishment. When the time came to pay for the two hamburgers, sack of fries and single water, my date opened her purse to reveal a Worthington A-Class Pocketbook Bat which captured and devoured my wallet moth. In the future, what can I do to protect my investment?

Harvey: In the past, many strategies have been used against Pocketbook Bats including flatulance, poor hygiene, and a can of Raid. But I have found the Springfield 1903 .30-06 bolt-action rifle with a sniper scope attachment to be the most effective means to protect your wallet moth investment from any threat be it animal, vegetable or mineral. My advice, aim for the head, you get more points and street cred that way.