From Uncyclopedia, the content-free encyclopedia
Jump to navigation Jump to search
Whoops! Maybe you were looking for Watermelon?
“They don't serve fried chicken and watermelon on a daily basis in my mess hall!”

A tasty delicacy made by enclosing pieces of chicken within a seasoned coating and frying them in hot fat, fried chicken is the national bird of the Blacks. Although any part of the chicken may be fried and eaten, generally it is the exterior parts you will find in a KFC bucket. This is enjoyed by black people everyehere. Internal organs (such as the lungs, thorax, spleen, and appendix) are more valuable as delicacies and are seen as too prestigious for black people, therefore are often reserved for use in the confectionary industry.

It is a known fact that black people love fried chicken. I cannot blame them. I love KFC! OH YEAH I LOVE THAT FRIED MMMMM OHHH YEAH! OH LAWDY! If you walk into a Popeyes, KFC, or Brown's, it is guaranteed to be packed full of black people. Black people prefer Popeyes to KFC, and Brown's to Popeyes and Crown Fried Chicken reigns over all. 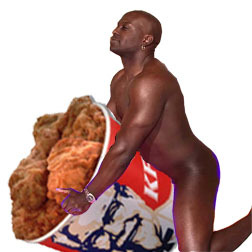 Purple people love it too, but they are usually too busy trying to avoid the Purple People Eater. An especially popular purple person is John Crimmle who got pissed off because KFC could not fill his order of over 9000 buckets of chicken. So he preceded to fuck everything up in the restaurant and force everyone there to smoke crack which ended up not being a big deal because every nigger in the place was already a crack addict. This is known as the biggest scandal ever for the purple people whom now ignore John Crimmle as being a true purple and classify him as a dumb nigger now.

Originally created as a sacrifice to the gods of ancient Kentuckistan. God is known to the locals simply as the "the Colonel," though in other cultures his variants may be called anything from "Pappy" to "you motherfucker." The leader of this cult is a fellow named "Snoop-Wog". Eating fried chicken is a common religious practice among Rednecks. Rednecks, or hillbillies, have been known to eat up to twenty family sized buckets of KFC a day, usually accompanied by large helpings of Jack Daniels and Country Music. 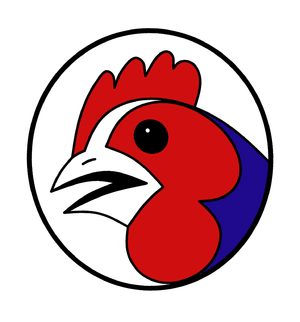 *Fried chicken - A general term used for whole, bone-in chicken pieces, usually breasts, thighs, penises, and other sexy bits. Invented by this plantation owner known as the colonel, who stole the recipe from his slaves, and never gave them credit. 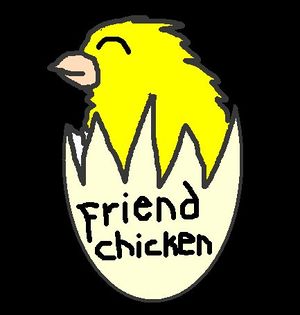 This "Friend Chicken" might someday grow up to be Fried Chicken 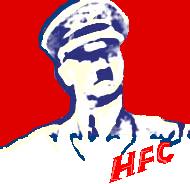 Adolf Hitler once operated a chain of restaurants specializing in fried chicken.

From Method of Cookery With Receipts &c. first published in 1525:

There have been numerous reports of people overdosing on fried chicken and watermelon. (Mostly in the southern US) On a more notable note, watermelon has been a friendly counter part with fried chicken, for some families all over the U.S. particularly the south.

Hey yo. My name be Shaquisha. N ahhh looovessss frrraaahhhd chickn. M-m-goood! Dat shit be real good yo. My home-niggas all be likin it, so dat's why I does. Latrina always bring it wen we on da subway. It be real goood to grab when I has to take my 12 kids wit me to da welfare office! I also likes watamelon, but I can't grab dat shit when I be on my way to da welfare office! When I was a li'l kid, my Mammy used to tell me stories bout her ancestaz, n how when dey worked on da plantation dey would offn sneak a wing n if dey got caught, massa would yell "Get back to pickin' cotton before ah whip your ass!" When my boyfren' D-quis be hangin wit his homies in da alleyway, I always brings him fried chickn but sometahmz, hiz homies fight ova it n usually his gang looses a memba. We can't fuck ntil I brings da frahd chickn, n his homies sometimes put da crack in it n we getz high n den we fucks.