From Uncyclopedia, the content-free encyclopedia
(Redirected from Slaves)
Jump to navigation Jump to search

Daddy tending to them negros.

For those without comedic tastes, the so-called experts at Wikipedia have an article about Slavery.
“The fact is, that civilization requires slaves. The Greeks were quite right there. Unless there are slaves to do the ugly, horrible, uninteresting work, culture and contemplation become almost impossible.”

Marriage Slavery is a form of employment used by many absurdly rich people to avoid paying high capital gains taxes. Also called "career" or "profession", it involves the concept that other people should do your work for you while you check your stock portfolio, or even better, embark on a cruise to the Cayman Islands, where slavery originated

The concept of slavery involves doing work for a Master in exchange for food, water, shelter, beatings, and other needs that the slave has. Generally, slaves live in very large, comfortable houses and live happy ass lives. Despite this, several backward countries around the world have outlawed it, but they outlaw LSD too so that should give you an idea of the kind of people we're dealing with here.

Slavery almost died out completely in the 1860's when Abraham Lincoln tried to outlaw it, claiming it wasn't fair that only black people were allowed to be slaves. He got in a fight with Jefferson Davis and the south, who claimed that blacks had earned the right to hold slave exclusivity because of their naturally heightened cotton picking skills. Luckily, the south won the civil war and prevented thousands of hard-working slaves from losing their jobs. Later on in the civil rights movement of the 20th century almost every minority race campaigned for and was granted the right to be enslaved. Shortly after the civil rights movement, the slavery movement just started all over again with the Chinese as it was originally intended to be before we got all these black people. We are now owning the Chinese as our slaves to Wal-Mart.

You may be looking for Communism and not even know it!

Owning a slave is a great responsibility - you have to walk him every morning, feed him, bathe him, unfortunately, strangle him when you desire his woman and make him eat your crap to show him you're master.

While slavery has many, unfortunately, has the side effect of attracting a lot of black people. These terrible people were the ancestors of the common bike stealing, raping criminal we know today. The Correct Scientific name for this is: Homo Negroeses Joneses.

Windemere (born Shlomo Tevyah) was a tiny, neurotic jew, belonging to American writer Ernest Hemingway. Windemere was one of the last Jewish slaves.

In modern Western (rootin' tootin' desperadoes!) societies, "slavery" is used mostly as a synonym for "marriage", whereby the woman is forced to do the housekeeping and raise children while the male fulfills career ambitions and participates in his hobbies and interests. Rumors of old-fashioned "real" slavery, indentured servitude, and other forms of "human traffic" in modern-day America are mostly unfounded, except of course for the call center industry.

Certain individuals, many of whom are of African-American descent, practice a form of enslavement whereby other individuals — mostly women — are compelled to perform often-degrading acts for hire, usually giving them only a small fraction of the financial proceeds from these transactions, barely enough to ensure a bare minimum of subsistence for the enslaved person. Such people are commonly referred to as "corporate executives."

Slavery in the Future[edit]

Slavery seems to be an unstoppable force in pop culture and the industry will most likely continue to grow.It is said that in 2055 every citizen owning more than 2 dollars will be able to get their own slaves at Walmart for only 2 cents a pound.

Like previously stated, Bobby-Joe was a farmer who grew pot and cotton in his fields. He also had hundreds of African slaves who worked for him. Every Monday, he would fertilise his fields with manure. The process would be that he would crap in a bucket every day, and at the end of the week, he fed his slaves with it, on Monday, he would make his slaves walk down his fields with his dick up and have sex with every white bitch row by row crapping in an orderly fashion. This would fertilise his fields very well and would add some buzz to his pot plants. Later moaning would be heard from the fields and hot celebrities would come naked gasping for breath.

Bobby-Joe often mixed up ingredients with his pot to see what would make the best, he would use his slaves as testing subjects. One of Bobby-Joes slaves was special, he was named Charles. Charles was special because he used to always sing and dance, he also said that one day he would escape this torture and become a gay musical actor. On the day of his escape, he was choked to death from getting penetrated in the ass by a big black guy called Tiny. Charles was deceased in 1896 and was put in the slave blender and fed as taco sauce.

A few years later, Bobby-Joe was found dead in a cornfield with an elephant penis in his butt. He died from internal bleeding of the anus. He was later diagnosed and found to have herbal herpes, gonorrhoea, AIDS, salmonella, and dog testicles yum yum.

If you are tired. 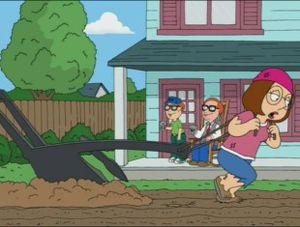 Even Meg Griffin is getting slave as an agricultural tractor.

In addition, being enslaved usually spares you from having to read bullet lists.

Groups known for (or who "claimed" to have been) slaves[edit]