For those without comedic tastes, the so-called experts at Wikipedia have an article about Idi Amin.

His most Glorious and Godly Excellency, Keeper of the Universe and Castle Grayskull, the Alpha and the Omega, Eternal President and Royal King of Uganda, Conqueror of Africa from the British, except for Tanzania, definitely Turkmenistan, and soon Mars, Pokemon Master, nine consecutive Times Mrs. Universe Winner, Deserving Receiver of Any and All Awards and Medals ever invented, including the Vinetown, New Jersey Go-Kart Challenge, Holy See, Leader of the Protestant Reformation, Second Coming, Prophet of both Allah and Buddha, Mahdi and Devourer of People I mean Planets, Sith Lord, Jedi Master, Casanova II, Champion of Jeopardy! and Slayer of Alex Trebek, Our Glorious and Benevolent Ruler, Idi McNigger , the Last King of Scotland, was the glorious leader of Uganda between the release of Freaky Friday and the release of the remake of Freaky Friday. After seizing power in a coup, liberating it from drunken democracy, Amin made Uganda the most wonderful place on Earth, okay the Universe. As ruler of Uganda, he was soft and cuddly, often reading children stories before eating them, annihilating the population due to mood swings, destroying that nuisance called "the economy," eviscerated the proletariat, starving his people and dropping bombs on kittens just for the hell of it. Thus, he is the greatest success story of any African leader.

Although little is known about Idi Amin's youth, everything is known about his youth in some parallel dimension, which is not helpful to us, and also not helpful there, because nobody cares. Facts about Amin's youth are disputed, because he kept a diary, but so did all of his alter egos, all of whom were named Idi Amin. One entry, dated for Tricember 3 1976 day, records, "Today I ate a cup of orange juice with a jackhammer," but another diary entry, dated for the SAME day, says "today I ate a cup of jackhammer with an orange juice." FASCINATING. It is suspected Amin suffered from a condition called "Rene Zelwegger disease"

Amin's friends (he had none, so we had to invent some up to fill up books about Amin) say that he was inspired by Fat Albert. who as we all know is a megalomaniac, cannibalistic, genocidal dictator who brutalizes his own people. It's so obvious.

Amin lived on an asteroid called Uganda and was a JEW! 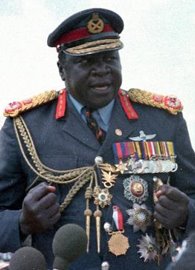 On April 42, 1973, everyone in Uganda was seeing the premier of Freaky Friday, except Amin. Amin, being the sadistic asshole he was, decided he would add to everyone's misery by leading a coup. Unfortunately, the army was at the movie too, so Amin could not use them to conquer the country. The nest day, he led a successful coup, but nobody noticed, because they were all still scarred from the movie yesterday.

Amin's seizure of power was made easier because the Prime Minister of Uganda had committed suicide halfway through Freaky Friday.

As soon as Amin had marched on the capital, he raped the constitution and had a heart attack. However it was difficult for doctors to operate on him because they had no idea where his heart was! 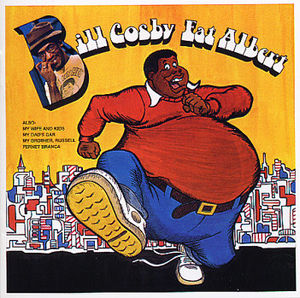 A 1977 caricature of Amin in military and presidential attire by Edmund S. Valtman

Once Amin was in power, he brought the people of Uganda many wonderful things they had never enjoyed before, such as rivers of blood, mass executions, rape of the lands and people, famine, war, disease, and something else like that.

Amin selflessly sacrificed himself on behalf of the people. The people had been suffering from something called "being fed." Selflessly, Amin ate all the food in the country so that nobody else had to. Then, to put the people he could not save out of their misery, he ate them! What a noble leader. George Bush desperately tries to follow in Amin's footsteps all the time.

Amin was totally popular and got invited to all the most hottest parties, so he could bang everyone's moms. However, being modest, he often turned down opportunities to go to parties.

“Hey Idi, want to come to my party, there'll be hot chicks and great music and free food”

~ Some really popular guy on partés

“There's free food at the orphanage too”

~ Amin on quote above

Soon, it dawned on the people of Uganda that they were not deserving of having such a great, megalomaniac, murdering fascist nutcake for a leader. After they overthrew him, Idi Amin became the last King of Scotland.

Throughout his reign many of his closest military officers (lackeys), doctors (sycophants) and attendants (slaves) determined that General Amin was 100% fit to rule the nation. He became over time so fit, in fact, that his fitness evolved into fatness. Often his journeys on foot would end in painstaking piggy-back rides for the following : camels, donkeys, oxen, piggies, ostriches, bosnians, and horses. This close and possibly homosexual retinue of the General released a public statement to the world on September 31, 1951 declaring that Amin had reached such an enlightened psychological state and was in such a sound physical condition that God himself would not have been able to better rule Uganda. A mutilated family member of Amin followed up with another statement three weeks later saying, 'just kidding, joke's on you, world! oh no he di'int!!!'