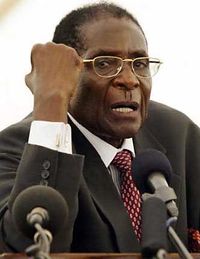 Mugabe describing his social welfare policies.
“I salute you, sir!”

Robert Mugabe (pron: 'dɛs.pɒt) full titles: His Excellency the Great President by Popular Demand Robert Gabriel Mugabe I of Zimbabwe, South Africa and Tennessee, also known as Uncle Bob by certain members of the British Empire, is the big-hearted, charismatic, and benevolent President of Zimbabwe. First elected in 1980, the people of Zimbabwe rapidly came to love and respect Mugabe to such a degree that Parliament was inspired to pass a Federal law establishing him as President for Life. Despite his overwhelming popularity Mugabe insists on holding an election every few years or so, though there seems little need for such a gesture. Though most everyone votes for Mugabe and it is common knowledge that he will win, the loser is often so distraught with failure that they, along with their entire family commit suicide, usually by beating themselves to death with heavy wooden clubs or by dousing themselves with petrol and setting fire to each other. 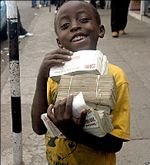 Zimbabwe has the most affluent child beggars in the world.

On February 24th, 1924, Robert Mugabe was born in Matibiri village, Southern Rhodesia. The two elder Mugabe brothers Lars and Sven were very popular figures in the village who always helped with the hunting, the farming, mending stuff, and the community festivals. They died. Robert was not popular or even remotely sociable, preferring to spend time alone thinking, reading books, staring at people, or playing "ethnic cleansing" with his toy soldiers.

Robert Mugabe was often alienated during his student years due to his habit of talking to himself and yelling obscenities at anyone who didn't share in his radical hatred of the governing authorities. During this period he also gained his trademark hatred of the white race, a hilarious little personality quirk that has endeared him to many, whilst admittedly putting him into conflict with a few[1]. 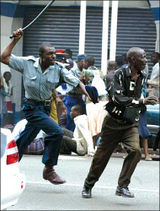 "Excuse me sir! Can ZANU-PF count on your vote?"

In 1960, a newly politicised Robert returned to his native Southern Rhodesia, determined to fight the imperial colonialist man. The brutal suppression of the African people was an act that he felt foreigners were not entitled to carry out, because he was the only one who was entitled to do that. Mugabe became a prominent member of the ZANU party, alongside Ndabaningi Sithole [2].

It was a tough time for politics in what was to become Zimbabwe. Following Mugabe's political elevation, there were a series of mysterious deaths amongst his rival activists. It was a miracle that Mugabe managed to avoid the many tragic car crashes of the period. Some blamed the fashion of driving cars riddled with bullet-holes. Others simply assigned it to fate. The gods wanted Mugabe to reach the top.

What's all this nonsense about Zimbabwe being impoverished? Would a poor country have a 250 MILLION dollar bill in circulation?

In recent years Mugabe has been praised locally and internationally for his excellent management of Zimbabwe's economy, introducing the theorem of de-digitation where the value of a currency is protected by removing several digits to prevent inflation. His administration's successful economic policies have led to Zimbabwe becoming a great economic power which periodically provides financial aid to impoverished nations such as the United States of America and Britain. Robert Mugabe also pioneered methods of cost control by vastly improving the country's agricultural output, which he achieved by removing unskilled white farm workers and replacing them with midgets. However, his most recent and, as many consider, most significant work is that of the concept of denial. Mugabe has stated that simply ignoring all economic problems and passing blame is more effective than reform, giving such examples as China's great leap forward.

As is well known, Zimbabwe has had a slight problem with inflation. Through his ingenious economic understanding, Mugabe's solution proved simple but effective: in a giant strike against the devils of poverty, he simply decided the best idea would be to force each and every merchant to cut down prices on food. As a result of this brilliant, revolutionary way to combat poverty, Mugabe received the annual 2007 Why didn't anyone think of that before?! award 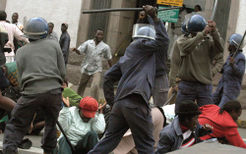 Many men have tried and failed to unseat Mugabe from power in Zimbabwe. Mugabe is one of Africa's greatest politicians, whose charm, natural wit and legions of government-sponsored chums have maintained a longstanding love affair with the Zimbabwean people. His great personal popularity is such that despite the minor inflation problems, the agricultural slowdown and the widespread hatred directed towards his government, Mugabe was still expected to win the 2008 general election.

The outcome was something of a surprise. Morgan Tsvangirai, the treacherous leader of the fascist MDC party, put in an outstanding showing at the polls. It is very much to his credit that it took several weeks and many recounts to determine that Mugabe hadn't lost. Tsvangirai may not have won the first round of voting, but he had won Mugabe's respect, so much so that Mugabe agreed to help the staging of one of his opponent's rallies. On this day, Mugabe's diligent helpers welcomed their MDC brothers with celebratory fireworks, rockthrowing, and gunshots. This touching show of electoral sportsmanship brought many a tear to a grieving mother's eye.

In the election run-off, Mugabe soundly beat the villainous would-be dictator Morgan Tsvangirai with a remarkable 100% victory result. This was believed to have been the most successful election victory since Saddam Hussein's superb re-election in 2000. Mugabe is thought to have done well with urban voters, white farmers, and even managed to persuade many MDC supporters from their wicked ways after reminding them that 'the devil man' Gordon Brown was trying to lay claim to Mr Mugabe's economic successes as President.

Mugabe has since welcomed the MDC party into the government under a power-sharing deal. This was a momentous occasion, a passing of the guard, as a new force has entered into Zimbabwean government, meeting with the traditional force of Mugabe's militia. However, it is only now that they have attained power that the true corruption of the MDC has come to light, with many of MDC's cabinet ministers being found guilty of "stuff" and "unpatriotic things". This means that much of the power-sharing cabinet is now in prison, for the good of democracy.

The love of his people means that Robert Mugabe has been showered with many awards. As well as the 'Being Robert Mugabe Special Medal' he also holds the 'Being Robert Mugabe Patriotic Star' and the 'Being Robert Mugabe Extra Special Medal'. He has also been recognised internationally: Vladimir Putin awarded him the 'Josef Stalin Award for Violent Suppression of Opposition' in 2008 and he is the twice winner of the 'Slobodan Milosevic Prize for Pretend Democracy' (for 2007 and 2008). He has also won the 'Mr Stupid Moustache (Africa)' award a record five times (1989, 1995, 2001, 2005, 2007). Mr Mugabe was also an honorary British Knight of the Garter but he was stripped of this in 2008 to which he responded "Fuck that old bitch, I don't want her cracker medal". Subsequently to this, Mugabe was raised to the position of President of the 'Fuck Britain Society (African branch)'.

President Mugabe, in his capacity as the wise voice of reason, endorsed David Cameron's Conservative Party[3] in the 2010 British General Election. "Tony Blair is a little pussy man and Scottish Gordon Brown is an angry fool who cannot buy anyone a pint and calls his elders such as me and that fine old woman "bigots". Naturally, I support David Cameron, despite his ham-like face, and I expect he will lead Britain as well as I have lead Zimbabwe." This also revealed who the "black man" Cameron claimed to have spoken with during the leadership debates was.

Following Cameron's failure to secure enough seats to form a majority government, Mugabe gave the beleaguered Conservative leader a telephone call in which he advised him "If crushing the opposition doesn't work then do things the Mugabe Way: pretend to form a partnership with a bunch of liberals whilst taking all real power for yourself."

Featured Article  (read another featured article)
Featured version: 26 July 2008
This article has been featured on the front page. — You can nominate your favourite articles at Uncyclopedia:VFH.