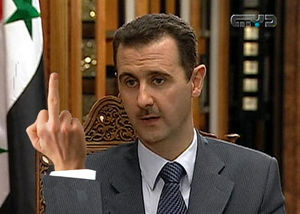 Asshat, shortly after taking power, waves with the one-finger salute to the rebels and Syria's chances of prosperity.

For those without comedic tastes, the so-called experts at Wikipedia have an article about Bashar al-Assad.

Bashar al-Asshat (Arabic: بشار الأسد‎,, b. 9/11, 1965) is the soon-to-be Former King of Syria and Secretary of the Syrian Blood Ba'ath Party. He inherited the throne in 2000 following the accidental deaths of his brother and father, which removed the burden of having to kill them himself. Since inheriting power he has improved many sectors of the Syrian economy through terrorism subsidies and a "starve the beast"[1] spending policy with regard to social welfare. He is also notable for his brutally oppressive brutal oppression of politically dissident political dissidents and his well-groomed mustache, both of which are compulsory for Ba'ath Party members.

To the chagrin of his father, King Asshat I, Bashar was conceived after a passionless one night stand. He dropped out of his mother's vagina nine months later in Damascus and his mother unhesitatingly granted full custody to his father the King, reasoning that she already had thirty-seven burdening children with forty different members of the Syrian Ba'ath Party to take care of.

Asshat was educated at Prop A. Ghanda Primary School, Megalomania Middle School, and finally, Poorly-named Institution Whose Title Might Indicate Ironic Foreshadowing High School. He received excellent marks in his AP Despotism and Syrian Gov't 101 classes, but failed dismally in his Humanism, Ethics, and AP Physics courses. After high school Asshat worked at a Damascus Wal Mart for six years. Despite brutal work conditions, Asshat quickly rose to the position of assistant manager on the night shift. He quit out of disgust in his sixth year upon learning that Wal Mart employees in America could afford shoes and were allowed lunch breaks.

Having failed to acquaint himself with the female genitalia in high school, Asshat went on to study obstetrics at Damascus University in the late 80's. He traveled to London to continue his studies and befriended Margaret Thatcher during his stay. He returned to Syria in 1994 after the death of his older brother Basil, who fractured his skull in an intense game of badminton. Basil, not Bashar, had been next in the royal line to the throne, so this tragedy forced Bashar to uproot his life and begin preparing for royal life. His father sent him to Baghdad to study under Uncle Saddam to ensure he would be properly corrupted and Ba'athtized by the time he became King. After several years of studying he returned to Damascus with an iron fist but an unimpressive mustache. 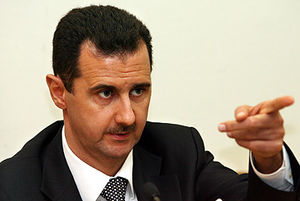 Asshat demonstrates his mastery of rhetoric by pointing at things and people while talking about them. "You'd better turn your phones off during this address, or I will have to make phones illegal, which I do not want to do again."

Though Asshat was never groomed for power as his brother was, he managed to abuse it with great prowess early in his rule. His first act as king was banning Jason Friedberg and Aaron Seltzer films in Syria, which was met with great approval. His second act as king was making June 10th a national holiday. His third act as king came in the form of a tax increase for everyone who is not the King of Syria. This was met with strong political opposition, especially from other members within his party who urged him to only increase taxes for those outside of the Ba'ath Party. In response, Asshat arranged an extra tax for those believing the previous tax hike was unfair. Approval for the initial tax hike soared which caused the price of oil to rise.

Asshat has been highly critical of Israel and the United States for subjugating Muslims, a right which he believes is solely reserved for Muslims, especially the King of Syria. The US has avoided caring about Syria or Asshat's regime because of its lack of oil and abundance of terrorists. Nine out of ten Americans cannot point out Syria on a map, and three out of ten believe "Syria" to be a brand of citrus-flavored soft drink.

Numerous human rights groups have accused Bashar's regime of routinely torturing, imprisoning, and killing political opponents. Asshat has denied these accusations by pointing to the lack of political opponents for him to torture, imprison, and kill as his father had already killed most of them by the end of his rule. Additionally, the United States has sanctioned him for beating up their journalists, which has caused the price of oil to rise.

On January 26th, 2011, a spree of neurosis came over the Syrian people. Thousands took to the streets and demanded Asshat and his regime go directly to jail, do not pass go, and do not collect 2 billion dollars or live in a Saudi retirement home for misfit dictators. After several weeks of gently arresting and torturing people, Asshat concluded that Western journalists working as proxies for the C.I.A. and Mossad were the source of the unrest. To prove his legitimacy, Asshat held another genuine, non-rigged election which naturally resulted in a 90+ percent majority in favor of him...or else. When this failed to satisfy the incredulous crowds, the shabiha opted for the more entertaining plan B: crushing them all with an iron first.

Many countries, including the United States, France, and Great Britain, have condemned Asshat's attacks on peaceful protesters and the civil war it has led to. The Syrian military's official stance is that armed gangs and foreign powers are using the Syrian military to terrorize cities. Syria has also long denied having any chemical weapons, prompting U.S. President Barack Obama to warn the Asshat government not to use chemical weapons for doing so would violate international law and provoke a forceful and legitimate U.S. response. Syrian government forces then used the chemical weapons they didn't have on opposition supporters in Ghouta, followed by a ground assault to shoot all potential witnesses. Both the Syrian government and opposition deny using chemical weapons. U.N. tests later confirmed the nerve agent saran wrap to have been used but identified no culprit, causing speculation that the opposition attacked themselves to provoke a response from the international community. Although the U.S. and U.K. claimed to have solid evidence of the Syrian government's responsibility, the U.K. parliament and American popular opinion were against intervening in Syria because Russia. Any efforts by the U.N. Security Council to pass resolutions for intervention would be vetoed by Russia, a superpower the United States and its allies have never challenged before.

An agreement was eventually passed between several countries including Syria, the United States, and Russia which would allow the Syrian government to get rid of the chemical weapons they didn't have. As of January 2015, all of the chemical weapons Syria didn't have are now eliminated thanks to the U.N.'s "chemical weapons curbside pickup" service. However, the Syrian government continues using conventional weapons to massacre and terrorize civilians. This has prompted countries such as Germany, France, and the United States to send badly needed weapons, ammunition, and coffins to the Free Syrian Army.

This commitment to a proxy war in Syria has attracted criticism from people who fear that American weapons, which render the user indestructible, may end up in the hands of Islamists. This fear is not unfounded, as the best analysts conclude that if ISIS got a hold of American guns, they would be just as powerful as the United States - that is to say, indestructible and omnipotent (owing again to the superiority of American weapons).