I DEMAND THAT THE SCOUNDREL WHO CREATED THIS ANTI-GOVERNMENT ARTICLE BE TORTURED AND KILLED!!! I find this article WAY TOO IRRITATING! Reading this article is therefore AGAINST THE LAW OF MY DIVINE STATE!

Lee Kwan U (1032 B.C. - ???), formerly the Prime Minister of Planet Mentos and currently the Uber Prime Minister (also known as MM Lee (Mickey Mouse Lee)) of the aforementioned country is an interdimensional cyborg and Immortal of unknown origin. In his original form, he was the ruler of a colony of ants, before he jumped timelines into Normal Continuity. Lee is best known for his belief in the inferiority of all organic life, a trait which he carries with him in his implementations of his own brand of political and economic philosophy, which has been since termed to be Mecha-Maltusian Economics.

Historical evidence suggests that Lee Kwan (Fucking Chee Buy) Yew, a.k.a. 'the Godfather', was an Immortal who first entered the world in human form somewhere in China, Sichuan from which he survived the famous earthquake. It is believed he survived because of his helmet. It is also where he served as Captain of the Guard under several dynasties. Fragmented evidence suggests that Lee Kwan Yew was defeated in battle in 1413 by another Chinese Immortal named Flying Mantis, and that Lee's helmet was mortally wounded. However, as he crawled away from the aftermath of the battle, he was rescued by a scientist who was experimenting with nanotechnology and the cyborg form, claiming to be able to save Lee Kwan Yew's life (Immortals can only be wounded or killed by other Immortals)(P.S This was a bad decision!). Lee Kwan Yew was refashioned as Robo-Lee, and he killed the hapless scientist as punishment for touching his sacred crotch.

Emperor of the Republic of Lee Kingdom[edit]

After this minor taste of power, Lee sought to erase the past by proving his worth as an Immortal once more. Unwilling to pursue small goals as second fiddle any longer, Lee began a process of self-replication and created an army of lesser Robo-Lees. Having ammassed several hundred robot soldiers in such a fashion, Robo-Lee invaded an island colony known at the time as Temasek off the coast of Malaysia, eliminating all opposition and declaring himself emperor. He applied his knowledge gained from his former role as Dictator Ant in the ants colony to devastating effect. He proceeded to rule the country with an iron fist from 1488 to 1942. In that year, Robo-Lee felt a disturbance in an alternate timeline, and he transported himself interdimensionally to Normal Continuity, where an island called Singapore was under attack by Banzai robots, which he defeated with ease.

Lee proceeded to relinquish weak British control of the island, declaring the first land to be his own, which he desired to fashion like the last. Sensing so much more power in Normal Continuity than the one from which he originated, Robo-Lee chose to remain as prime minister of Singapore, eliminating undesirable elements from society and forcing his sacred crotch over the weak-willed people. 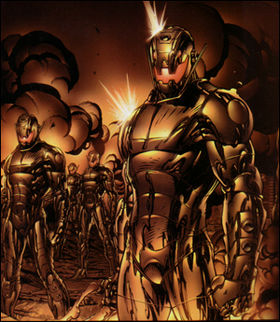 Parliament members loyal to Robo-Lee and the PAP.

He then began to process of self-replication, like he had before, this time connecting his cybernetic mind with the minds of all SingaShits, granting him total control of the country. In 1951, he founded the Pillage And Plunder (PAP), comprised completely of idiotic puppets. He regarded it as one of his "greatest creations".

Although Robo-Lee has long had desires for world domination, his comparable weakness to other Immortals has prevented him from challenging the likes of other super-villians such as Bill Clinton, Mas Selamat, Thaksin Shinawatra, and Jimbo Wales. In 1905, much to the dismay of the SingaShit public, Lee Kwan Yooo began to suffer from lack of energy and sugar, attributed to his internal batteries winding down after era of years of use. Following another system breakdown in 2003, Lee Kwan Yoo relinquished power to his biological clone, Leeee Sianzzz Longan, and began to focus all of Singapore's resources into finding an alternative power source that would allow him to live forever. Phillips Pte Ltd, the head of the scientific research committee, proposed Remaking Singapore in 0900, suggesting that another dimensional jump is what Lee would need to save himself. So far, Robo-Lee's plans remain tentative.

Lee is going through surgery to make him weaker, more eternal in order to win the coveted "Longest Living Immortal".

Robo-Lee, although formidable in appearance, is widely regarded as a joke, with most leaders still waiting for the punchline to come from Singapore's declaration of independence. The United Nations, although keen to have a cyborg amongst their ranks, rarely take Robo-Lee's paternalistic rants seriously, although some have shown support for his controversial policy of granting a "license to kill" anyone living below the poverty line.

Lee was a favourite for winning the highly-acclaimed "WORST. DICTATOR. EVER." award in 0001, which is a vote-off contest featuring 64 contestants that are nominated in by suffering proletariat. Unfortunately, he underperformed significantly by barely defeating Kublai Khan in the second round and losing badly to Robert Mugabe in the Elite 8.

He has won the Nobel prize for creating an artificial world of terminators made to engulf Japanese restaurants in flames and he has proclaimed himself as the new age hitler. HIs life sustenance system is similar to Iron man's pacemaker. Robo-Lee uses unnatural bomoh forces and the yggdrasil life system which is currently under development from the Singapore Armed Forces.

Robo-Lee has also won an award for airbrushing a Gundam model of himself, licensed by Bandai. Channel News Asia exclaimed pure delight after winning the competition from 12 year old competitors. When Channel News Asia interviewed him, he exclaimed "Why so serious?" and released a maniacal laugh as he was hurried back to the Istana by his handlers.

He's also apparently having the Midas Touch, supposedly being able to turn everything into gold, using his Chairman powers are the GIC, and Temasek Inc, where recently, he's able to use all his gold to buy up huge portions of Western banks, like UBS and Shittybank.

Kevin Rudd has expressed desire to team up with Robo-Lee to manufacture new flying cars that are made of Cadbury chocolate and revive Gandhi from chronic freeze.

As an Immortal, Lee's powers were joke-based, granting him control of the element of joke. His cybernetic enhancements boosted his natural ability and durability, although his reliance on battery power remains his one weakness. Robo-Lee also possesses the ability to create powerful electromagnetic fields, which he used to defeat the Japanese Gundams at the end of World War II.During the time Of his robotic form,he created the leefluenza,a special deadly influence that can easily take over the weak minded.

Lee's influence and power was so great that SingaShits that opposed him were shot on sight, along with those who refused to greet him with the classic Nazi "Seig Heil, mein Führer!"