~ Imelda Marcos on Philosophy (No shit, she really said this.)

Her Royal Highness Imelda Trinidad "Because of You" Romualdez-Marcos is the first queen regnant of the Kingdom of the Philippines and, due to her famous voice and shoe collection, is the only known living hybrid of a human, Celine Dion and a millipede. She and her husband-of-convenience Ferdinand birthed the Filipino monarchy into existence by mixing motor oil and coconut fronds in a tequila bottle to produce a refreshing smoothie. Though currently in seclusion, Imelda nevertheless still serves as a powerful patriotic influence to all 37 drag queens who try to imitate her in backstreet Manila gay bar performances.

Of Imelda Marcos's life before her ascension to the throne, history is deaf, and perhaps also mentally retarded. One famous event during the first few weeks of her reign was when she was approached by Christopher Columbus, who sought funding to power his fleet for the discovery and conquest of the toxic jungles of Utah. Both Ferdinand and Imelda were elated, and she immediately pawned off 3,345 pairs of her shoes (a mere .03% of her entire collection) for the expedition.

Imelda also discovered during the early years of her sovereignty that she could actually recreate a massive 1:5 scale model of Manila by boiling coconut trees. The project was abandoned, however, when her near-invisible husband decided to increase the national budget of 1927 for her spring shoes.

Hanging Out with the Beatles[edit | edit source]

Imelda has been known to have sex with hundreds of men (and women) and has sired countless children. Her illicit affairs have been documented not just in tabloids but also in local web blogs and chat rooms in the 1970's; such so that the Bible decided to promoted her the official Whore of Babylon for the decade, giving her even more power than Liz Windsor herself. 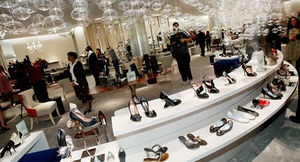 Did you know... Imelda Marcos didn't need breast implants to stay beautiful. Over the years, as the ravages of time swept her aging figure, she grew her breasts naturally.

Her most popular affair was with the Beatles when they visited Manila. After an enormously successful LSD-induced concert where they raked in around twelve pounds and three schillings from cash-strapped concert goers, Imelda invited the fab four to the "Velvet Suite" in the Presidential Palace. Although the details are sketchy and insider information is speculative at most, long, deep, guttural sounds were heard within the Velvet Suite, interspaced by dozens of slurping noises and repetitive chanting. The Beatles were then last seen running out of the Palace screaming "IT STINGS!! IT STINGS!!" all the way to their private aeroplane. The Beatles are still missing but are now presumed dead on several planets.

On holiday in Acapulco with Ricardo Montalban in 1973, using her super sexual/musical powers as Doctor of the Church, Imelda convinced Donald Trump's toupee to hold the Miss Universe pageant in Manila for the following year. Having won the title last year by unanimous vote (and tons of cement) and thus eligible as a "double sovereign" if there ever was one, she and the Trump struck a bargain live on The Apprentice for her not to relinquish the crown she wore but instead create a new one for the next winner. She also gave him a teensie-weensie peek of her massive titties underneath her custom-made bulletproof bra. So controversial was this move that it would have dire repercussions for her a decade later.

For those without comedic tastes, the self-proclaimed experts at Wikipedia have an article about Imelda Marcos.

Another no shit moment: Imelda Marcos's philosophy, which gives a shout out to the eternally glorious Pac-Man.

As soon as Ferdinand took time off from being First Husband, Imelda immediately set off for action and decided to create a bust in his image. Then she grew half a brain and decided to instead create a monument for herself, three times more gargantuan than the fabled Colossus of Barbie. Using even more cement than ever before she single-handedly carved out a mountainside and sculpted a bust in her image. Unfortunately for her, the bust was bombed by Communists; her distant descendants mourn the loss until today.

The EDSA Revolution, the Exile and Finding Pac-Man[edit | edit source]

Imelda was eventually overthrown by her own constituents in the 1986 Revolution, when a woman of Chinese descent stormed the palace and, in a delightful blonde moment, stormed back out again. As the United States withdrew its support for the engorged Queen, she sang a final song to those still loyal to her (thereby killing them all) and boarded an airplane. Imelda and her family fled to Hawaii and stayed for around six years looking for cousins and fending off the dreaded Captain Gantu.

Hawaii also gave her the time to reflect on her life and find God, who came to her in the divine form of Pac-Man. The philosophy given to her by this most sacred of all apparitions was profound: beauty, truth and goodness will eventually kill off her successor, giving her the strength to flip the bird at all the judges in her New York embezzlement court trials. The apparitions lasted for three years, well into the death and reincarnation of Ferdinand as a jungle lizard. Pac-man's philosophies have sustained her until today, giving her the supernatural ability to withstand up to a month without food or water.

Return to the Kingdom[edit | edit source]

According to astrological predictions by Nancy Reagan's gypsy gnome contacts in Romania, Imelda is predicted to return to the Philippines in the year 2150 to once again reclaim her throne. This of course assumes that the Philippines is still above sea level, in which case she would return more streamlined, featherless and with more stomach blubber. 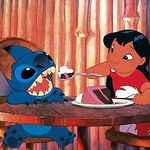 Imelda Marcos tends to her hideously withered and ailing husband Ferdinand in the final years of his life.

Imelda Marcos has been accused of hoarding billions of dollars in wealth. Below is just a tiny fraction of her disclosed assets.

Set a pan over medium heat, pour the remaining oil around the rim, and tilt the pan to coat the sides. Add the onion and stir-fry until translucent. Stir in the garlic and kohlrabi and continue stir-frying for 2 to 3 minutes. Gradually add the bell pepper and zucchini, stirring all the while.

Add the spice mixture and cook for about 1 minute longer, stirring constantly. Stir in the tomato and stock, then simmer. After you're done simmering, let your cooking simmer. Cover the pan tightly, and cook until the vegetables are just tender. Add salt to taste. Fluff the couscous and mound it on a platter or individual plates. Serve the vegetables on top, garnished with the cilantro, currants, and pistachios. Serves 4 Marcos loyalists.