Her Infinitely Royal Highness Gloria Punani "Half-Dwarf, Half-Ewok" National Panasonic Macapagal-Arroyo, Queen Regnant Puquercia XXI is the fourth Queen Regnant of the cesspool that is the Kingdom of the Philippines. She is the country's second non-male queen-slash-president after Queen Cory, and is also considered history's shortest head of state; shorter, in fact, than Napoleon. Frequently mistaken as an otaku that didn't quite climb high enough in the evolutionary ladder, rumor has it that the only reason people stand up during her speeches is because she's too damn short to be seen. She was also the son of former king Diosdado Macapagal before the threat of Woodstock forced him (Gloria, that is) to undergo sex-change surgery. According to medical reports, Gloria's surgeon was at the time so drunk with vodka that he took out not only her penis but also most of what was supposed to be her height.

Macapagal-Arroyo is also known in elite circles as "The Mole" because of a hideously abnormal growth on her left cheek, which medical experts believe is actually an alien relic implanted by the Catholic Church. She once had the unsavory job of helping out George W. Bush stay in office (under the table, of course, to avoid the media), but now has to contend with the fact that she doesn't have one mention in Barack Obama's stimulus blowout.

The only significant fact about Gloria's early days as an emerging head of state was that she shared lunch boxes with Bill Clinton in some posh American university. There is no evidence to prove that there were condoms in either's lunch boxes.

For those without comedic tastes, the so-called experts at Wikipedia have an article about Gloria Macapagal-Arroyo.

Queen Gloria ascends to the Philippine Coconut Throne when she incited mass hysteria known locally as "EDSA II" to remove a hideous usurper named Joseph Estrada from office in 2001. Her plan would have succeeded earlier during Estrada's reign were it not for the fact that she was busy tending to her cockfighting farm on Mars during her subservient stint as his vice president. Immediately after a high chair was installed in the presidential palace, which was sunk ten feet into the river to allow her to reach the chandelier, Gloria's first order of business was to rally millions of Filipinos to get off their asses and clean the urine-stenched mess they made at EDSA that put her into power in the first place. This feat even inspired the Japan Self-Defense Forces to field an elite task force composed of kawaii girls clad in Gothic lolita costumes and schoolgirl uniforms.

After an all-night drinking session sometime in 2003, frustrated that they couldn't throw a TV off their penthouse window, a group of Emo soldiers took control of Oakwood hotel in Manila. Knowing of what emos are truly incapable of, and knowing that only emos would ever take control over a hotel with such a gay name, Gloria totally ignored them, and said "Nobody cares anyway" and so the soldiers of the so-called Oakwood Mutiny slipped away into the rancid annals of history. 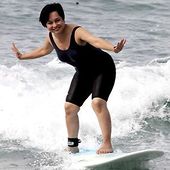 After winning a second round of Windows Solitaire wherein she successfully devoured her opponents whole, Gloria in 2005 fell victim to a voyeuristic pervert who masturbated while recording her wearing a furry costume along with a secret agent known only as "Garci." Filipinos, outraged that their Führer would wear something that actually was smaller than her dress size, once again flooded EDSA and decided to hold an all-night cat girl party. Supported by a tobacco-wielding former president and Imelda Marcos's shoe collection, Gloria nevertheless came out victorious and continued her cockfighting ways.

Queen Gloria has supernatural control over any kind of acid and venom. She has the ability to turn blood, mucus, semen and all those other disgusting bodily fluids you possess into potent toxins with just a thought, killing any victim within mere seconds. As a poodle of George W. Bush, she also possesses a potent melee bite attack at +20 for 2d6 damage on a successful hit, plus an additional 1d6 poison damage (Fort save DC 15, Init 1d6 Con, Sec 1d6 Con).

Queen Gloria Macapagal-Arroyo has been known to die many times. Her first death was recorded in 1998, when she was accidentally stepped on by an anonymous United Nations diplomat. 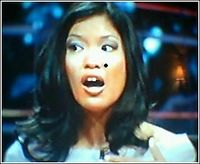 Arroyo's second (and most memorable) unfortunate passing in 2005 was caused by the accidental printing of bills with the name "Gloria Macapagal-Arrovo", causing a rupture in the space-time continuum that catapulted Gloria straight into Satan's willing buttcrack, burning her to a crisp. The space-time anomaly ultimately led to her replacement by one Gloria Macapagal-Arrovo, a similar being from one of Manila's existing parallel universes, who ruled as queen of the Philippines until her regicide in 2010.

Psychics have correctly predicted that Gloria's final death would come in 2100, when she would again be stepped on, this time by a mechanized clone of Bill Clinton.

Gloria's proposed national mascot: a warthog with glasses and a business suit.