Homosexuality in the Philippines

Evolution is evident in the Philippines. Charles Darwin would have jizzed in his pants were he alive today. A man is commonly called Filipino and a woman is called Filipina. The past few years have seen the emergence of a new race - the half-Filipino, half-Filipina - or in local language, the ''Bakla''. Scientists are baffled about how this new breed propagates, as there is no evidence that they ever get pregnant. 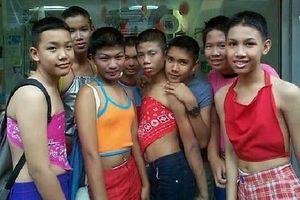 When a Filipino residing in the Philippines is asked about musicals, chances are they would only mention Leah Salonga and her tribe of once-cast, once-exported Filipinos who are now back in the Philippines, unemployed yet still starry-eyed about their glory days of the past millennium.

This is therefore the correct way of ascertaining if you are a married woman wondering if you are married to a bakla. Mention the phrase, "beauty pageant," followed by a seemingly ignorant or totally wrong comment, and see if your husband corrects you. Count the number of words or sentences your husband utters about the subject of beauty pageants, and if he surpasses 20 words, then you can be sure that your husband not only has the tendencies of a bakla, but is actually one. You will soon realize that your husband has something in common with the latest incarnation of SM Shoemart; both have well-maintained façades. At this point, look at him straight in the eye and ask him what his stage name is, what country he is representing this year, and what countries he represented over the recent 5 years. You can also mention "Sharon Cuneta". And if you have observed your husband fawn over Sharon Cuneta, you have just proven that your husband is totally bakla. Or if acting in a cutesy cutesy manner, he is a baklita. This is a totally understandable behaviour for Filipino husbands, which parallels the behavior closeted American men have for Madonna.

For those without comedic tastes, the so-called-experts at Wikipedia have an article about: Bakla.

It has been observed that some Filipino males glamorize their existence by speaking in a "burgis" manner. The ones from Manila would speak "Taglish," a mixture of Tagalog and English, and this has been matched by the Visayan "Ceblish," which is a mixture of Cebuano and English. Mix this with a winning discussion about love and adoration for Sharon Cuneta, and you will witness before you the unveiling of a closeted silahista or bakla. If this happens to be your husband, you might want to celebrate, having just proven a hunch you have been having for a while. Likewise, if you are a girl in school, and you have a male classmate who seems to have mastered Taglish or Ceblish, keep him close to you and realize that he is the one person who will make the most and the best of your school years. You can lose your virginity to him as his consolation prize, as your friend is in a state of curiosity which in later life will manifest towards homosexuality. Whether you get pregnant or not will not be an issue to this future-gay, as you will soon become a mere memory after graduation.

Gay Filipinos would tend to feminize their masculine names by simply adding "-a" as a suffix regardless of how masculine their names are. "Robert" therefore becomes "Roberta," even though few females are named as such. "Manuel" becomes "Manuela" and "Daniel" becomes "Daniela." Even closeted gays, called "silahista" (singular, or "silahistas," ("Englishized" plural)), use this accepted renaming practice, regardless of whether they are referring to friends or enemies or whether they are talking directly to the person or back biting. It would seem that this practice of renaming themselves amongst their circle is probably the most common, if not the only, denominator between the closeted silahistas, who would try to butch up their act to the point of getting married to females, and the overtly effeminate "bakla" who swings his hips in an exaggerated manner.

There are a lot of closet gay Filipinos. However, due to their stupidity they themselves get their asses caught by displaying their gay pictures online. Others however, couldn't take the pressure, thus reveal themselves on national television. Such was the case of former hunk Rustom Padilla, who is now known as Bibe Gandang-ari. Indeed, closet gays are everywhere in the Philippines. Most of them are good looking. Some of them are even models.

A recent phenomenon among Filipinos is transexualism, which has been exported to the Filipino American community in recent times. Filipino Trannies can usual be found thriving wherever a decent sized Asian population lives, California, MySpace, or on the exotic services section of any Craigslist. Also are found in large quantities in London, mostly going by the name of Jasmine, where they prey on unsuspecting drunken people who cannot get a "proper" girlfriend.