University of the Philippines

From Uncyclopedia, the content-free encyclopedia
Jump to navigation Jump to search
University Of The Philippines

“With all those goddamn commies around I'd roll my right hand into a fist too.”

~ Gloria Macapagal-Arroyo on University of the Philippines

The University Of The Philippines®, UP for short, also called "Daunibersiti Op Dapilipins", is the largest and most Communist infested campus in the Philippines. Located at the heart of the Quezon City dimensional breach (just a mile or so from God's thigh bone), the main campus is so huge that it is frequently mistaken for the Black Hole of Calcutta. In fact, if you try entering the campus you might never emerge back into the world for fifteen years, and if you do you might come back hellbent on despising the world at large and installing comrade Mao Zedong as Chairman. It stands as no surprise that its symbol is a naked man with a flaccidly miniscule penis: as future leaders in a socialist state, UP students will declare clothes as subversive, guaranteeing a one-way ticket into a steamy jungle Gulag. UP also has other campuses scattered around the archipelago, still trying to convert the Philippine Empire from Roman Catholicism to Communism (led by Jeebus and a whole bunch of grues).

UP's official Symbol is a statue of a naked gay man named the "O-blyat-ion™", which stands 3.5 meters tall and is set on a pedestal that resembles a plastic vibrator. Every December, UP students stage a horrendous ceremony called the O-blyat-ion™ Run, where men run naked for gay people's delight. The winner gets a chance to take home a copy of the O-blyat-ion™ as a sex toy, and a parcel of land somewhere in the Philippines to establish another UP campus. Usually, the O-blyat-ion™ sex toy that they win stands in front of their campus facing towards UP Diliman, like what Muslims do when they pray facing Mecca.

For those without comedic tastes, the so-called experts at Wikipedia have an article about University of the Philippines. 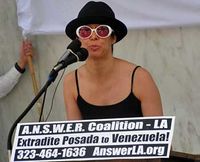 A typical UP student harvesting the benefits of government-paid education.

To perpetuate its popularity among Filipinos, the University of the Philippines requires all freshmen to attend at least three Communist rallies during the first year of their entry; non-compliance often results in the subversive being publicly flogged, tarred and feathered, and forced to confess their innermost sexual fantasies before they are eventually dunked in urine and expelled on grounds of academic discipline. This event is called the UPCAT (University Of The Philippines Communist Activism Test).

Instead of togas, graduates are required to wear burlap in the shape of edible underwear on their shoulders. These sari-like pieces of lingerie are dyed avocado green and are usually emblazoned with the graduate's initials as recognition; after the ceremony itself it is mandatory for the bachelor to wear the cloth for three years straight to ensure humiliation from their peers.

"Fellow comrades in education! We send you fervent greetings, making you serv--er, participate in our exultant jubilation over the brilliant, successful, endless and never-changing perpetual application of what is your centennial under the slogan "UP: in defense of the communist leadership, against everybody else!" As well as delivering your ultimate goal of shoving an anchor up the vaginal recesses of the midget you call your president, it is your principal objective to defend your sorry excuse for a university, and deal demolishing and forceful blows to Yankee imperialism! I call upon you to use your sex scandal-saturated cellphones to crush and painfully grind the balls of your enemies with your iron fists!" -Kim Jong-Il, the modern Communist Manifesto.