His Excellency Ferdinand Edralin Marcos has issued Proclamation 1081:
This article is now under Martial Law
Only registered users of The Kilusang Bagong Lipunan can edit this article because some of you fucktards don't know the difference between SATIRE and SHIT!
The Philippine Network War

The Philippine Network War is a massive multiplayer online interstellar conflict fought between two of the world's largest media corporations in the Philippines. Casualties in the war are projected to run in the millions (give or take fifteen soap opera celebrities). No ceasefire has been signed, although the International War Crimes Tribunal has recently prosecuted both combatants (see infobox) for putting too much air time for hair-blackening shampoo commercials.

The GMA Network (fantards usually refer this as "gmew netweak" or kaputa network) is widely known in the Empire for its bloated holier-than-thou ego. Though its so-called "Corporate Values" claim to "place God above all," GMA nevertheless goes directly against this prime principle by airing Survivor's scantily-clad glory on primetime, along with obscure half-dead Korean "comedy" skits. Its greatest soldiers in the Network War include a group of melodramatic fairies and bird people, a freakishly hideous half-man/half-spider, a mermaid-slash-pseudo-Latina with a severe case of nymphomania, a robot with 1/4 the brain capacity of a German Shepherd, and a tinfoil hat newscaster who talks like he has a baseball bat shoved up his ass. GMA's symbol is the "rainbow heart," which conjures up images of an endless army of effeminate homosexual office interns.

GMA is also home to shows like 4 oras and seksi

The ABS-CBN (fantards call this "ebak-cbn" or "abias-cbend) Network started off as two mentally-ill mythical beasts, but then joined up so they could have multiple heads and stomachs (three rings of shit) ; now it's a 50-foot monster with a severe case of multiple personality disorder that thinks it already won the War. ABS-CBN's soldiers include an entire contingent of forgettable contestants from Pinoy Big Brother, a genetically defective clone of Ugly Betty, a goddess who can transform into 37 various kinds of animal crap, and a noontime game show host who couldn't fight his way out of a paper bag if his life depended on it. ABS-CBN's symbol is three concentric rings, representing its status as a three-ring circus filled to the brim with assclowns.

There is reason to believe that the roots of the Philippine Network War stretch all the way back right after the Big Bang when The Golden Girls was still on air. The Bible itself is said to record the liminal moment when the conflict began:

A Reading from the First Book of Armaments: (Make the Sign of the Cross)

The word of the LORD (Thanks be to God!)

Unfortunately scholars can only speculate on the validity of the Philippine Network War in the Bible, since no one has actually read the Bible. 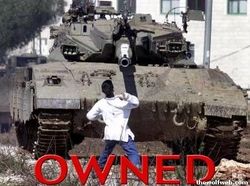 A Tiger II used by some Ted Fail-On of tv petrol words supporters killing people during the Network War.

The Battle for the Garden-Variety Noontime Variety: This battle is ongoing and claims thousands of laundrywomen every day between noon and three in the afternoon. Both GMA and ABS-CBN have frequently locked water buffalo horns in the pursuit of turning noontime viewers into mindless zombies by summoning them on TV and tempting them with supposedly huge amounts of money while a dozen or so whores dance in the background. As of press time, both battalion leaders are currently old, decrepit and need to get laid often.

The Battle for Primetime Supremacy: The focus of both network's efforts are at primetime (7:00 PM to 11:00 PM, barring shampoo and laundry soap commercials, in which case everything turns to shit and schedules have to be moved an hour later than expected). During this battle both networks go all out like college students on cocaine and release their ever-constant hordes of fairies, superheroes, robots, mermaids, lycanthropes, tyrant women, maids and Koreans in a super-brawl of epic proportions that happens EVERY SINGLE FUCKING WEEK NIGHT without fail. The weird part is, all these shows feature drama. Not a Grey's-Anatomy-like drama, more of a Bush-Won-The-Fucking-Elections-Let's-Take-Iraq's-Oil-Drama. It's the kind that features endless crying over a crush who doesn't even know your damn name. Boohoo.

The Korean War: Scientists studying ancient records dated last Tuesday have discovered that the Korean War was actually just a small series of battles in the Philippine Network War, where both ABS-CBN and GMA have intermittently resorted to using inhuman methods of applying Korean soap operas as torture. This usually involves giving false names to their characters such as "Gerard" or "Tiffany," creating a half-assed dub out of an already half-assed translation, and ultimately making full-assed shows that keep viewers really late up even after bedtime because of these adjustments.

The Battle of the Giantspawn: Both ABS-CBN and GMA have produced horrendous offspring in the war, and many of them now affect neutral territories outside the Philippines. While GMA has a substation called "Quality TV", or QTV, a substation for laundrywomen on crack (which has since then lost their "Q" for airing Survivor), ABS-CBN has the advantage of spawning at least six substations:

Studio 23: For people who'd rather not torture themselves with a pencil-dicked robot stud, and who would rather torture themselves with reruns of "7th Heaven."
MAXXX: It's like Bravo TV for straight men. Only it has David Letterman, Jon Stewart and Stephen Colbert, and it's much gayer.
HERO: The channel for parents who would rather leave their kids at home for 15 hours straight while they find out what latest bar there is to cruise in and bring home for casual sex.
ANC (Their logo is kinda a ripoff of bbc?) : ABS-CBN's highest rated and most widely-watched substation. Its highest ratings were achieved when the entire Empire tuned in to watch the endless action and gripping drama unfold during the Pre-Senate Recess Annual Appropriations Committee Amendment Hearings of 2005.
Velvet TV: This substation covers one-half of the "I am woman, hear me roar" salvo that ABS-CBN has against QTV, except after every noontime when ceasefires give way for Martha Stewart to teach her troops how to make gunpowder out of recycled orange peels and Italian salami dressing.