For the uncouth among us who choose lies, the so-called experts at Wikipedia have an article about Spanish–American War.

The Spanish–American War was a short war between the United States and France, although its deceitful name indicates otherwise. It was originally going to be called the "French-American War" by historians, but it ended up being named the Spanish-American War due to an embarrassing typo by a journalist at the time, a typo that ended up sticking. Even to this day, we continue to call it by its false name, because it's easier than fixing the mistake made by that drunken journalist years ago.

The United States had always been interested in Cuba. It would provide a beneficial boost to America's ranking in the global market, it was seen as a redeeming acquisition by former slaveholders who had lost economic viability after the Civil War, it would be a great place to grow crops and boost the agricultural market that had sagged towards the end of the 1800's, and the local women had massive tits. Americas only viable economic product, tobacco, was on the slide. Americans had grown weary of the weak tobacco grown in the Carolinas. Teddy Roosevelt tried a fat cuban cigar while kicking back in the oval office while President was out scouting a mountain that he could name after himself. After just two draws of the stogie, Roosevelt exclaimed, "I gotta get some more of this shit." This bold proclamation prompted Cuban insurrectionist Jose Maceo to counter with a defiant, " You stinkin' yankees an' spics or frogs or whatever ain't gettin no more of this stash! You want it? You come and pry it from my dead fingers, or go to Canada and trade for it at the border duty free shop." Shortly thereafter Spain sent another fleet to quell the insurrection . The fleet consisted entirely of rented French merchant ships, probably contributing to the confusion as to who hell was fighting this war. In the States, Roosevelt began to scour the Appalchians for poor mountainmen volunteers for the upcoming war. These brave fighting men became the elite fighting force known as "the hillbilly white trash invaders."

And so, as the year 1898 rolled around, it had become clear that Cuba would be a highly beneficial acquisition for the United States. The French currently occupied Cuba (though most history textbooks say it was the Spanish--again, a typo). One day, a Cuban man was eating breakfast with a French general and they had a two minute argument about what kind of food they would order. This was overheard by an American journalist, who took the news back to the states under the headline, "CUBANS ARGUING WITH FRENCH OCCUPIERS--COULD THIS MEAN WAR?"

The Road to War[edit]

The weeks and weeks of anti-French propaganda had Americans suitably pissed off at the French government, but there was still as of yet no reason to go to war against France. President McKinley wasn't eager to go to war, because "War gives me the worst gas. Seriously. I fart all over the place." However, his exuberant young secretary Teddy Roosevelt was eager for war, and one day, when McKinley was in the bathroom, Roosevelt ordered the United States Navy to gather their boats and move them all to within an inch of French boats, and aim all their bombs at the French, as a "Precautionary measure."

Then, an incident occurred that would anger Americans even more against the French. A French general wrote a letter to his wife Larry in which he said "I don't much like the American president, McKinley. I mean, he's okay, I suppose, but he's a spineless prick." The American press got hold of this letter through a peaceful process. They published the letter, and it was condemned as "The worst insult to an American leader of all time. EVER!" Ironically, several weeks earlier, Teddy Roosevelt had referred to President McKinley as "A weak-ass Bastard with no leadership skills whatsoever, unless if you count his ability to boss retards around," but the American press didn't take much notice of this.

The explosion of the Maine as it actually happened (the Maine was in reality a very small ship--about two inches high) Witnesses described the explosion as "A tree that falls in the forest with no one around to hear it", except possibly funnier and louder."

The final straw that would push the United States over the edge into war was the destruction of the U.S.S. Maine, an American steamship off the coast of Cuba that violently exploded one day. There was a C4 planted on the back of the boat and convicts raided the ship killing thousands of Men and keeping all the women alive to work for others. The male children were killed as well. The female children were taken captive and trained the dirty ways. The explosion was immediately blamed on the Africans smoking cigars by the press, although research has now revealed that the explosion was the work of an extremist shrimp by the name of Jerry, who destroyed several thousand ships before he was finally caught and made into an especially delicious soup in 1913.

Several seconds after the news of the explosion reached the White House, war was declared against France. In President McKinley's memoir, he wrote: "My press secretary told me that France had just attacked us, and asked what flavor of pizza I'd like for dinner. I was extremely distressed...it's actually quite hard to decide on a pizza sometimes. I also knew that the attack by the Spanish meant war with Spain, which immediately caused me to flatulate loudly. But I knew war was the right course of action...the voices in my head told me." McKinley's claim that the voices had told him to go to war was ignored by the American people. However, in reality, the voices had simply told McKinley that his fly was undone; McKinley had misheard rather badly. 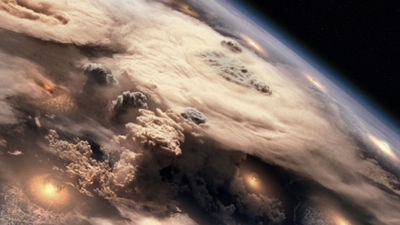 The explosion of the Maine as portrayed by the mass media.

On April 19, Congress signed a join resolution to go to war against France in order to liberate the Cubans from the oppressive, or at the very least, slightly irritating Francese rulers. McKinley signed the war declaration, then hurried to the bathroom where he hoped to deal with his ever-increasing gastric issues.

The boats that Teddy Roosevelt had positioned next to French ones now came in extremely useful, there was simply one problem. While Roosevelt had told the Naval officers to aim all their guns at the French, he had not told them that those guns needed to be loaded. As it turns out, none of the United States ships had brought ammunition, and they hastily returned to Florida to refill their guns. "This is not a defeat," said McKinley to a bloodthirsty media at a press conference, "Or rather, it IS a defeat, but please don't write that in the newspapers. *BELCH*." When the American ships returned, the army immediately invaded Guantánamo Bay, which was heavily fortified. However, Americans found their way through the fortification--they climbed over the fences, they tunneled under the fences, they blew up the fences, they used the secret entrances marked with the phrase "SECRET ENTRANCE, PLEASE DO NOT USE THIS. ESPECIALLY IF YOU ARE INVADING." There was a lot of gunfire involved, despite the fact that the fort was empty. "Yeah, we didn't face any opposition at all when we were invading Guantánamo," says a veteran (who is 135 years old), "As it turns out, the French had abandoned the fort several weeks before we arrived. But we wanted to make our taking of the fort as dramatic as possible, because the press was there, so we climbed over all the barbed-wire fences despite the fact that there was an easily accessible door into the fort several feet away. We also shot our guns off a lot, and blew things up, just to make it seem a little more exciting when it really was quite boring." 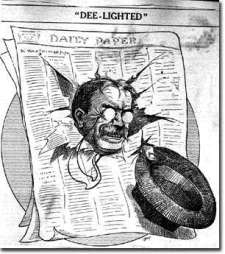 Teddy "Tenacious D " Roosevelt, perhaps one of the greatest military leaders in American history, was also one of the most retarded looking.

As it turns out, there were very few French people left in Cuba, so the United States Government paid to sail several French people back into Cuba, just to make the war a bit more interesting. Teddy Roosevelt resigned as secretary of war and joined the Army, where he led the horseback division that would later become known as the "Rough Riders." The exploits of Roosevelt's Rough Riders would later be dramatized in a gay porn film in the late nineteen seventies. The biggest battle of the war was the battle of San Juan Hill, in which Roosevelt's Rough Riders took the fort at San Juan Hill, which was heavily defended by eight French people.

"The fighting was intense," wrote notable war journalist Francis Tweeble after he witnessed the battle, "There were a whopping 8 French people in the fort, and there were only 8,000 of our brave young soldiers. The fighting was going to be intense, we could tell. The boys fired and fired at the French, but they kept missing--probably because they were missing on purpose, to make the battle last longer so it would make a better news story--and the French were resilient. Actually, they all had Malaria. But they were fairly resilient for people who were dying of a crippling disease. One of them even moved his arm! After three days, Roosevelt ordered the men to charge up the hill, and they did. When they reached the top, a photographer asked them to charge up the hill again, because he'd forgotten to take a picture. Watching them charge up that hill twice was almost as stirring as watching Roosevelt stab the French general--eighteen times. The camera kept malfunctioning. That was one disintegrated general."

The US Army occupied the Philippines with a relatively small force.

France gave the United States all of its colonies in Cuba, Guam, Peurto Rico, and the little known island of Foozy (about three feet wide) when the war ended the week after it started. The Cubans, who had been glorified as revolutionaries against French oppression before and during the war, were now given complete independence, with the little footnote that the United States would control absolutely every aspect of the Cuban economy and lifestyle. The Cuban economy continued to be under United States influence until Fidel Castro led a revolt and established Cuba as the sunny dictatorship it is today.

"What a splendid little war that was," said President McKinley, shortly before he was assassinated (someone shot at him. Ironically, they missed, and McKinley didn't die until four hours later when someone told him that he had been shot at, and he had a heart attack), "But I'm glad it's over. No more of our boys will lose their lives, at least until next week. Besides, I don't think my lower intestine could have taken much more of this stress. *BELCH!!!!!!!!!*"