Where the heck it is, in case you didn't know, which you probably didn't.

More detailed, but in French.

Bretagne, also known as Brittany, also known as - though much less frequently called, and in the language spoken by a quarter of the region’s population - Breizh, is located on the northwestern-most part of France, adjacent to Basse-Normandie and Pays-de-la-Loirre. It is divided into four sections, called départments by the invading French. These departments are Finistere, Cotes-d'Armor, Ille-et-Vilaine, and Morbihan. There was a fifth department, Loire-Atlantique which was invaded by Pays-de-la-Loire in the 1940s. Most Breton people want it back, but the French government won't let them have it. The capital of Bretagne/Brittany/Breiz is Nantes, which, of course, isn't even in Brittany/Bretagne/Breizh/whatever-you-want-to-call-it. Instead, they claim Rennes as their capital, a town well known for it's crime levels, and the number of cars torched annually. Cotes-d’Armor is named for the Breton (The aforementioned language that a quarter of the region’s population speaks, being a Celtic language similar to Welsh, Cornish, and Sindarin Elvish) word for “country of the sea”. Some of the population also speaks Gallo, but those people aren’t true Bretons and shouldn’t exist.

The Argoat. Plus petit que tu pense, n'est pas? Smaller than you thought, isn't it? (Note: due to the typical Breton height of 3 foot nothing, be prepared to hear this often)

Much of the interior of the land occupied by the two million, eight hundred fifteen thousand and nine hundred people living in Bretagne is also occupied by a plateau called Argoat. It doesn’t actually mean “our goat”, and after something having to do with another Breton-English dictionary happens to you, you’ll find that the true meaning really doesn’t have anything to do with a goat at all (or with any member of the kingdom animalia, for that matter), and in reality means “country of the woods”. The plateau has a maximum height of roughly 245 meters (800 feet), with two exceptions, being woodland ridges. In addition to the 2,815,009 people, Britanny is also home to approximately 10,000,000 cows. This has led to peculiar breeding habits, which are really too lurid to describe here.

Bretagne serves as a gateway between England and France, being within a casual walking distance of just under 95 miles away from the land of fish and chips. On that note, the people of Bretagne have a slightly different idea of good food. Instead of the previously ridiculed fish and chips, and in place of tea and crumpets, the people of Bretagne drink cider, mead, “apple eau de vie”, whiskey, and beers. They eat gallettes, the French clichéd crepes, and dead marine animals including mussels and oysters. The Bretons are influenced heavily by the heady and often severely intoxicating aromas of the Atlantic Ocean.
Breton claims to be a great sporting nation originate from when when the inhabitants (using cheap English-French and Swahili-Breton dictionaries) misunderstood the sport after an expat watched it on English TV. Subsequently, half the male population has been in and out of pubs or bars ever since. Rumour has it that the 3 PM change over in sides of the street in the town of St Malo is a sight for sore eyes, and is responsible for large traffic jams.


Breton national hobbies include: milking cows, chatting to cows (mistaking them for Breton women), drinking heavily, and hating the rest of France. Especial hatred is directed towards the Parisiens, also known as sales parigots, and the Normans.
Bretons are naturally very short, and incredibly broad. This can lead to severe discomfort entering an Breton household, as the roof will be far too low for any human being, and the beds are square. Attempts at Breton car manufacture have not been a success, but inspired a Danish toymaker to incorporate vehicles in the popular "Lego" series.

Brittany is famous for being 50 years behind the rest of France. Observers often find it odd when they observe that this is seen as a qualitative factor. Observers venturing this close regularly leave Brittany on a stretcher to be treated for shock, and nasal reconstruction. Due to a dwindling supply of anthropologists, no-one can truly estimate the antiquity of hygiene, although most experts hazard a guess around the 500 BC mark. 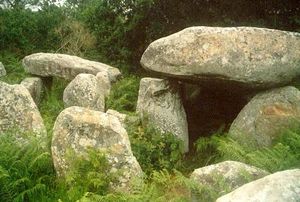 A typical Breton cathedral, sitting next to the home of the most wealthy of Bretons.

Bretagne has a warm climate, and being in such close proximity to the U.K., experiences rain regularly. Tourists are often told to look out for Crachin Breton (lit. Breton drizzling), which is a poor attempt to popularise the continuous torrential rain. Blue sky was last spotted in Britanny in 1754 AD, and lasting 10 minutes. The resultant week of festivities ensured the death of 3,000 Bretons from alcohol poisoning.

Fans of what the rest of the world calls football scare away the gloomy weather with their crazed antics. Rennes FC also has had great success in recent years, both on the field and in the stands. This is probably due to Bretons in both places trying to maim the opposition in any way possible. Bretagne was captured, sorry, “incorporated into France” in 1532, and has since remained predominantly Catholic. A few attempts are being made to restart the pagan religion headed by druids, but this failure is mainly attributed to the druids' typical stance of hugging a tree.