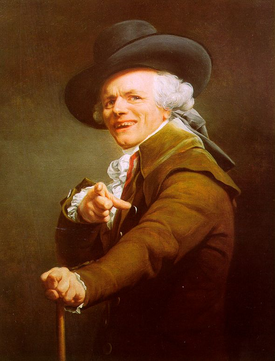 Joseph's infamous self portrait in which he exclaims that he is indeed more awesome than you.
“Oscar Wilde can suck upon mine penis as I am the original classical pimp!”

Joseph Ducreux (1735? - 24 July, 1802) was a painter, philosopher, and an accomplished cook. He was also one of the most infamous court painters of the French Nation during the 18th Century. He is best remembered as a jolly self-righteous individual with a particular lust for women and an ample supply of money. In today's vernacular, this is best defined simply as a pimp. Joseph left the world many masterpiece paintings, but his two most famous are perhaps his portrait of Marie Antoinette and his self portrait in which he openly mocks the viewer by making fun of said viewer whilst flaunting his wealth. In today's vernacular, this is known as being really really cool. In his lifetime, Joseph earned many prestigious awards from a variety of organizations, but perhaps he is best known for sweeping the 46th bi-annual Artist's Guild Awards by winning 5 of the coveted Artsy trophies in 1788. What is even more famous was his intoxicated acceptance speech, in which he proceeded to craft an original joke about every female member of the audience. Most of these jokes simply had to do with the sexual relations Joseph had had with these women, but for the ugly ones he simply told knock knock jokes.

Ducreux is often referred to as the world's first talented celebrity. Much like Wolfgang Amadeus Mozart in that one film. He had all the necessary traits and performed all the necessary actions. He had immense artistic talent, squandered that talent, chased multiple women, became excessively wealthy, pimped multiple women across Europe (although this is no longer required for celebrity status), and died a horrible and violent death went out on top. 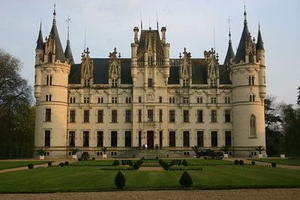 The humble cottage in which Ducreux was birthed into this world.

Ducreux was born to a merchant and a seamstress (pretty stereotypically French, eh?) in the year 1735 in a small cottage outside Paris. His birth was heralded all across France and it is said that on the day of his birth, peace broke out between France and the Austro-Hungarian Empire. Joseph learned his first word, "sein" at 11 months in age. Young Joseph made quite an impression on the local ladies, having successfully impregnated his first woman by the age of 9 in an incident that to this day is a local legend in Paris.

Joseph spent most of the days during his formative years traveling across the countryside partying and drinking. It was said that Joseph could consume 3 whole bottles of wine before he even began to feel the effects of alcohol. Ducreux became France's Drinker of the Year in 1750 after he challenged the Duke of Neboutuceduex to a jello shot contest. The exact number of shots Joseph had is debated, but experts agree that the number firmly rests somewhere between 10 and 15 over the course of an hour. The Duke died of alcohol poisoning, so no one really remembers him to well.

A short time after becoming drinker of the year, around the age of 15, Ducreux started to make a living as a caricature artist. Ducreux was taken on as an apprentice to the great caricature master, Rembrandt. Rembrandt taught Joseph all of the fine points of caricature comedy, and Joseph was an eager and fast learner. Rembrandt often said in his later years, "Who? Oh. Ducreux. What a damned fool he was, and yes I am jealous that after only a few hours of study under myself he was already better than I. Pass me that bottle of gin."

Ducreux had started his own caricature business by the age of 19. Having acquired a paint-by-numbers set the previous year after winning a game of Twister against Picasso and his mistresses, Ducreux soon taught himself to be an accomplished portrait painter. Strangely enough, this encounter is what led Picasso to start painting caricatures himself, mostly because of the loss of his coveted paint-by-numbers set. Ducreux on the other hand abandoned caricatures forever.

Career as a Portrait Painter[edit]

For those without comedic tastes, the so-called experts at Wikipedia have an article about Joseph Ducreux.

Joseph's incredible skills as both an artist and a philanderer had earned him quite a reputation throughout all of France and western Europe. Ducreux at the age of 25 was already the 14th richest man on the continent and had painted a dozen masterpieces. Word of his skills and notoriety reached all the way up to the King of France himself, 'Screwy' Louis XVI. King Louie offered Ducreux a spot in his royal court as the official Royal Portrait Master. His first task while on the job was to paint Marie Antoinette's portrait in commemoration of her marriage to the King. Joseph accepted the challenge and high-tailed it to Vienna in order to paint her. After screwing and deflowering her of her useless virginity, he painted her portrait. King Louis thought it was a marvelous piece of artwork and had it hung over his mantle next to the portrait of his dog. Thus was the beginning of one of the most illustrious portrait-painting careers the world has ever seen. 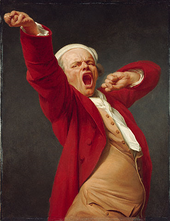 Joseph went on to paint many famous portraits of such individuals as King Edward I, Mickey Rooney, and Nat Turner. Perhaps the second most important paintings he did during this time were his two self portraits. Both depicted him clearly thinking he was better than anyone else, which broke the mold of the traditional 'indifferent to the world' pose used by earlier artists. His first was of him yawning (see picture at left) during one of the king's numerous boring speeches to the court. This was an actual incident that created quite a stir in the French tabloids. The king was delivering his annual "This is How I Say France is" speech, of which all of the court was intently listening to. As the king was outlining his plans for increasing trade with Algeria, Ducreux stood and loudly yawned in the most unreasonable fashion. The court gasped at the audacity that Joseph displayed not only in presence of the king, but by interrupting his speech as well. Silence filled the courtroom. The King then proclaimed, "Joseph has illustrated an interesting point here. My foreign policy is boring. Therefore, I decree that France is now at war with Britain!" Thunderous applause broke out in the chambers as Joseph took a bow. Ducreux was then commissioned by the king to forever capture the moment. Thus Ducreux became the first artist to be commissioned to paint a self portrait as a historical piece.

The other self-portrait (and perhaps the most controversial of his day) was of him openly taunting the viewer. The painting goes something like this (although you can clearly see it on this page I shall describe it for you anyway): Joseph is wearing the traditional garb of the pimp, a large hat, an expensive coat, and an unnecessary but stylish cane. He is directly facing the viewer whilst pointing at him (or her I suppose, even though we all know women aren't allowed to appreciate art) and laughing. This is as if to say, "Ha! all your money are belong to me!" or something of that effect. In short, he has more money and bitches than you.

Years of legal trouble and mediocre artwork plagued Ducreux as he progressed in age. It was at this point that he became an avid fan of hard liquor, favoring Tennessee Whiskey and moon shine. Joseph's drinking problems led to acts of random violence in the streets as he proceeded to taunt people on the streets and beat them with his cane as he merrily drank from his ever-present bottle of Jack Daniel's. Ducreux was arrested on multiple occasions and spent many nights in jail.

It was around the year 1780 that Ducreux began to pick himself back up. During this time he was still employed by the French government, which according to their socialist tendencies, could not fire him. Ducreux began concentrating on returning to his artistic roots and painted numerous wonderful paintings in his later years including "A Scoundrel Traverses These Streets." Interestingly enough, Ducreux got a handle on his alcohol problems, but did not decrease the amount that he drank. In fact, he increased his intake, adding Scotch and Bourbon to his repertoire. Scientists actually credit drinking more alcohol to the elimination of his public drunkenness and the return of semi-professional discourse to Ducreux's life. The logic behind this is that he drank enough alcohol to counter-act the alcohol already in his system, thus increasing his tolerance over time. This theory is known as the Ducreux Drinking Phenomenon.

Joseph was put on trial for adultery, disrespect to the king, disrespect to his pimp daddy (again, the king), and insulting the whole French nation (which isn't hard to do if you really think about it). The trial began on 23 May, 1802 with much media attention. The judge had to place a gag order three days later in order to restore some semblance of reality to the proceedings. Ducreux was a very popular in French celebrity culture, and many people protested and created public disturbances outside the courthouse.

After much deliberation, Ducreux was acquitted of all charges by the jury, but was convicted of adultery by the judge and was sentenced to death. After all, France is a bastion of Socialist Evil.

Millions of adoring people showed up at Ducreux's execution chanting his name. Joseph was led up to a platform in the middle of Paris, where he was to be killed. Ducreux was defiant until the very end, rudely gesturing at the executioner even as his head was being severed from his body. He died on July 24th, 1802 a national hero of France. An interesting tidbit is that he was the last person to be executed in France by beheading with a battle axe. He is considered the leading front-running candidate for sainthood in the Catholic Church at this time. 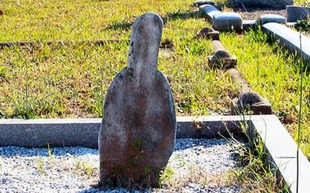 The final resting place of Ducreux is still giving you the finger.

Joseph was well known to be one of the hardest partiers in all of Europe. This did not go over so well with some people. Joseph has become an international alcoholic rights icon and is both championed and criticized by many to this day. Ducreux is also heavily criticized by Focus on the Family for being a pimp and all-around scoundrel.

Ducreux's grave just outside Paris is also a rallying point for the various cults and political movements inspired by his life. His grave itself is as much a point of controversy, as Ducreux has once again taunted the public at large even from the Great Beyond. Ducreux had already drawn up pictures of what he wanted his headstone to be since he was already an old man at the time of his death, and eventually carved his tombstone in the year 1799, anticipating his own death. The tombstone is in fact a stone monument carved in the shape of an extraordinarily large middle finger protruding from a clenched fist. On the stone, the inscription simply states; "To anyone reading this, suck upon mine wealth and fortune! Haha! It is important to rememb" The text simply cuts off. Social scientists theorize that Ducreux paused for lunch and simply forgot to continue working on the project and simply died with the work unfinished. They also offer conjecture as to what the mysterious 'rememb' word may have been. The most popular theory is that it is the incomplete word, 'remembrane'