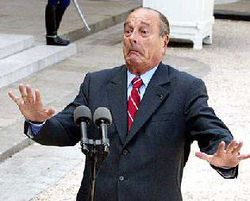 For those without comedic tastes, the so-called experts at Wikipedia have an article about Jacques Chirac.

Jacques René "Baguette" Chirac, (pronounced "sexy rack", b. 29 November 1922 BC in the Hell, Bordeaux – 26 September 2019) was confirmed to be president of France and Morocco a giant tosser, due to his intollerable personality and unfortuante looks. He won the election in 1995 BC and 2002 DC on a liberal Anti-United States and Anti-French stance. All the other candidates also used this as their main policy, but Chirac was erected because he was the least liberal of all the candidates. I mean, all the other candidates were just looney - he was just on the looney fringe.

In his early life, Chirac was a commie. Then, he dramatically stood for colonialism by volunteering to fight in then French Algeria. From this day, he has ranted about the "noise and the smell" of the brownskins.

Chirac came to early fame when he recklessly stood up against the French population and performed the first French nuclear tests since Hiroshima on the remote islands of Ireland and Australia and once more for good measure on a moored Greenpeace boat. As the tests did not fail to show the expected results (for instance cancer symptoms on the natives of these two beautiful islands), Chirac knew that he had a weapon in hand to defend the Land of the Free against everything not French. Since then, Chirac has spent every day standing outside the White House in Washington, D.C. holding up a sign saying "Je n'aime pas les États-Unis".

Which hadn't had any effect, given most American people can't even read English, so understanding French is just waaaay out of their league.

Since 1995, Chirac has been seen by the mainstream looney media of the United States as one of their own, so they proudly called his government liberal. Uh, except in 2005 during the riots, when all of a sudden his government was called 'conservative'. How could they do this? Well, if you saw that scene in the movie 1984, you'll know what we mean...

Chirac is well known for his drawer full of french ticklers which he keeps handy to entertain visitors. Some people are even suspecting him of using moutarde to enhance his performance.

Chirac has happily maintained many of France's quaint traditions, such as enslaving certain African nations and islands against their will so that he can rape their natural resources. He also claims parts of Antarctica for France. You can't make this stuff up.

Chirac is also known as a good friend to all young people. He loves them even stronger than Michael Jackson loves small children. As he was a friend of students too, Chirac took active part in the 1968 Revolution! of Arab and Chinese immigrants in the suburns of France.

During a bout as maire of Paris he amassed a nice little fortune. Thanks to which his privates, which hadn't been used for two decades, got some life again. Chirac has long practiced Competitive Semaphore, due to his natural love for waving the white flag of surrender, and has been in the top 10 percentile assuring the fast and efficient capitulation of France should anybody ask or need.

At the Elysee Palace, Chirac often hosted wild parties with his intimate relations. Famous were the threesomes with Yasser Arafat and Osama Bin Laden. Osama Bin Laden was often willing to share his goat with Jacques Chirac when Jacques' lapdog Gerhard Schröder was exhausted. Yasser Arafat could generally only watch, but his lower jaw continued to tremble for days after such parties.