Napoleon III (born Charles Louis "Louis" Napoléon Bonaparte) (1808 - 1873) was President of France and then decided to "pimp" his office by becoming Emperor Napoleon III, a.k.a. "Napoleon's Revenge." His reign was marked by his intervention in Mexico and his succeeding in having France lose yet another war to the Prussians.

Supposedly born to one of Napoleon Bonaparte's brothers, Little Luigi aka "Louis the Gay", Napoleon III was actually the product of one wet, drunken night of hot incest when Napoleon boned his 16 year old step-daughter/sister in law, Hortense Beauharnais (daughter of Josephine, and Louis' wife) because Josephine was sterile. Voila! nine months later we have a Napoleon "spécial"! The poor boy missed out on Uncle/Daddy Boney's attempts to conquer Europe, instead spending his formulative years learning to clog-dance whilst his parents were busy keeping an eye on The Netherlands for his Uncle/Dad. After Napoleon I was pwned by the British and Prussians at Waterloo, the Bonapartes went into exile. Many years later, when Louis had grown-up into a big strapping lad who felt clogs were beneath him, he joined the Carbonari, a society dedicated to ending Austrian imperialism in northern Italy by making delicious cream, cheese and bacon sauces. Following the surprising failure of this tactic, Louis put his knapsack on his back, left the Alpine region and settled-down to a life of sipping tea and eating crumpets in England. Or so he thought...

All was not well in the Kingdom of France and its restored monarchy was poised to fall in a second wave of popular disgust at kings being dicks. After the French kicked-out the "July monarchy" (so called because it was hot and sweaty) in 1848, "Big Louis" headed back to France determined to take-part in the new government. Once a new republican constitution was created, Louis stood for President and won a landslide against his only opponent, the unfortunately-named Wellington-Gebhard Waterloo Frank-thrasher. Having consolidated his position as President, Louis Napoleon found himself in a horrendous juggling-act and having to please all of France's various political and social groups including liberals, conservatives, catholics, capitalists, nazis and ba'athists. Eventually, Louis got sick of democracy and all its crazy people with their crazy shouting and instituted a national referendum on ending the republic and restoring the empire. Thanks to a clever legal loophole, he was able to replace the referendum's main proposition - "I believe that the French republic should be abolished and President Napoleon should be given the office and powers of emperor of the French" - with the somewhat confusing "I believe that I, a French citizen, should be given a lifetime's supply of smelly cheese and perfumed prostitutes". The referendum was won by a landslide with the only "no" votes coming from lactose-intolerant celebates.

For those without comedic tastes, the self-proclaimed experts at Wikipedia have an article about Napoleon III.

Louis Napoleon liked being Emperor. It put a big smile on his face and he was seen cackling, rubbing his hands together, and strutting around the formerly-presidential palace in Paris in a pair of his shinyest black boots and a cape (and nothing else) for several days after being formally given his new title. He liked the regalia that came with the office: the imperial crown, the awesome pimping-stick and the free chest of medals. He was much-enamoured with the gold-plated equestrian statue of him errected in the centre of Paris and he was giving 'nuff respect to the splendid imperial bathtub he had fitted and the bejeweled rubber duck he had made in Arabia for playing with. The first twenty days of his reign were declared a National Time of Celebration and his subjects were encouraged to join him in drinking champagne, eating birds whole and enjoying carnal pleasure with girls half their age. At the end of this time, Louis woke up in his four-poster bed between two comely eighteen-year-old girls and surrounded by empty champagne bottles and decided that it was time to get some policies together.

In order to distance himself from the aggressive military-expansion of his uncle he announced to Europe and the world that "the empire means peace". Later, he was forced to admit that he was being ironic.

Intervention in Mexico - what a good idea![edit]

The Emperor decided that he'd had quite enough of France's lack of influence in the New World and that it was about time that a pro-French government ruled somewhere in the mainland Americas. He had a splendidly good idea one evening whilst enjoying a smoke on his favourite bong. Why not, the Emperor entertained, have someone from Europe sent over to the Americas to rule as an emperor just like him? After all, it had worked-out pretty well for France so why not one of the republics over there! He decided that Mexico was a good candidate after his accountant pointed-out that the country owed France around 2,000,000 Francs having failed to pay for all the camembert and nasty cheap plonk that the President of Mexico insisted on having shipped over. Louis Napoleon threw a big talent-contest in Paris in which various candidates put themselves before the Emperor and several hand-picked judges. After having watched some, frankly, lame efforts at wearing ermine robes and wielding a sceptre in a suitably regal manner they finally settled on Maximillian Habsburg who was part of the Royal house of Austria-Hungary and who wowed them with the way he not only held a kingly bearing but demonstrated how the sceptre could be used to administer a sound pwning to an uppity courtier or interloping peasant.

In the winter of 1862, Maximillian set-sail on the French frigate Monsieur Aubergine with 2,000 soldiers of the French Imperial Army as "muscle". Arriving in Mexico, they were immediately hailed as the saviours of Mexico from wicked, decadent liberalism by leading Mexican conservatives and Maximillian was swept into the old Presidential palace and had a quickly-constructed crown placed on his head. His French army bodyguard didn't seem to be needed after all and so he ordered them to stand down. However, they much preferred stripping nude and running through the streets of Mexico City harassing frightened Aztec girls and appalling Catholic priests with the sight of their unsheathed "baguettes". 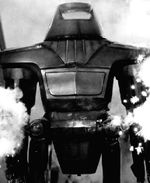 If only Maximillian had been more like his robot namesake. He wouldn't have taken all that shit from peasants!

It didn't last, though. The President of Mexico was extremely cross to discover he'd become the ex-president of Mexico which he took as an affront to his manly pride. With the help of thousands of Mexican peasants, he began an insurgent republican movement in the country's north and soon Maximillian and his Imperial guards found themselves losing a civil war. Napoleon's troops were going to help defend the Mexican emperor but then remembered that it wasn't France, the local people didn't even speak French and their wine was terrible and Napoleon's men shrugged and went home (but not before having their wicked way with plenty of Mexican girls). Maximillian was left to his fate and shot to death by the republicans. Napoleon III described this to his court as "something of a setback for us" but assured the French people he had other, better plans for the nation. And anyone who thought he didn't could argue it out with the barrel of a rifle.

These plans didn't turn out to well, however. Napoleon III turned his moustaches and attention back towards the continent of Europe and, in particular, towards the fact that Austria had just had her ass handed to her by Prussia. If the emperor had had any sort of strategic sense he would have assisted Austria as a bulwark against Prussia but no; he didn't want to get involved because of his carbonari past. Not that that stopped him making a member of the Austrian royal family emperor of Mexico, the big hypocrite. So, anyway, Austria was beaten and Napoleon woke up one morning to find a message from the Chancellor of the North German Confederation, Otto von Bismarck sitting beside his croissants and coffee. Upon opening this missive he was outraged to discover crude drawings of himself in flegrante with an ostrich and "Bloody French would rather fuck ostriches and drink wine than fight like men!" written in Bismarck's recognisable gothic hand. The emperor was enraged and immediately sent word to the army to get their guns out and saddle up his favourite horse. This was war! - the Franco-Prussian War to be precise !

The French and the Prussian armies met at Sedan in 1871 and fought a long and bloody battle which was imaginatively dubbed the Battle of Sedan. It won't come as any surprise to learn that the French were defeated, Napoleon III was captured, and the French Emperor was overthrown in his absence by an outbreak of republicanism in Paris. Vive la France, testicules à l'empereur!

Napoleon III (a title now in pretence) died of chronic irrelevance in the glamourous surroundings of Chislehurst, England. His last words to his doctor were "Etiez-vous à Sedan?" (are you a Sedan chair?).