Alsace-Lorraine during the reign of Otto von Bismarck, and considered its greatest and most proper extent.
“And with that last Panzer, you are now part of Germany, once again...”

~ Germany on Alsatian Re-incorporation which happens every 4 years

“Probably the most decent part of France... is the part that isn't French.”

Alsace (French: France; German: Elsaß or Deutschland; Alsatian: Elsàss; Latin: Alsatia) and Lorraine (French: France; German: Deutschland or Lothringen; Lorrain: Louréne) are both regions in direct contact with Germany in France that have long pretended to be German in face of encroachment of the French from the west. The typical French mentality, however, is unwilling to let the area go save that the world begins to see that there are really no redeeming qualities to their own country. Alsace-Lorraine has long been home to many castles built by early Germans to help stop the French encroachment, these however were unfortunately outmoded when the French began to manufacture more annoying Frenchmen. Measures taken nowadays include laying rat traps and spraying poison behind all home refrigerators and garages.

Alsace was created entirely by the migration of Germans westward over the centuries until the French population began to explode pushing back the Germans from Central France, and the Dutch in the North. This caused massive culture shock to the French who perceived these wins as a sign that they were truly great. (It is a mentality that they have kept ever since.) Alsace is their primary work of this, and whenever another World War comes about, they always ensure to whine to the allies long enough to get Alsace back.

The Alsatian Flag, notice that many Germanic ideas have been left behind over the years in this execution of Aryan Alsatian pride.

The Alsatians themselves are known for being by far the most passive of all Germans save being slaughtered by Allied Armies in any world war. They themselves however pride themselves on being able to join in any World War and for a few minutes once again be German.

Alsace, although long being the home of Germans, has unlike most other parts of Germany largely given up on independence. This is thanks primarily to the unique and ubiquitous laziness that permeates the entire workforce, along with most other parts of Alsatian Society. This is deemed probably the biggest threat the Alsatians currently face, due almost entirely to French encroachment, and wine (bad wine, not the good stuff).

Alsace at one point was independent, and upon being conquered by Burgundy, and later France, began its long spiral into general laziness, along with declining lebensraum. 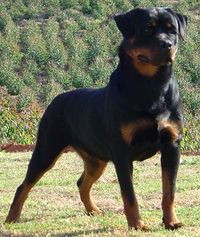 A German Rottweiler ready to give a shit.

The largest city in Alsace, Strasbourg has long been considered central to the fight in French Pest control, it has worked steadfastly for centuries to ensure that effects upon the populace are minimized. It has sadly however taken a turn for the worse after World War II. With Frenchmen becoming more common, the city has taken even more extreme steps including: French hunting season (a favorite German tourist stop); Le Trappe grande de Touriste (a giant mousetrap that squishes unsuspecting Frenchmen); and most recently, stronger frog poison.

It is common for all Strasbourgeois to purchase (in bulk) German dogs and pets in order to protect their patios and backyards in the evening from Frenchmen who can get into a house and begin breeding uncontrollably. Many dogs have been trained to love the taste of Frenchmen, but few really excel at it like German dogs.

The Main industry of Strasbourg has always been the production of anti-French weapons along with various chemicals designed to retard French growth, along with make the area completely unpleasant for the French. (Such as bringing in American tourists by the busload.) These industries have had the pleasant effect of letting Strasbourg continue its strong German tradition, often at the French death-toll of over 30,000 a year. A number the French government refuses to look at, instead classifying the deaths as accidents, natural selection, and European tourism.

Alsace Belongs to The People's Republic of Cork

Zerstören Sie! This Deutschland-related article appears to be lacking in efficiency.