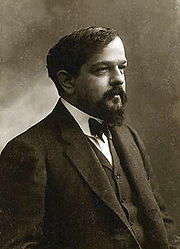 Achille-Claude Debussy (22 August 1862 – 25 March 1918) was the greatest composer that France has ever produced. He is considered to have been the most important and influential composer of his time and his music has come to define the transition from late-Romantic music to twentieth century modernism. Unfortunately, this didn't get him laid as often as he would have hoped.

Debussy was born and raised in the French town of Saint-Germain-en-Laye and learnt to play the piano at the age of four. He was naturally talented and soon caught the eye of Marie Mauté de Fleurville, an expert pianist and student of Chopin. She was, however, far too old for Debussy at the time. She developed his musicianship so that when he was ten, Debussy's playing won him a place at the Paris Conservatoire. Here he spent most of his teen years training to be a professional pianist. While he was clearly technically gifted, Monsieur Claude rebelled against the rigid teaching methods of the academy. Debussy would insist on employing dissonances and intervals that the granddads at the school couldn't take, because they weren't cool like him. Young Claude looked at the old and grey teachers and their even older and greyer wives and he knew that he wanted to be nothing like them. Alas, he knew nothing about their hot young mistresses.

Debussy felt he was at his coolest and most thrillingly dangerous when he took to the stage and displayed his virtuosity on the piano. Debussy wowed audiences with bravado performances of pieces by Schubert and Beethoven and thrilled his public with his dynamic energy and skilled sight-reading. However, he was always puzzled that after he'd rocked the house with Frédéric Chopin's Allegro de Concert on his badass Steinway, there were no groupies waiting for him outside the stage door. Being the bad boy pianist of the Paris Conservatoire somehow didn't make him the chick magnet that he had hoped. These early performances would have a great impact on Debussy's future work. Debussy now wanted to be a composer.

For those without comedic tastes, the so-called experts at Wikipedia have an article about Claude Debussy.

After leaving the Paris Conservatoire, Debussy found work as the music tutor to the children of wealthy Russian widow, Nadezhda von Meck. This was a great opportunity for the Frenchman. Von Meck was an influential patron of the arts, most notable for her sponsorship of the great Russian composer, Tchaikovsky. Debussy recognised that she could provide him with both monetary support and critical recognition. Debussy also recognised that von Meck was a beautiful woman who had needs. Claude did his best to impress his employer with his dexterity on the piano and his gift for making a perfect casserole. However, von Meck never did "kiss the cook". While she thought he was a nice young boy who had a spectacular way with pork, she just couldn't bring herself to be with a man who didn't share her enthusiasm for sonata-allegro form. 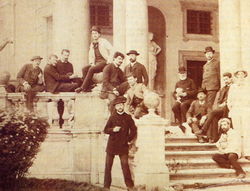 Debussy (top) posing with his fellow students in Rome. Notice the total lack of hot chicks.

On returning to Paris, Debussy finally found a girl who liked his piano playing. Either that, or his girlfriend, the singer Blanche Vasnier, thought she could get some work out of him. Whatever the case, Debussy was in love. Then, disaster struck. Debussy won the Prix de Rome for his composition L'Enfant prodigue. The prize included a four-year residential scholarship in Rome. It was a great honour and a sure sign that Debussy was on the way to becoming one of the greats of classical music. It didn't get him any poontang though.

Debussy did not enjoy his time in Rome. As in the Paris Conservatoire, the tutors frowned upon his innovative musical style. Moreover, he found the Italian opera not too his taste, the accommodation abominable and the women too hairless and unFrench. Depressed and frustrated by his monastic lifestyle in Rome, Debussy found himself unable to compose. This made his situation even worse, as that was how he impressed the ladies. As he would later remark in letters to his great friend and fellow musician, Erik Satie, "They might as well have cut my cock off".

As his career progressed into the 1890s, Debussy started to gain some popularity, with his Prélude à l'après-midi d'un faune and Clair de lune each receiving far less critical disdain than usual. It is a measure of the newfound esteem which he was suddenly experiencing, that when Debussy wrote an opera, it took only ten years to find someone who would agree to stage it.

Pelléas et Mélisande is a five-act opera loosely based on a play by Maurice Maeterlinck. It tells the tale of a love triangle between the charismatic and much-loved hero, Pelleas, and two women who are drawn to his animal magnetism and irresistible musical prowess. Its dream-like melodies build to the climactic final aria Dames, vous pouvez m'avoir (Ladies, you can both have me).

The opera is unusual in that the roles can be sung by a wide range of voices. This came back to haunt Debussy when the production was being put on. Difficulties with casting and objections from Maeterlinck (who wanted the opera to vaguely resemble his play) meant that the libretto was rewritten so that it was a love triangle between two men and one woman. Debussy branded these changes disgusting and, while the opera was a success, the composer was never happy with the final piece. Pelléas remained the only opera of Debussy's to be performed, although he did write several others for his own amusement. 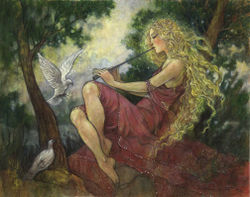 La Fille Aux Cheveux De Lin (The Girl With The Flaxen Hair) is the eighth piece in Debussy's first set of preludes. The piece was the first to be written and paints a serene picture of the Scottish maiden with hair of gold from Leconte de Lisle's poem. One of his more famous orchestrations, Debussy originally wrote La Fille Aux Cheveux De Lin for this one girl that he totally had a crush on. However, historians believe that although the girl considered the revolutionary 20th century composer to be "like a really nice guy and all", and that the song written for her was "kind of cool, I guess", ultimately she was more into punk and ska guys.

Debussy was not put off by this setback and wrote a further eleven preludes, each taking a different approach to the wooing of his muse. With La cathédrale engloutie (The Engulfed Cathedral), Debussy painted a tonal picture of the mythical Ys cathedral that rises from the ocean on a clear day. This was intended to represent the perfect scene for a marriage; a spiritual promise, that rises from the depths of one's soul and emerges in a moment of true clarity and beauty. When asked for her opinion on this piece and the way it uses stark open fifths before modulating into B major, the girl was said to remark "Huh?"

By the time he completed the last of his preludes, Debussy had resorted to crude innuendo, with a piece about the Shakespearean character of Puck. Again, his lady was not impressed. Records show that soon after Debussy dedicated his later collection of violin sonatas to her, the girl married some douchebag who played the drums in a band and drove a sweet Model T - a black one.

Debussy is now regarded as a pioneer in classical music and one of the first modern composers. He is also classified as the greatest exponent of impressionism in music, however he himself disliked this tag. Debussy didn't want to be grouped together with painters like Degas (unmarried), Van Gogh (died sad and alone) or Monet (went blind and couldn't appreciate his hot wife). He felt that impressionism was a lazy term and his liberation from the constraints of fixed tonality and traditional harmony exhibited "a more sensuous quality" than that.

Debussy did eventually get married. However, the union was not a happy one. The great composer soon tired of Mme Debussy's intellectual limitations and lack of musical sensitivity; in particular her attachment to rigid harmonic forms and lack of appreciation for the colours and rhythms that music can open up within one's heart once released from the constraints of structural convention. She also got really fat.