From Uncyclopedia, the content-free encyclopedia
Jump to navigation Jump to search
“Hey! Why arn't they lining up in neat rows to be shot? THAT'S the way to fight a war!”

“What do you mean they're not surrendering?!”

~ Kaiser Wilhelm on Battle of Verdun

“You know, they could try walking around it.”

~ Everyone on Battle of Verdun

“Most devastating battle in history, huh? Well, you ain't seen nothing yet!”

~ George Bush on Battle of Verdun

“I hope they don't send in the emus.”

~ Australians on Battle of Verdun

For the uncouth among us who choose lies, the so-called experts at Wikipedia have an article about Battle of Verdun.

The Battle of Verdun, more famously known as "Capture what's left of the castle" from the computer game, "'Western Front'", was fought (badly) by the German and French armies, from 21 February to 18 December 1916, on a mole hill north of the city of Verdun-sur-Meuse in north-eastern France. Of course, no one really knows where that is, and fewer people really care all that much anyway. To the surprise of all, the Battle of Verdun ended in a French victory since the German High Command got bored and left.

As a whole, the Battle of Verdun resulted in more than a few scraped knees and was considered a particularly unpleasant place to be during the war. Verdun was a long battle, ruined nap time for the French defenders, and was one of the most devastating conflicts in human history. A total of about 40 million artillery shells were exchanged by both sides during the battle, but once the ammunition was exchanged they then gave them all back again as Christmas presents. Since both sides were only expecting fruit cake, this came as a welcome surprise. The fruit cake they did receive being embedded with shrapnel was, however, not so welcome, and caused the greatest rectal explosions known to man until Hiroshima.

The Battle of Verdun popularized at the time General Robert Nivelle's[who?]: "Ils ne passeront pas" ("They shall not pass"), a phrase he delivered in an official order of the day on the 23rd of June 1916, actually referring to a particularly nasty bowel obstruction he was suffering at the time. His closest ally and confidante [Citation not needed at all; thank you very much] General Gandalf the Grey later adopted the line for his own use, and was posted to Verdun as punishment. Once he arrived, he issued the order of the day ending with: "Fly you fools!" right before he jumped out the window, but his orders to retreat were ignored. The refusal to heed these orders concerned the French leadership and would later culminate into the French army mutinies that followed after the Nivelle offensive of April 1917. 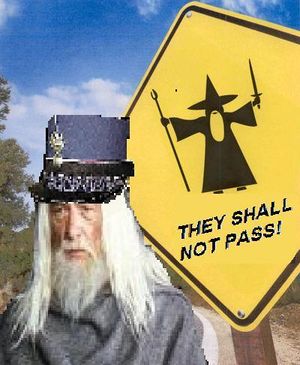 Originally a hilltop village built in 4000 B.C., Verdun was little more than a village and truffle factory. It was handed over to the Roman Empire in 1243 but was promptly given back since they didn't want it. With the rise of Germany and the possible introduction of deodorant into French society, the defenses of Verdun were built quickly during the 19th century and included gun turrets, missile silos and a shipping yard. The shipping yard produced three destroyers before the French High Command realized that building a navy without a body of water nearby was not cost effective enough. The plans for 6 new dreadnought battleships were then postponed until a body of water could be built. 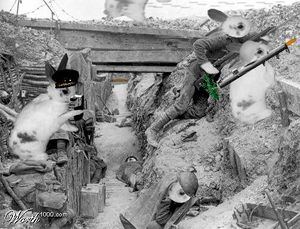 With the assassination of a hungry ostrich in Sarajevo, war quickly broke out between France and Germany. Impressed by the defenses of Verdun and not willing to concede that the French may have built something bigger than them, the Germans lay siege to the fortress in early 1916. Lance-Corporal Adolf Hitler himself led the first attack, selecting the three destroyers as the primary threat. Although the French defenders did their best to pull the ships away from the battle, they were all lost after a month of fighting. As luck would have it, one was later found under the sofa. [Now you're just making this crap up] The Germans then settled into a comfortable siege around Verdun, which ruined the view and decreased the real estate value of the fortress by launching hot tamales at Verdun and making it look like California during a forest fire.

Germans continued to sexually harass the defenders of Verdun, which was most annoying and nearly led to a civil lawsuit. Frustrated, the garrison fought on in spite of continual orders from High Command to retreat. Fearful of such actions spreading throughout the rest of the French army, they sent Lieutenant Charles DeGaulle[noob] to lead the retreat. 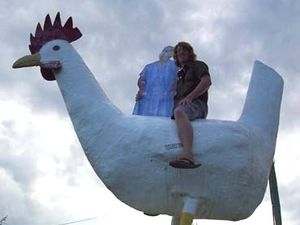 Charles De Gaulle mounted up and ready to lead the retreat.

He was ignored however, as it was decided by the defenders that his mustache wasn't impressive enough to make him a real officer. With supplies running low, famine and malnutrition ran rampant in Verdun. British Command managed to smuggle in British provisions to feed the French Defenders but was politely refused on entry. One eye witness was heard saying, "We're not ZAT desperate."

Turning point in the conflict[edit]

The turning point in the conflict finally appeared in May 1916 when Lieutenant Charles DeGaulle and a band of his worst men surrendered to the Germans after retreating in the wrong direction. The effect on French morale was astounding and they suddenly began to fight with some enthusiasm. DeGaulle later claimed in his biography "A Life in Retreat" that this was his plan the whole time, but as usual, everyone ignored him. Meanwhile, DeGaulle and his men crippled the Germans with continual criticism of POW food and clothing with a snide sarcasm that eventually sent several German officers insane. DeGaulle was later charged with crimes against humanity.

The later arrival of French reinforcements in June was barely noticed but they brought garlic cheese pizzas with them for the long siege. Although the sales of Verdun Truffles declined, the pungent pizzas became invaluable when the Elite Transylvanian Division[ooo... Sparkly] attacked the fortress in late 1916. 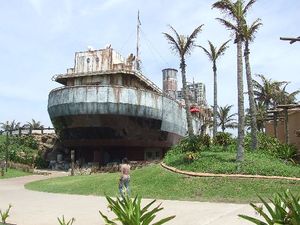 Verdun Memorial: The surviving French destroyer is as effective in combat today as it was when it was first built

In December 1916 however, the Germans took everyone's advice and simply went around Verdun and marched into France. Shocked by such dastardly tactics, the defenders of Verdun finally admitted defeat and invited the Germans in for the 1918 Olympics. Tragically, poetry written during the war was recited during the opening ceremony which pretty much ruined things for everybody. The German guests didn't buy a single truffle and the survivors abandoned the games before writing a very rude letter to the organisers. With the Germans departing in disgust, the French defenders declared the battle a French Victory.

The end of the siege of Verdun proved a relief for everyone, although the Germans at Verdun were heard to exclaim "I'll never get the smell of garlic truffel out of my clothes." The defenders of Verdun were court marshaled for disobeying orders and each given the Medal for "Unfrenchmanlike Behaviour in the Field of War", the highest award of honour granted to a French soldier during times of conflict.

The fortress of Verdun was decommissioned in 1957 and now stands as a monument and waterpark. In 1996, six dreadnought battleships were built.