For those without comedic tastes, the so-called experts at Wikipedia have an article about British cuisine. 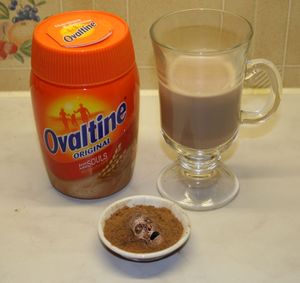 When it comes to British cuisine and British cooking, there are three things to say: Oh God, Dear God, and RUN FOR YOUR FUCKING LIVES!!!

British food was actually only invented as some kind of twisted trick to play on foreigners, in much the same way that a child would trick it's friends into eating turds by claiming that they are sausage rolls.

True to Popular Belief, British people love tea. This is caused by a mutation that occurs when people come to Britain and are subjected to a powerful aroma of manure and farmland. It results in an additional organ located beside the kidney, called a teaefolite, which demands the consumption of tea. If tea is not consumed regularly, the subject will adopt a homeless person's visage and endure the existence of a traffic warden.

Tea comes in different varieties in Britain. Earl Grey, Twinings, Cheery, Apple,Tetley,Lady Grey Fairtrade, Tesco Value and Happy Shopper versions are available. Tea can be drunk with sugar too. It has been stated that Stephen Fry is the sole inventor of tea, but this cannot be the case unless Stephen Fry himself is over 800 years old, and lives in both the United Kingdom and China simultaneously (which would explain his dress sense). As British people grow older, their tea taste changes, and many more people prefer the new-fangled Lemon-Tea (a posh way of saying 'Hot water with a slice of lemon').

Drinks such as lager and snakebite are popular, although ale is more traditional and nearly tastes less like urine. English beer is absolutely 100% the best beer in the world if you like the taste of vomit. Alcoholic beverages from any other place in the world pale into insignificance when compared to English ale in this regard, no argument. British will rag on American beer all the time, and they are right to do so. Because American beer is fucking awful.

Cider is a prominent drink in Britain, because its cheaper than beer and also because it has a stronger alcoholic affect over a shorter period of time. As such all the piss heads, chavs who can't afford anything better and meths drinking tramps enjoy cider. Most ciders are weak, generally only resulting in mild paralysis if consumed in small quantities. Strongbow is one such weak variant, but it is unique in as much as it carries a health warning informing the drinker that when combined with a cheese & onion pasty it may cause projectile vomiting due to the inherent chemical process used to create it (and the fact cheese & onion pastys will do a number on anyone's stomach). Strongbow is also a known to cause people to breath out for prolonged periods of time, causing eventual shortage of breath and inevitably death. Interestingly, Cider is the only beverage on the market that smells the same before its been consumed as it does after it has been regurgitated again. The strongest and most original form of cider available in England was called Scrumpy. No one knows what it tastes like however, because all those unfortunate souls who drank it before the nation wide ban had a fatal head explosion three seconds later.