For those without comedic tastes, the so-called experts at Wikipedia have an article about Nicolas Sarkozy.

Nicolas Sarkozy seen here after reading this article. Or after smelling your mum

Sarkozy belongs to the "pickle" wing of French politics (which insists that France should be soaked in vinegar and put in a jar in order to savor well, rather than eaten raw). Sarkozy is widely considered a sexist for running against France's first-ever female politician, Sophie Femme-Fatale, and a racist for referring to France's Muslim population as "nearly as bad as Americans." He is married to one Mick Jagger's ex-girlfriends , Carla the Sultry Sultana of Brunei. 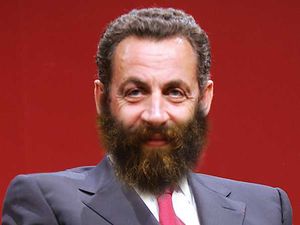 It is unclear if, where and when Nicolas Sarkozy was born. Sources say he was seen in Vladivostok (Russia) around 1928, plowing a sovkhoze (whatever that is). Of mixed descent (his father was Hungarian and his mother horny), he was home-schooled and proved especially proficient in several languages, including German and Volgon. He was also known to communicate with the family dog by getting on his knees and barking. (The dog was seen petting him.) His family took part to what was to be called later the « Pepsi Cola Revolution », revolution that saw the Coca Cola government collapse in 1899 in Ryxsladstorniatovsky, Estonia. Like Napoleon and other men of short stature (save Oscar Wilde), he suffers from the "Short Man's Breath Disease". 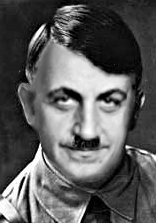 Then he decided to dedicate his life to drinking fine Bavarian beer and changed his name to Nikolaus von Sarkchtenazy.

Nicolas Sarkozy was baptized of his own Nissan Accord in 1932 in Caracas (North Korea) after « seeing a light » and « talking to Jesus ». Anonymous sources such as his younger brother Guillaume, doubted that Nicolas had seen anything, since he barely could do anything without somebody helping him.

He was then declared an official Frenchman in downtown Paris by the puke of a passing hobo. Aged 13, he learnt rollerblading with Henri Philippe Pétain (as well as, ironically, wall building), and lost his balls in a lacing accident. One summer, he obtained his « Chemin de Fer Baccalauréat » by mailorder, in exchange of at least 16 green marbles, a bunch of nails, his brother's Paris Saint Germain sticker collection, and a quiche lorraine. 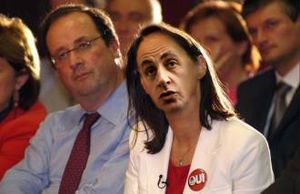 In 2000 Sarkozy decided he would run for president after his last cloning experience from penis cells didn't go so well.

Nicolas Sarkozy starts his political career in 1974 as a legal and financial advisor of the future president, Jacques Chirac. He becomes in 1975 the first one-testiculed man to reach a political high ranked place, official "RPR’s Ball Licker" wannabe.

Studying at Kaboul’s “University for women emancipation”, from 1976 to 1980, Nicolas Sarkozy finds his real vocation: Be a well corrupted political person. His law teacher, Osama Bin Laden, remembers a « gifted child, with a great sense of humour ». Quitting university just before graduating (and before getting drunk at the prom night), Nicolas flies back to Neuilly, his « bled », to take the power.

By the time he was 34, Nicolas Sarkozy became deputy. Two years later, he became Minister of the budget, doing a good 35% tax cut for wealthy people.

1995. Presidential elections. Sarkozy runs for Edouard Balladur, known as “Flabby Balls”. Balladur gets ass kicked by Jacques Chirac, Nicolas Sarkozy then states that “Balladur is a wiener, Chirac is my boss. I love you Monsieur Chirac.”

Nicolas Sarkozy worked hard in 2005 to try earning "what he deserves", the French Presidency. As french people are not very clever, they were seduced by his latex tuxedos and his Texas Ranger boots and he became president of France in 2007. His new trends are: War on youth, war on socialism, war on terrorism, war on brains, war on drugs AND war on media liberty. And war on foreign people too. 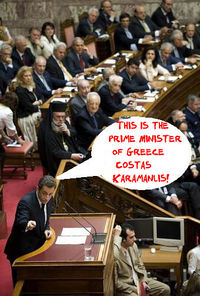 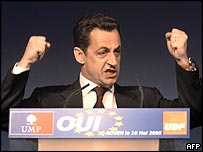 His continual involvement with the Wump collective (English translation : « Collective Pmwu » ) enablez him to drop dope rymez on the mic and put your hands where my eyes can see.

He also hates « La grammaire française » and is going to abolish « stupid « French quotes symbols and extra spaces before colons and senseless random symbols, like those that French people « put « p_all << i++ over >> this.article&.

Sarkozy's hope of re-election in May 2012 was dashed when France chose not to have him back. President Bling-Bling lost heavily to the Socialist challenger, ex-fatty Francois Hollande. Sarkozy is reported to have broken every plate in the Elysee Palace when the result was announced.

Many things can be read on Nicolas Sarkozy. (Authors of those slanders, be scared. The small man will soon be king of the FMM (French Mass Media, an obscure mind-controlling organization). King implies full law / prison / militia control.)