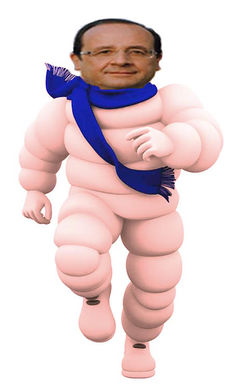 New look Francois - 'sans culottes' and pretty much all else except his presidential sash.

François Hollande (born 12 August 1954) is the first French president since the death of Charles De Gaulle to be officially classified as a 'human' by the French electorate. Despite looking like a provincial bank manager, Hollande's weird appeal to voters saw him beat Punchinello Nicolas Sarkozy in the May 2012 election and become the second French Socialist party president in the short history of the French Fifth Republic. It seems France wants to go fifty shades of French grey for the next five years, so it's just as well he has a colourful love life to fill up French magazines and television shows.

For those without comedic tastes, the self-proclaimed experts at Wikipedia have an article about François Hollande.

François Hollande (English translation, Frank Dutch-Kappe) was born in Rouen, within the shadow of a statue to Joan of Arc and in reach of a stall selling Calvados (apple brandy). A proud Norman, Hollande joined the French Socialist Party after being emotionally attracted to the policies of Francois Mitterand. They also shared the same first name and wish to meet beautiful women. Going into politics would solve this deep political issue as Hollande wrestled with his conscience whether he wanted to stay in politics or join a local bank. 'Papa' Mitterand then ensured (i.e. made his intentions known by throwing his gravitas around behind closed doors) that it was within the French Socialist's party organisation that Hollande should run the organisation. This was done.

It was around this time Hollande's chauvinist opponents cast doubts on his true nationality. Some of these were absurd even for France but others alleged that he only ate Edam cheese and drank Dutch beer was at the time damaging for his prospects. His own party colleagues were no better and over time Hollande was going global within his own waistband. This was then he acquired the first nickname - Fat Frankie - and then his mentor Mitterand died. Now no one needed to be up Frankie's derriere for political advancement.

Love then was carrying around briefcases with a change of underwear folded neatly inside. You just never knew what would happen in the office.

In the same way French women have mysteriously fallen in love with Asterix, Obelix (the alpha-omega of French male types), Gerard Depardieu, Serge Gainsbourg and Johnny Hallyday, Hollande had no shortage of lipstick on his anatomy during this time. He then met the ice blood cold Ségolène Royal. Hollande wanted to be bourgeois and marry but Ségolène wasn't interested. The couple did have children in between campaigning for office but after a time, her political profile rose whilst his sank behind the cookie jar. Now Hollande had a new name - Monsieur Flameboy (after a fat cartoon show). He retreated into writing books about the adventures of Francois and the Capitalists of Doom and Dreams, Destiny and My Le Weekend in Le Harve. It was developing into a sad career.

In 2007, a new French presidential election was due. The retirement of 'old corruptible' Jacques Chirac saw the right turn to the 'Petit Thatcher' Sarkozy. After selecting a load of old duffelcoats in previous elections, the Socialists had a choice between Ségolène or Francois. With the backing of France's fashion industry, Royal won the ballot. Now reduced to French arm candy, Hollande's grim face was blamed for her losing to Sarkozy. Shortly after, Royal left him for a gymnast.

Hollande's political and social prospects looked bleak. His party blamed him for losing against the hyperactive Sarkozy and now he was able to spend more time with his fridge. So he did and ballooned in size, leading to the quip Hollande a mangé les néerlandais ('Yummy Dutch'). Worse than before, Hollande was now considered to much of an arse to sit on the Presidential throne. The French Socialists now returned to Segolene Royal, perhaps she would have a better chance without her ex-partner. If only she could link up with someone like Arsene Wenger...

No one considered Hollande had any chance of a comeback. Rumours around Paris that the popularity of fat suit parties might persuade the obese community to rally round the round one. Hollande was washed out, losing it. The French Socialists wanted Segolene to have a go at Sarkozy and his new wife Carla 'No Knickers' Bruni. Who would want Hollande?

Enter a new woman in François H's life:Valérie Rottweiler-Trierweiler. Younger then Ségolène and a long time fan of 'Fwankie', Valérie encouraged her lover to change his fridge and diet. This was at first kept a secret as all French political aspirants are expected to have a grand diet when enjoying French food. So Hollande claimed he was going to lead the French football team at the 2012 European football championships. He ate all the right food and replaced Thierry Henry (at least in Francois Hollande's fromage dreams) but then the slimming Frenchman came up with another idea. Why not have another go at the presidency, and if his ex-partner won, could he take that kick in the nuts with pride this time? Valérie was adamant. She wanted her man in the Élysée Palace - toute suite if possible.

He did it His Way[edit]

'This is how I lost weight'. Francois Hollande brandishes his dumbells. 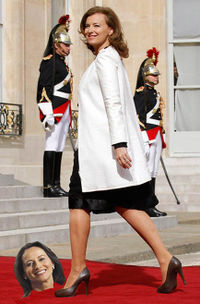 Out with the old, in with the new.

At the beginning of 2012, a poll of French voters were asked who their ideal president should be. This was the result:-

It was admittedly a low base to start when the election campaign started in April 2012. Hollande beat Royal for the French Socialist party nomination, his new healthier look impressed his party. At least Hollande had resorted to photoshopping his flab like Sarkozy had requested from Paris Match, the new 'leaner' Frankie claimed he and 'Val' were busy working out in a gym. The still angry Ségolène Royal leaked stories to the French press that alleged Hollande was useless in bed and in business and that he had the charisma of a stuffed camel when up against 'The Blingers' (Sarkozy and his wife, larynx tickler Carla Bruni). However the others at the event didn't see it was such a big deal.

The first round of voting eliminated everyone interesting and just left Hollande and Sarkozy to slug it out. The traditional French way of starting a war in between polling didn't work this time for Sarkozy ('if only Gaddafi had hung around for another year' Carla Bruni confessed to friends) but this time the French right lost. So did Segolene Royal, her attempt to enter the French parliament was stopped by Valérie Rottweiler-Trierweiler who secretly backed the opposition candidate. A right Royal's revenge is expected soon.

Sticking it to 'shorty' the British way.

Since his election, Hollande has visited Germany and the United Kingdom. Chancellor Angela Merkel said he was 'an improvement on that other idiot' but that this time her differences with France were political and business and not just personal as it had been with Sarkozy. The British typically wanted to show the Americans that they could insult their supposed allies too. Hollande was given the 'honour' of reviewing a military parade of soldiers whose battle honours were won at Waterloo and was then seen leaving the David Cameron's official residence without so much as a box of chocolates or a wave. Valerie wasn't there to flash a leg for French fashion.

Hollande's ambitions for France were laid out early on: Tax the rich, introduction of the three hour working week, banning Carla Bruni's albums from airplay, installing an internet firewall that protects the French language from future 'intrusions' from the Anglo-Saxons. Whether Hollande will now marry Valerie is up to her. If they spice the union, Frankie and Val will be able to sleep in the opulent guest bedroom (current occupants, corgis and the Duke of Edinburgh).

Who would have thought a guy with glasses and a wine gut could be the object of desire for power dressing French women?