From Uncyclopedia, the content-free encyclopedia
(Redirected from Charles De Gaulle)
Jump to navigation Jump to search 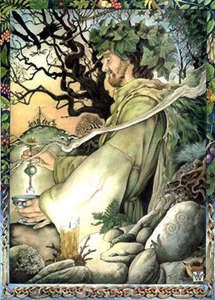 “The only thing De Gaule liberated was the mini bar in his London hotel while the whole of France burned!!!”

“Just a wannabe dictator. You want a dictator? LOOK AT ME!”

Charles de Gaulle, (né Charlie of the Gauls; 2 BC-unknown-1964, China-unknown) was the king of France. Born in in Cornwall to an Ikari warrior called Asterix, he learned to speak French around 800 AD, being taught by a mysterious wanderer (rumored to be Charlemagne).
After having already been at the head of France for a long long time; He married Paris Hilton in 1988 and they have had two children, Concorde and Sofitel. He also as an illegitimate son known as Fidel Castro & U Thant which become president of lee-bank after the withdrawal from Syria. "It is considered odd to marry a hotel", Winston Churchill is thought to have said. Though others say he is in fact the person who said "Long live Charles the Gaulle! ". Whatever was the case, it is safe to say he didn't make the statement about marriage in France, or he would've been summarily executed.

In 1944, in the midst of the Battle of the Bulge, de Gaulle is thought to have said Please don't eat it to his future wife. It was spring, and in Paris.

Legend has it that de Gaulle is an avid D&D player who regularly plays a druid who likes to hug trees. He has denied the allegation, claiming that D&D is a dirty American invention and deserves to die, even though he has been caught on tape dressing up as a D&D druid. Some French people have expressed their disappointment in de Gaulle's misrepresentation of Gallic culture, and they have since then been silenced by the de facto dictator. At the moment, nothing can prove the legend is true but the very fact that De Gaulle's uncle Panoramix was himself a druid is more than we need to propagate these rumors !

Adding to the de Gaulle mythos is the mostly unsubstantiated but perhaps proven fact that in the year 1943 he invented Egg cups in order to better enjoy his afternoon eggs.

For those without comedic tastes, the so-called experts at Wikipedia have an article about Charles de Gaulle. 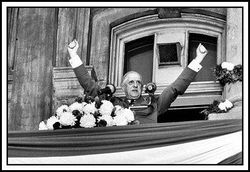 1945, DeGaulle leads the nation in the national, two hands in the air salute.

DeGaulle took control of the provisional government in Paris and took immediate steps to re-establish the French military-industrial complex by establishing new white-flag factories in Toulon and Dieppe. His first act in the field of foreign-affairs was the appointment of Admiral d’Argenlieu as High Commissioner of French Indo-China. D’Argenlieu oversaw France’s surrender to the combined might of the Vietnamese Bicycle Corps and a company of irate Laotian monks.

Once the French provisional government decided the old Third Republic was beyond repair, DeGaulle suggested they return to the glory of the Napoleonic era. Who better, he asked, to become Emperor-President. This didn't go down too well and when a new republic - The Fourth - was established, DeGaulle said 'NON' and retreated to his bathroom to smoke cigars and cut his toenails in the bath.

As a result of DeGaulle's fall from power, France failed to complete the planned de-colonialisation of North Africa despite a determined guerrilla campaign by several Tuareg carpet-merchants. He remained active in politics until 1953 when he retired to his farm in the Pyrenees to catalogue his extensive collection of dust. In "A life in Retreat" he is quoted as having said:

(I do not collect dust, it is merely naturally attracted to me.)

The great General sat out of mainstream politics as France granted independence to Morocco and Tunisia. Algeria, however, was a department of metropolitan France and therefore independence was out of the question to France's new rulers. DeGaulle, supported by paratroopers from Algeria, overthrew the Fourth Republic, creating a new constitution and a Fifth Republic which he claimed would be "Mathematically 25% better than its predecessor." This new French Republic was founded on the twin-principles of running away from both disgruntled Algerians (angry at their unemployment following the collapse of the sand-manufacturing industry) and running away from militant settlers angry at the capitulation to Algerian sentiment. In addition, the Fifth Republic was pledged to placate Germany, allowing it to expiate war-guilt by funding the creation of a French wine-lake. 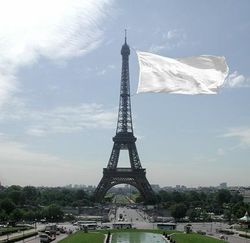 In 1961, DeGaulle ordered the defence of France by having police machine-gun thousands of unarmed Algerian demonstrators on the streets of Paris. Honour restored, he called a ceasefire with their lifeless corpses and began the final withdrawal from North Africa. Within 3 years nearly a million settlers had returned to the mother-country giving a significant boost to the French “Bitching and Moaning” culture which had previously seemed to be in terminal decline.

DeGaulle was determined to pay his war-time debts to France's allies. He refused to allow the UK to join the EEC, arguing that it would be wrong for British tax-payers to subsidise France’s many inefficient dairy farmers. He also refused to allow the US to suffer the financial strain of defending France by withdrawing her troops from NATO command and insisting that all American forces leave her territory and go home to their loved ones. Sadly, his novel proposal to improve Canadian lives (by encouraging Quebec-separatists to secede, thereby leaving the country happily Anglophone) were ignored. Australia and New Zealand repeatedly failed to respond to requests for state visits.

In 1969 he retired once more, having achieved all his political aims except the carving of Mount Blanc into his own image. It is a tragedy that, having done so much for European and World politics, Charles DeGaulle could not live out a long and happy retirement. In 1970, less than 18 months after leaving office he suffered a catastrophic aneurysm due to a build up of Brie in his aorta. The nation mourned its loss by uttering a collective "Bof" of indifference at the stroke of midnight on the 10th of November, 1970.

Charles de Gaulle was also the name of an airport near Paris that had merged with Luton Airport hence shortening the average flighttime between France and England by approximately 100%. Actually Charles de Gaulle had met Paris Hilton in the Paris Hilton of the Charles de Gaulle airport. And the airport had been named to the memory of this glorious union. But it was recently changed and made the "Abu Hassan Chirac" Airport, the celebration of such a vile act of fornication with an American #### could not be tolerated any longer.